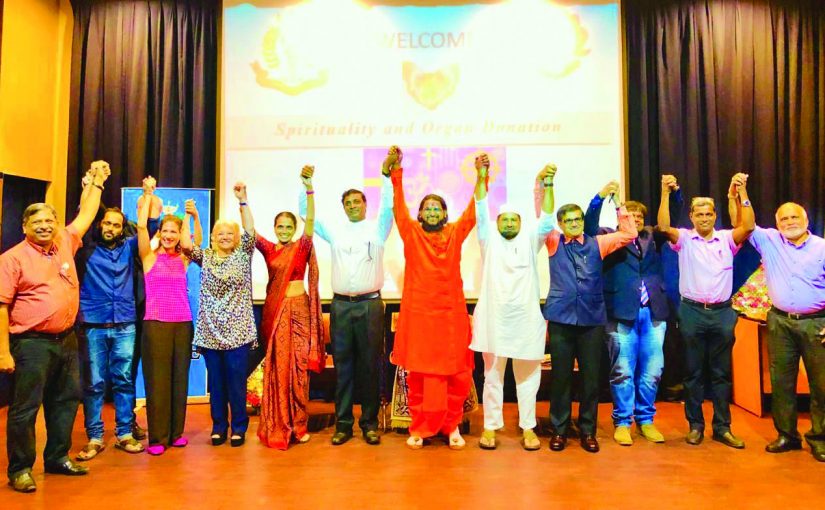 PLEASE DON’T TAKE YOUR ORGANS TO HEAVEN! In a bid to encourage more Indians to think about the noble cause of organ donation IMA Goa screened an inspirational film `Phir Zindagi’ in an out-of-box symposium at the Goa Science Centre hall on July 27, 2019. Maulana Mohammed Zafar Alam Nadvi, Reverend Father Donato Rodrigues and HH Sadguru Brahmeshanandacharya Swamiji ,who were amongst those who addressed the gathering, cleared whatever religious doubts there may be on the subject of organ donation in the religious mind. The event concluded on a cheerful note with everyone posing for a pic (left to right) Dr Shekhar Salkar, Rajtilak Naik, Dr Ana Franca with a friend, Dr Medha Salkar, Father Donato Rodrigues, Swami Brahmeshanandji, Maulana Zafar Nadvi, Dr Anil Mehendrita, Dr Amol Mahaldar, Dr Ruphino Monteiro and Dr Dalvi…

THE Assembly is an august place where elected MLAs legislate. That is, make laws. When a member says something on the floor, the Opposition has a right to counter it. As a result, if there is no objection, it is automatically assumed, especially by the uninitiated , that such utterances are true. This is under normal circumstances.
The present Assembly in Goa has 10 members from Congress, who crossed over and were rewarded with ministerial posts, etc. Another party, the Goa Forward, was part of this government for a short stint and very careful of not rubbing the government the wrong way: They never know when they may be needed by the government again! The BJP party disclosed that the remaining Congress MLA s had also wanted to “cross over.” The ruling party has a former Congress member who had cases filed by the BJP against him: Till he crossed over. For all practical purposes the present Goa Assembly has only one party!
Senior Rane took advantage to kill two birds with one stone. He blamed the present mining crisis on an NGO, even calling for their externment. No one countered that it is the Supreme Court which banned mining due to the government illegally favoring illegal mining companies. With this, he practically made a truth out of a lie. That an NGO is responsible for the loss of livelihood to thousands, implying the use of illegal means in the same. He also curried favor with his voters by diverting their minds from dwelling on his continued silence in the house, thus ensuring he is first on the waiting list for any future “eventualiy.”
Now, how is this thinking different from that of the taxi drivers? Thirty-five thousand taxis refuse to fit meters, against to a court ruling. Will GoaMiles not kill their livelihood? Here, the government is standing firm, even though GoaMiles managing director says they are charging almost double the rates! In effect, it is just changing the baton from the taxi operators to another with a few peanuts to the consumer.
Next, we saw an independent MLA state in the house that a former GFA president swindled out `33 lakh! Surely it is possible for the auditors to find out the same, especially since the current GFA president is the MLA himself. Here too two birds are being killed one stone. By doing so, he is misusing the house to fool the electorate.
The house has a speaker, who is like the judge, and must ensure such remarks are struck off as no evidence has been put forth. This did not happen. Because there is only one party.
‘Corruption’ has sought its own level, like water, and now all members are working in a ‘comfortable’ setting.
What we are witnessing is just tiatr! Just as the courts take suo moto cognizance, the Tiatre Academy must enroll the same in their annual awards. I am sure our hard working tiatriests will not grudge this.
Next we have all the whole house focusing on football – something dear to everyone – spicing up tiatr. The present GFA president and MLA had promised to get back all the football grounds hijacked by SAG, to the villages. This was an apt time to speak up, but he failed.
Iceland advanced to the WC by creating indoor stadiums emphasising the need to give back the grounds to the villages. Note that football is used in Brasil to turn youth away from drugs AND produce world class players.
Comedy, suspense, tragedy (for GF): We have it all.
— R Fernandes, Margao

POLITICAL ANIMALS
The latest wildlife census by the Government of India has revealed that Goa still has three Tigers around. But with those ten Congress MLAs jumping ship overnight to embrace the BJP for the lust of Power and that very huge Casino sponsored Moolah, do we call them ‘Makodd’, ‘Reddo’ or ‘Paddo’. In addition to these three, our MLAs emulate the antics of many more wildlife species.
In fact you could create a whole Zoo with them! Some are like Chameleons and other insects that change their colour. Some are like Leopards that will never change their spots of greed. Some are as slow as snails and tortoises to effect any meaningful change for the good of Goans. Some are like frogs hopping from one pool of loot to another and croaking if they don’t get enough of their share of loot or a ministerial office. Some are like soft bellied octopuses ready to change shape or principles at anytime as long as their eight tentacles longer than the arms of an octopus are firmly entrenched in many sordid pies other than what they get elected and entrusted to do. Some are like crabs constantly trying to pull the other person down.
For Jennifer Monseratte who shamelessly also joined that motley saffron bandwagon defies logic and she would have to be given another name. Needless to elaborate!
MLAs that betray the voter, their paymasters, must realise that these party hopping antics will backfire once the honeymoon period ends and they restlessly start jostling again for the various kodels of power and commission. After all old habits die hard and he that pays the piper always calls the tune.
These notorious Ten now disgraced Congress MLAs have betrayed their Party and the voters who elected them. Even those in the world’s oldest profession fare better. These MLAs need to be hounded and must face the wrath for their political chicanery. God Save Goa.
— Aires Rodrigues, Ribandar

ENVIRONMENTAL TERRORISM
ALL the action taken by the government of Goa and the GMR — with the tacit approval of the Centre — and even laying of Mopa Airport foundation stone at Bambolim (40 km away from airport) by none other than the Prime Minister of India, is nothing but State-sponsored environmental terrorism.
The Mopa peasants have been given a measly compensation of 300 per sq mts of land when actual market value is at least4,000 to `6000 per sq mts. This is institutionalized loot of the poor who have told this writer that they have never seen big money in their lives. It’s the GMR who benefits maximum after cheating and displacing villagers, and with scant respect for activists protesting against such environment as human tragedy.
Mopa airport details have been enshrouded by the Officials Secrets Act to deprive journalists from conducting prudent assessment of ground realities. The 14 houses built for displaced Dhangar families have already seen ceilings and wall plasters falling apart within no time of being occupied. Forcing them to return to their old rustic homes. All environment norms have been thrown to the winds by an unscrupulous State sponsor of the project and there is the prospect of 54,676 trees facing the axe — all because of the greed of the Centre and State governments in collusion with GMR. They have deceiving the people affected all along with subterfuge and lies.
The Supreme Court directive to transplant all 54,676 trees is unlikely to be ever implemented. Goa and Goans must realize that the Mopa plateau is a plateau richly endowed with flora and fauna and if it is destroyed for an airport, along will go an estimated 46 springs of natural sustaining water. Some 100 inches of rainfall will also be gone with the wind.
Never in the history of Goa have so many trees been sought to be destroyed to cater to a single project which is being opposed in the Supreme Court by the Federation of Rainbow Warriors – battling against all odds to save the Mopa plateau which is deemed to be an extension of the Western Ghats designated by the United Nations as a protected zone
— Elvidio Miranda, Panaji