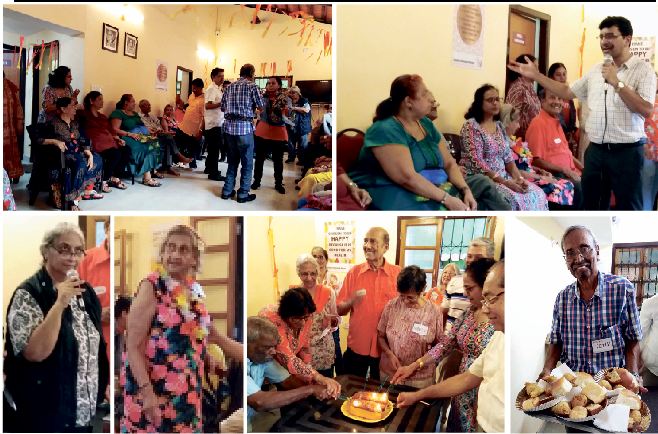 Whoopee Wednesday at B N Melvani Recreation Centre: (Clockwise from top-left) Catching up with others, Dr Amit Dias clueing up seniors about what to eat more and what to eat less, Tony handing out birthday snacks, birthday boys and girls cutting cake, senior Marie Azavedo and mistress of ceremonies Saloni

FOR seniors in Panjim (although I prefer Panaji which has a softer sound) the BN Melvani Recreation Centre at Fontainhas has come as a much-need blessing. It’s an old home refurbished into a new home, but one which is used as place where senior citizens may come in for some peaceful recreation. It’s also become a place where something or another is happening almost every afternoon or evening. If you have nothing better to do at home or are getting tired or lonely or bored or just looking for something to get engage with…you may turn up here to read newspapers of the day, read a book, play a game, work out at a stationary cycle and other sporting facilities fixed in one room Sip your tea and crunch into a biscuit or two if it is served while you’re there!
There’s more. The place has become a beehive of activity of the useful kind and you may catch a talk by professionals, for example, doctors, counsellors, service providers — and best of all once month on Whoopee Wednesdays get into a jamming session mood, cut a cake along with others who share a birthday month with you. It’s a collective birthday celebration like no other and a brainwave of an idea in creating togetherness, talking and jelling with one another. You will be surprised how many want to celebrate birthdays collectively to have some out-of-the box fun with or without family, only friends and sometimes strangers meeting for the very first time. Nothing like a birthday party to break the ice!
I’ve been attending some of the talks and at least one Whoopee Wednesday and am in admiration for the group of great girls and guys (oftentimes seniors themselves, mostly all over 60 plus, plus), who put together the month’s packed schedule. I’m just about getting friendly with say Saloni and Suri (part of the key organizing worker bees or so to speak), and Cyril and Felicity Fernandes, Marcia Fernandes, Tony Rodrigues, Gracy, Komal Melvani, Kalpana Deshpande, Udyan Talauliker, Anil Amonkar, Prakash Shirodkar, Dr Vinay Suralkar, Florence Batra, Ulhas Gaitonde, Errol Pires, Shakerdas Gopani, Shabana Motwani, Medha Salvi, Jose Joao, Antonio Baretto and some more as they come and go according to their convenience, not least of all state of mind.
Oh yes, one may imagine how depression haunts many a senior citizen alone at home, while the rest of the family is out buzzing away at various duties or errands from morning to night — and no one at home except perhaps a maid or caretaker if one is affordable. Take time off to talk to any of the seniors patiently and their myriad fears will surface slowly as they recount how they’re doing their best to live with dignity, be it even at the mercy of younger and busier folk around them at home.
Well, my dears, no fears, anymore. For a one-time payment of `500 one may seek life anew at the BNM Recreation Centre for Seniors where at one of the gatherings you are bound to meet up with something or someone or another to listen to you and help you sort out whatever bedevils you.
Look at the August schedule put up on a common board: Aug 1 had a talk on “Heart Attack, A New Look at the Old Devil” by Dr Vinayaga Pandian (consultant cardiologist, Manipal Hospitals), Aug 2 the talk was on “Geriatrics & Homoeopathy” by Dr Sweta Gandhi (Homoeopathic physician, North Goa District Hospital, Aug 5 it was “Watch out — Safe Living for Seniors” by veteran journalist Prakash Kamat, Aug 6 in an interactive session psychiatrist Dr Akshada Amoncar spoke “Common Emotional Problems in Elderly”….that’s done and over with. On schedule on Aug 8 was a talk on “Internet Banking” by Akbar Khan, on Aug 10 an osteoporosis check-up camp courtesy Dr Shekhar Shirwaiker in association with the Rotary Club of Panaji Riviera, also upcoming events include “MIB, My Intelligent Brain” by Vernon Marshall, “Legal Protection to Senior Citizens and Parents” by Dr Sandhya Ram (assistant professor, VM Salgaocar College of Law), “Understanding Our Goa of the Past” by historian Sanjeev Sardesai….and more, do double check it on the board or call Saloni on tel.no.9820180349 who has ever willing ears to listen, next best call the centre.

I’M getting fond of this BN Melvani Recreation Centre and its seniors although I don’t get to run off to it as much as I’d like to! That’s a good thought though although most times I try not to think of myself as old, mostly in agreement with what the late evergreen Hindi filmstar Dev Anand who once told Simi Garewal in one of her famous interviews with film stars, something like “I will never grow old!” And he didn’t, can you think of Dev Anand or Shammi Kapoor as old? I can’t! For love of all the pleasurable films they’ve treated us too! This is to say one of these days go say hello at one of the BNM Recreation Centre do’s for senior citizens, you never know what it may do for you by way of cheering yourself up on a blue day in the dumps at home.
GO EASY ON SALT!
TO move on to another topic let me come to the subject of organ donation which quite a few doctors and clubs have been chasing for quite some time — with consciousness raising programs.
Honestly, we Indians need to become less religious and more sensitive, and forgive me if you don’t like me saying so! I think the time has come to take it easy on the religious front…also, I do think all homes of God (temples, churches, masjids, monasteries, etc) which go empty most times should double and treble as community places where anyone may get a meal, shelter for the night, and help to get a job if they need one. Seriously, no joking, the times we’re living in are becoming nasty for so many of us who’ve lived full lives, having made many a sacrifice for family and friends, but at life’s end find ourselves floundering with a host of mixed dilemmas….sometime outright broke, helpless and on our knees.
But to stay with organ donation I’d gone to the IMA Goa State event at the Goa Science Centre on July 27, 2019, on the subject of “Organ donors give life even when they’re gone.” The short film screened “Phir Zindagi” is an eye opener on the nitty gritty of how we Indians think and both Naseeruddin Shah and Ratna Pathak put in incredibly low-key performances along with others to tell us why it makes sense to donate our organs when they are of no use to us at the time of death.
The film is very sensitively effective and should be more widely seen so that more of us realize that to be a real good Samaritan is to donate bodily organs. That is, once someone is medically declared brain stem dead. So that bodily organs may be harvested in time to be matched and used for patients on a waitlist, waiting to live or die depending on whether they get a matching organ or not from someone who’s already said goodbye, cruel world.
According to the lively Dr Ana Franca whom I chatted a bit with — she is former national transplant director of Portugal — one must look at how efficiently the organ donation network is working in some countries like say Spain, where most folk think it’s okay for organs to be harvested in various traumatic cases, when a patient is declared brain stem dead while on ventilator. It’s the best way to be human and humane.
Off the cuff I asked her why so many kidneys are in trouble and she quipped, “Salt, salt, salt! And high blood pressure…we’re eating way too much salt in our diets and that’s what takes a toll on kidneys and bodily organs.” How much salt do we need, actually just a pinch, not even a teaspoon of five grams as usually recommended by most nutritionists in the know. Hey, think of all the packaged salt, sugar and hydo-fat laden snacks we consume day in and day out in our life!
Oh yes, Dr Ana says there’s a huge need for organs in the West — kidneys, livers, hearts, corneas, skin — but kidneys and livers maximum. Luck may play a role in all this but first a society has to be convinced and the smallest medical and legal systems in place….then there’s no reason why we should not permit a brain stem dead patient’s bodily organs to go to another patient urgently in need so that he/she may get a new lease of life. Usually, she said, doctors decide to whom the organs should go, “Older organs may be recycled for older patients while younger organs for younger patients….” A decision is taken with appropriate medical consensus.
So, my dears, as IMA Goa President Dr Anil Mehnidiratta in his address asked, why do you want to take your organs to heaven? Please don’t take your organs to heaven! Memorably put, I must say. But you make up your mind on this subject yourself, my dears, there’re several researched readings as far as brain stem death definitions are concerned from situation to situation. The brain is surely our most fascinating and challenging organ of them all! It cannot be harvested and transplanted to a patient in need of another brain dead or alive. Joking, okay.
ON that note I’d say be more organ donation friendly, first go check your salt intake today and cut down on your salt consumption, and it’s avjo, poiteverem, selamant datang, arrivedecci and vachun yetta one more time here for now.