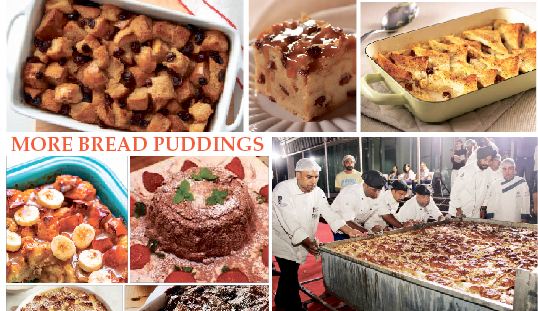 DON’T ask me why but I’m suddenly feeling nostalgic over something I’ve not tasted in ages! I’m actually pining for it… guess what? A good old traditional poor people’s (and sometimes rich people’s) comfort food called bread pudding the kind I used to relish at an English friend’s home once upon a time. It came warm, buttery, crunchy at the edges and tops…ah, bread pudding, redolent of cinnamon.
(Sigh) There is bread pudding and bread pudding of course and you must know the English get nostalgic about a good old-fashioned bread pudding served hot or cold. Yes, I had an English girlfriend (long since gone with the wind) who used to entertain me with her reminiscences of English bread pudding, she’d married an Indian Guju man dividing his life between London and Mumbai. Occasionally, I’d be over to her place and she’d offer me a slice of English bread pudding, sometimes it was the old-fashioned steamed kind which is served more like a wedge of cake studded with dry fruit and spice. From the fridge was fine.
But I like the other kind of bread pudding where you put buttered slices of bread in a pan, pour over egg battered cinnamon-flavoured cream… dot with buttered fresh whipped cream and bake till golden crisp on tops and edges. Eat more or less hot and creamily, crunchily delicious. The reason why I’m mooning over bread pudding this week is because a whole lot of celebrity chefs led by Kunal Arolkar out at the Trinity Hospitality expo at the Dr Shyama Mukherjee Stadium last weekend, baked a gaguantan Guinness record breaking bread pudding… sorry, I couldn’t make time to go out and see. But Laurence Gomes of Cook India who was there tells me they used something like 2,000 slices of bread, 5,000 litres of milk, 9,000 eggs…sugar? It was one grand bread pudding which eventually got distributed to one and all and to special orphanage homes of the Street Providence people.
Let’s say reading about it has provoked my present simmering nostalgia over bread pudding — bread pudding can be so mundane (yes, stogy) yet a good crusty bread pudding (the kind I like, buttery and crusty with warm cinnamon at heart) is to die and live for! These days my mind is flooded with thoughts of bread pudding and I don’t know why Panaji bakeries don’t stock it, I remember in the old days some cake shop or another would have bread pudding but today I can’t even find it at my favourite Gauri Karkal’s Pastry Cottage — looking for bread pudding here I ended up buying their new offering of truly divine lemon cake (`250).
I suppose we in India who’re Westernized and studied in Christian missionary boarding schools must have some feeling for bread pudding! Considering out British colonial history and old Indo-British cookbooks will have recipes for various kinds of bread puddings ranging from the common quick kind when all you did was use up leftover bread by pouring whisked eggs, sugar pinch salt, vanilla essence, cinnamon or nutmeg in a bowl, and poured over the bread before baking.
Bread pudding probably went out to America to become an exotic affair served with custards, chocolates, jujubes and all manner of other garnishing added in or atop the pudding…in England though the plain bread pudding made of leftover bread started out as a frugal sweet treat in 11th-13th homes of the poor. I suppose upper crust British people would still sneer at bread pudding unless it was tarted up with butter, dry fruit and spice!
One of these days I must do my favourite crusty, buttery bread pudding at home, although my oven has konked out. I will use Goan bread like undo or poie and I dare say I could spike my bread pudding with Hansel Vaz’ excellent Cazulo premium coconut feni…tasted it out at the expo and like it more than caju feni. Good coconut feni is hard to find because few are doing it, it’s almost going extinct. The Hansel-Mac Vaz brothers have done much to get Goa’s classical feni credited with its geographical index, that means exclusive to Goa. There were lots of useful freebie tastings out at this expo and that’s something I like! Who doesn’t?