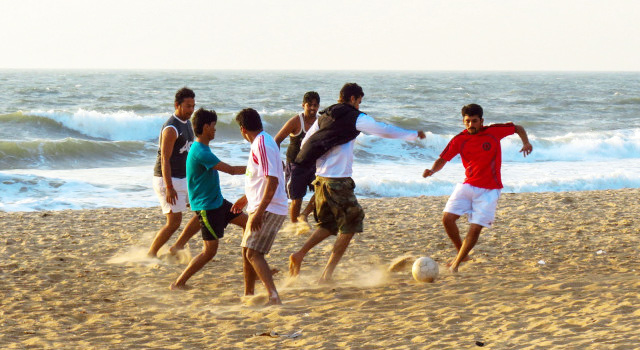 FAR TO GO: Youth in Goa enjoy beach football, and you will often find both boys and girls playing five-a-side games. However, for Goan football to regain its glory, a lot more has to be done!

Goa’s favourite sport — football — has seen many ups and downs over the years. With construction booming, local playgrounds are vanishing and the future is clouded. Infrastructure and professional management are essential at all levels

FIFA replied to the letter from 6 I-League teams asking them to co-operate with the AIFF. This is not unexpected. In any industry, professional corporate management will always support regional managers and not interfere in their day to day working. But on the flip side, they will keep a closer watch on their workings. FIFA will now watch AIFF closely. We know what happened to Hockey in India with FIH coming directly into the functioning of the Indian Hockey association that existed then.
The I-League teams need to build up a good case on AIFF functioning to ensure they are not side-lined. The management of ISL affairs — which must be entirely with the AIFF — is a moot point that can show AIFF favouritism. If football is to be a winner, then the sycophancy exhibited in the management of the ISL must stop. There is every possibility that, as the ISL number of teams and duration increases, the standard will fall back to I-League levels.
Politicians handling sports affairs has always proved disastrous. Businesses however, always need the former to profit by disputable means. The GFA is another example. What GFA requires today is professional management: which neither the politician nor ex-players can provide.
The GFA is struggling to win the now un-important Santosh Trophy. The Pro League needs to be upgraded by innovation. Today, innovation has seen small companies ‘eat’ bigger companies reversing the past trend.
The GFA is in a state of inertia: cultural inertia and structural inertia. They are resistant to change and innovation. In a stable environment they will meet success, in a changing environment, failure.
With the ISL headed for the top league position ,and only one Goan team in the I-league, local players are struggling to get into the national team. They already are in a crisis that demands an innovative solution.
They are stuck with organising the locals leagues, selection of State age group teams etc. They have no objective: increase the standard to be on par with Asian teams and increase local payers to 50% of the National team. Declare these objectives at the beginning of the year and get the right people to achieve the same.
An of the cuff innovation I would propose — besides the leagues, select U-21 and over 21 teams, one each from four zones. Let them practice together zone wise once a week. After two months let there be a league, with matches played once a week. Let the winner represent Goa in the Santosh Trophy.

Set up a four-member team of past football greats to study and correct players. In the Intercontinental Cup the four Goan players were lethargic in the match against N Korea and replaced for the last match. Analyse what went wrong. A coach can give a plan for the match, but if nothing goes right the players must innovate on the pitch. They did not do this. They must get back to their inherent culture of keeping the ball and commanding play: one touch depends on the alacrity of the team mates too. They must be tuned to be generals not soldiers.
The GFA must study the coaching methods being used at major academies and clubs — changing styles often will not help. The inherent footballing style must be enhanced by the right style of current leaders: it is counter productive to start a style which negates this as you are going back to step one! Past footballers claim the present lot has everything and therefore is not motivated enough! Instead of decrying this turn it to their advantage.