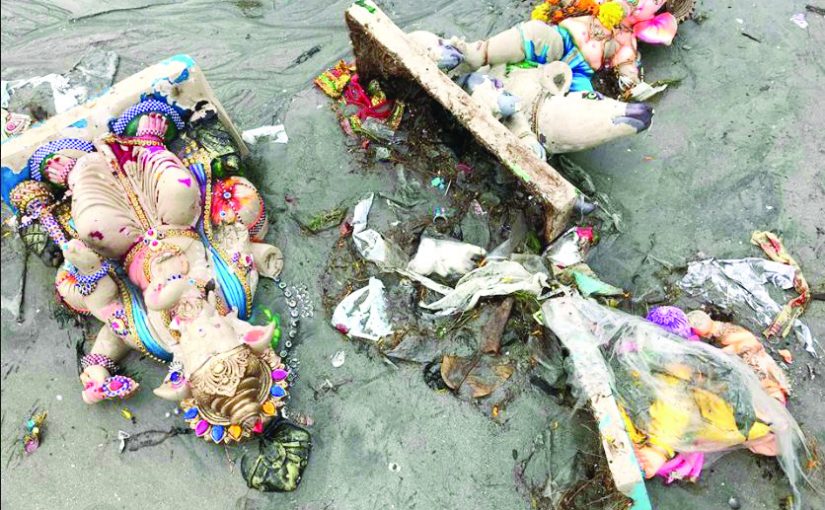 DAMAGED: On the morning after the immersion it is very sad to see headless Ganeshes and Ganeshes without limbs or trunks on the beaches of Caranzalem

And a few stray thoughts on landing back in the hospital.
It started on Sunday. After returning from a party I was going for a bath when I slipped on the floor as the maid had not wiped the wet bathroom floor. She is among the ones whom I am planning to sack very soon. For her it may have been a small act of carelessness, but she did not consider the consequences of her failure to follow instruction. There was a glass of water on a stool in the bathroom. When I fell the glass crashed and broke, and all of a sudden I was lying on scattered glass pieces on the bathroom floor. I felt just like Bishma, the father of the Kauravas, who was left to die by the Pandavas.
The whole of that evening and the next day I got fever on and off. The frequency and the intensity of fever increased on Monday. We wondered whether we should go to the Goa Medical College Hospital. My previous experience is that even on a normal day it is difficult to find the doctor you want there and there was no chance of getting a medicine specialist on Tuesday which was incidentally a public holiday. Surely government hospitals which are supposed to serve the public should not be allowed to shut down on public holidays, as the poor have no options excepting the GMC and the public health services. Most private hospitals do not accept the DDSSY card and loot you.
Fortunately, I was privileged enough to check into a private hospital, Menezes Polyclinic at Altinho, as I have independent insurance. So we landed up at the Menezes Polyclinic by noon on Tuesday. Within an hour we got the dreaded results that it was dengue. One of the residents confused my wife by mentioning that there were four types of dengue. So Tara harassed her into finding out what form of dengue I had.
It is impossible to check into a private or public hospital in Goa or anywhere in the country unless you have a personal attendant. Indeed, many hospitals insist that at all times patients should be accompanied by a personal attendant. This makes it impossible because you cannot expect the better half to spend the whole day in the hospital. Both of us are from outside Goa and we do not have close friends and relatives in Goa who will come and help us out. I thought I had a lot of friends when I was editor of Herald and later when the Goan Observer was selling more than 15,000 copies. But since the support for Goan Observer has fallen due to threats from the government and fears of industrialists I have discovered that I have very few friends.
The only people who visit me these days are those who have got into some trouble and want my help to know how they can come out of it. The only choice is to hire somebody full-time as an attendant.
Fortunately I was lucky enough to find an attendant whom I know very well to stay with me the whole day. The only problem is that instead of speaking in Hindi he attempts to speak in English. Half the time when he is using an English word I cannot understand it because it is Hinglish. I believe that courses should be conducted in spoken English for health care workers.

And a few stray thoughts on tracing the flight path of the dengue mosquito which bit me and landed me in the Menezes Polyclinic.
The flight path or the train path of the Bihari migrant labor who come to Goa by the train load by the Patna Express to seek jobs in Goa is well known. For the last two decades ever since Paswan was the railway minister, he was persuaded by Mauvin Godinho to start a train for his migrant vote bank to provide labour for the fast developing Mormugoa Port Trust. According to the TOI of course, which released data of the 2011 census, which is ten years ago, the third largest group of migrants coming to Goa are from UP. It has been my experience that all the hairdresser and barbers are from Lucknow. This is despite the fact that there is no direct train from Lucknow to Goa.
But to come back to the flight path of the dengue mosquito which bit me, I discovered some members of a joint family had come to spend the Chovoth week at Dempo Bhat in Tonca. Apparently, they already had dengue which can stay dormant and manifest itself anywhere from 4 to 14 days after being bitten. The first victim of the Ponda dengue was the younger son of the older boy of the matriarch of the family. It was tragic for the family as they had to divide their time over anxiety over the young child and their Chovoth celebrations. Soon enough other members of the host family — as many as four of them — contracted dengue.
The problem with dengue is that it exact origin cannot be traced. You may have gone for a party at a 5-star hotel. You may have gone for a walk on the beach side. You may not even have felt the lightning strike of mosquitoji. In fact one of the most powerful aircraft in the Second World War was called the Mosquito.
The mosquito which infected you may choose another romantic couple to get friendly with. Dengue is more of a human to human transaction. Unlike in the case of malaria there is no protection against dengue. In the case of malaria you can go the Health Department and get Quinine tablets free. No amount of fogging has any effect on dengue mosquitos. The most dangerous time is the period after a heavy rain when water accumulates here and there in small pools. Against dengue you cannot even protect yourself with Odomos or by carrying All Out like a candle at night. Because the dengue mosquito is a broad daylight hunter. The dengue mosquito is most active two hours after sunrise and goes back to sleep two hours before sunset.
It is called the rich man’s disease as the largest number of cases have been reported from gated colonies. Dengue breeds not in dirty water but in clear clean water. So the path of the dengue mosquito is not from Kolhapur as the Kolhapur residences are flooded with water. The dengue mosquito does not come from Hubli or Belgaum because the construction labour there does not work under hygienic conditions. It breeds in the rose flower plant that you are so proud of. It breeds in a flower vase where you kept the flowers so proudly.
I cannot answer the question of how you can deal with the dengue mosquito. All I know is that I have had dozens of injections, eaten even more dozens of very sour tasting medicines, and have lost my appetite not only for food, but for life.

WALKING ON THE MOON

And a few stray thoughts on the dismal fact that despite the talk of immediate action on potholes after the rains subside there are still no sign of action.
It is partly the fault of the weather as this is the first year when Chovoth was literally washed away by monsoons. It poured continuously from morning to evening. The rains restricted the movement of people as brothers and sisters and nephews and nieces could not visit each other. This may not be such a bad thing. Indeed the movement of people from dengue-hit areas to dengue-free areas will only spread the epidemic.
We not only welcomed Lord Ganesh with continued heavy showers but also with dengue. We do not know if like human beings Lord Ganesh will also be affected by dengue. But the seven-day period is over and in any case most Ganeshes have been immersed, waiting for fudlya vorsa to return when the civic body will be a little more welcoming to lord Ganesh and the potholes will be filled and most importantly there will be lights at the immersion points.
Personally I believe it is a criminal waste of time and money that very artistically made images which are prayed over for three days or seven days or ten days should be immersed and vanish in five minutes. I am not talking from fiction but from personal experience. I saw this first as a reporter with the Indian Express when we decided to check on the state of the Ganeshes at low tide the morning after the immersion. The beach was full of headless, armless and legless Ganeshes.
Similar things happen on the Miramar and Caranzalem beaches the day after the immersion. Since most of the images are plaster of paris they don’t dissolve completely. Either we have to have biodegradable Ganeshes or stop immersing Ganesh and keep him permanently so that we don’t insult our elephant-headed God.

And a few stray thoughts on the pathetic sight of huge number of candidates standing in a queue for an application form for one of the 1000 new jobs that have been announced in the GMC.
Not surprisingly the forms were not made available online as the policy of the Health Minister Vishwajit Rane is to make money at every opportunity. Every candidate had to pay 50 for the application. I could have understood if the applicant was asked to fill up the form and pay when submitting it at the designated counter. But this50 was only for the plain application form.
I have no doubt that there will be another mad rush to submit the completed fees for which there will be a fee of `500. Then there will be an interview but we will not know how much money changed hands as the interviews will be held in private.

And a last stray thoughts on our own star of astronomy Percival Noronha.
Percival Noronha was primarily known as a historian and died recently at the ripe old age of 94. Percival started as Director of Tourism. It was Percival who revived the good old Carnival which had been suspended by the new Indian government. Although later Percival himself regretted having revived the Carnival as he did not expect it to get so commercialised.
Percival was a living, walking, history book on Goa’s heritage archeology and culture. He was available to any research scholar who wanted to share his infinite knowledge.
Besides research, Percival’s greatest passion was astronomy. He set up the Astronomy Society of Goa. With like-minded friends they managed to acquire the telescope which was placed on the top of the Junta House. Once a week and particularly on significant astronomical occasions like eclipses, black moons and more recently the Chandrayaan-2 could be observed. The Astronomy Society was strengthened when it collaborated with the Goa Science Centre. If young people are enthusiastic about astronomy and want to become rocket scientists it is because of Percival. Perhaps when Chandrayaan-2, the lunar rider, lands on the moon, it will find Percival there.