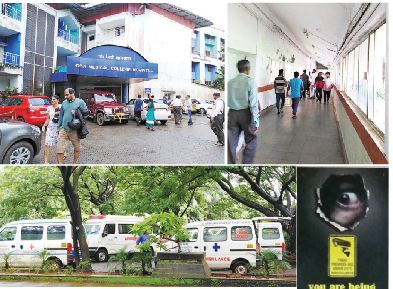 Glimpses of new GMC: Better lit, more discipline, less litter… Only patients may be dropped off or picked up at the entrance and no loitering around or a security guard will come up and solicitiously enquire your business of the day. One of the posters of Big Brother watching you!

Lots of good news at the new Goa Medical College & Hospital, and some bad and ugly, says Tara Narayan

TAKE A LOOK AT SODEXO MEALS…

THE Sodexo meals have arrived at the GMC, both in the general aam aadmi wards and paid-for rooms of Ward No.121. In Goa it’s hard to believe in so much efficiency but the service is amazing — Health Minister Vishwajit Rane signed the reportedly `16 crore contract for five years with the international French giant of Sodexo (whatever it means) to provide health-conscious meals at the GMC wards there has been a lot of talk of how good they are or how impractical! According to Sodexo-hired nutrititionist Jayanti Mondal (a young Bengali girl who did her MSC in Science Technology and Nutrition from Periyar University in Salem (Tamilnadu), “The food is cooked by Chefs Deepak, Gautam, Utpal, Jayanta in the GMC kitchen and they cook about 500 to 640 meals max each day for the patients…apart from the full normal diet meals we have diabetes normal diet, salt-restricted diet for kidney patients and so on.”
Most of their 50 or so strong “stewards” working in three shifts deliver the meals of early morning tea (with/without sugar), then breakfast, lunch, teatime and dinner. It is efficient, uniformed teamwork, with most of the young workers from Calcutta/West Bengal or Uttar Pradesh. If I seek more information she referred me to their Operations Manager in Goa, Debrata Ghosh (who is from Bangalore).
Breakfast may be an egg/protein drink, light one-egg white omlette, Indian favourites of upma or poha, tea. The lunch and dinner meals are satisfying in so much as there will be four thin chapatti, a portion of rice, a sabzi, a dal and a very generous helping of sliced/slivered salad with a light flavouring. Low in oil if at all and flavourful without being overly salty. Local vegetables like bottle and ribbed gourd are used and there may be a scattering of grated coconut — one sabzi I found extremely flavourful, high in fibre and delicious as a meal all on its own!
They try to be eco-friendly but the cardboard glasses are thin and may collapse if a patient does not pick them up delicately — a hot tea spill is possible! Take your tea in a double cup if you wish. All the wards get the same vegetarian meals, eggs/omlette are the only non-vegetarian protein source included. Smiled one of the team leaders to a query, “I would say most patients like the meals but may be 20% don’t!” Although by way of a Goan breakfast they also do Goan poie-tangy “tomato-onion gravy bhaji.” The portions are more than generous and both patient and attendant may share if desired with each preferring different things on the meal platter.
Sodexo first started its hospital operation at the Manipal Hospital and since then they’ve been so well accepted that they’re pretty much doing well in several places, be it at the GMC or some large corporate offices.