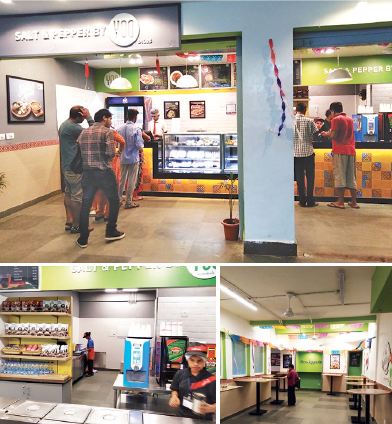 Sodexo cafeteria FOR ATTENDANTS AND VISITORS: Brightly lit, compact, decent meals along with a choice of junk food snacks… and standing arrangements only, no privileges for women or senior citizens who usually like to sit, eat in peaceful comfort rather than stand and fumble with their meals!

GUESS WHAT? Love me, hate me, but funny, funny, although nobody is laughing. Life has is moments. There was I playing at being loving attendant to a seriously affected dengue patient (my hubby actually) at the GMC’s private paying ward No.121 the whole of this gone week – and in between I was falling in love with the newly introduced Sodexo meals. Of course, these meals are meant only for the patient but I swear to it, this patient for various reasons real and unreal was rejecting the meals no matter how much I praised them.
Oh of course occasionally he would condescend to eat a large thin chapatti if the sabzi was bhindi, or the breakfast upma or poha; once he agreed to check out the specially made Goan poie with egg white omlette…but shunned the tomato-onion sabzi. So it happened that most times if the patient’s meals were going waste I would automatically share them or more or less finish them. Whatever the patient didn’t eat, I ate.
But then I was also taking a delighted interest in these fairly come-lately and so-called Sodexo meals which all GMC ward patients in general wards or paying wards are entitled to. They’re still talking about whether they like them or not.
As for me, hey, if I could get these GMC Sodexo meals in tiffin I’d order them every day for they suit me just fine, even if I’m usually concentrating on losing weight one way or another — in vain. The good bit is our hospitals even in Goa are finally increasingly becoming conscious of the importance of nutritional inputs in meals served to patients. It promotes better and faster recovery for sure. That is of course as long as patients are in eating, chewing, digesting condition; seniors with dentures may have a rough time. And fish-eating Goans are generally addicted to their xitt-kodi and variety of fried fish…and some patients got tired of the vegetarian meal deals and got their own food from outside or the family brought it for them. Goan grandmothers may insist you eat tizan!
However, what I am saying here is that the full patient’s Sodexo meal is deliciously flavourful without being loaded with salt, sugar or any fats — the hubby, of course didn’t much care for it — with egg white omlets, specially made wheat rich Goan poie bun with tomato-onion bhaji etc. Though for one time only he did stuff the light Sodexo omlet into a poie bun to eat, because there was nothing else to eat. I refused to go looking for food of another orientation outside the gates of the GMC!
So went my days at GMC the whole of last week, the hubby likes to call it his sasu-mai of course to annoy me. But this is not about him. This is about Sodexo meals, I wanted to but didn’t get around to walking down long, long corridors in search of the GMC kitchen quarters, but I hear they’ve come alive with more health-conscious meals cooked by professional chefs and supervised closely…you know the Sodexo story don’t you?
Sodexo is owned by Frenchman Pierre Bellon, keen businessman and billionaire… starting out in 1966, slowly making a name for itself for putting systems in place to offer quality of life. It’s said to be the No.1 Benefits & Rewards Company offering a range of services in 80 countries worldwide, has something like 460,000 employees. It’s best known for providing tasty nutritious meals to help patient recovery in hospitals and Sodexo India is present in some 46 centres with its meals. In Goa I think Manipal Hospital was the first hospital to contract with them.
Well, never mind the local politics but I don’t mind being a patient at the GMC just to enjoy these Sodexo meals! Attendants have to go down to the Sodexo cafeteria which is taking the place of the old locally run canteen — it’s a bright and smartly presented place and here a whole of local snacks like samosa, bread pakoda and batatvada are available, but one lunchtime I realized their also offer agreeable jeera rice-mixed vegetable curry for 50 or so. There was some interesting sounding French Butter & Pink Salt Popcorn here but didn’t feel like buying any, these days the health-concious are interested in pink rock salt! Most of the fryum snacks are priced11 and then loose change is hard to find…I really hate this kind of pricing though both here as well as the Wellness chemists opposite, most times one loses out on a rupee or they give you a candy you don’t want.
Quite a queue here breakfast time with GMC doctors cutting into the aam aadmi queue with their first rights privileges! Surely there should be a queue for women and senior citizens…and it’s uncomfortable standing at the one-legged round tables here at the Salt & Pepper Yoo Bites GMC cafeteria to eat (the company is Sodexo Food Solutions India Pvt Ltd, an Indian franchise presumably).
This time around I didn’t go out to the old GMC canteen to drink my favourite lemon grass black tea, it’s a shorter walk within the hospital complex but…I guess I was too impressed by the half-American-half French style of Sodexo service!
Needless to say most of the young Sodexo staffers are neatly turned out and friendly, mostly non-Goans. They’re a hardworking lot and put in impossible timings, the kind Goan youth would scorn at. Well, this is to say next time you’re at the GMC check out Sodexo cafeteria at lunch time.