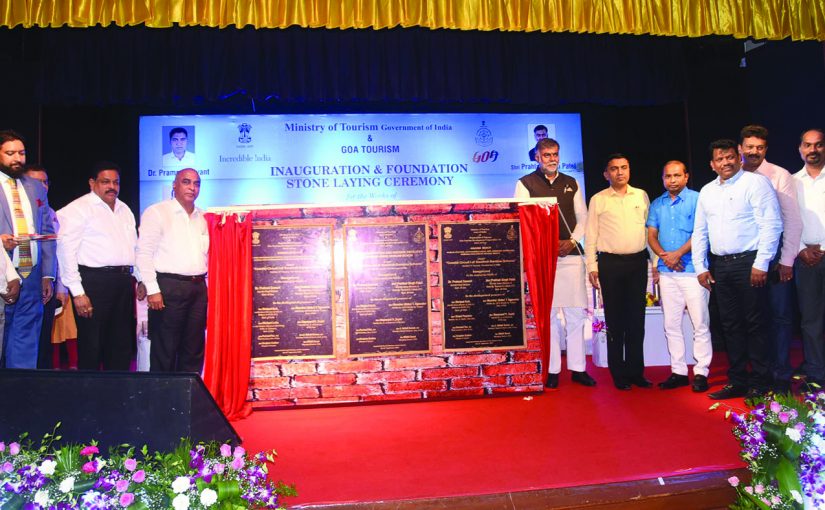 THE British Statesman and political thinker Edmund Burke said, “The greater the power, the more dangerous the abuse.” It is absolutely despicable that a very cash strapped, heavily debt-ridden Goa government, has the cheek to make a budget provision of a whopping `10 crore to build a Manohar Parrikar memorial on Miramar beach, the foundation of which is proposed to be laid on December 13.
Such rank abuse of power needs to be strongly opposed tooth and nail. Miramar beach is a public recreational space for people to enjoy freely without hindrance. It is fair enough that one samadhi of the charismatic first Chief Minister of Goa Dayanand Bandodkar, whose vision laid the strong foundation of Goa, is there. But let us keep what remains of Miramar beach free and not pour concrete here.
Panaji’s premier beach comes under the purview of Tourism Department and any use of it must be properly, legally authorized. Environmentally it is classified as a ‘no development zone’. Pramod Sawant’s government must refrain from setting a wrong precedent by building another memorial here. What about the other departed chief ministers, past and future? In future all chief ministers may choose to be cremated or buried at Miramar beach. The beach will cease to be a public beach.
Manohar Parrikar departed leaving the State exchequer burdened with his multicrore medical bill. He left Goa in an utter mess with every public issue unresolved from mining to Madhei to casinos, corruption, he proscrastinated all the way for fear of losing his kodel. Can we at least resolve now not to squander any more public funds on memorials and statues? God save Goa!
— Aires Rodrigues, Ribandar

CASINO FRAUDSTERS
POLICE arrested Vice President Goldman Sachs-India for a 38 crore fraud on the company. The VP claimed he wanted to pay off online poker debts accumulated by him! He also defaulted on prior personal loans from banks which later refused further loans. Is this an isolated case? Being a high-profile case it has reached the media: How many low profile cases are there? In 2012, Scott Stephens, a former COO of an American investment company, finally took the suicide route to end debt. Reports show three to four million Americans are pathological gamblers. There was the case of “The Mad Indian Gambler” Bhavani who murdered an escort to pay off gambling debts. Neuroscientists have discovered certain characteristics unique to gambling addicts. In these people, quote, “the brain frontal parts of the brain that says,Hey, stop!’ are less active, and parts that anticipate rewards are more stronger.” It took years before it became mandatory for cigarette packets to carry the “Injurious to Health” images. Should not online gambling and Goa’s own casino business be made to do something similar? People prone to addiction should be certified “not fit to gamble”?
Today locals are not allowed to gamble on casinos but can this be implemented and what about tomorrow. The present government is coming up with schemes implemented solely because of certain powerful people. Also should not the GMC’s Psychiatry Department in conjunction with Education Department make such news relevant to school studies? After all the Education Department regularly forces students to sit through Prime Minister’s address. Is the issue of gambling not more relevant?
The world over wherever there is gambling you will find cases of gamblers embezzling from their workplace to pay off debts. But we are still in a state of inertia in Goa waiting for fires to start first! That casino owners have close links with BJP politicians is well known but to what extent is the present government going to bend? It is the people who elect the government yet we are afraid to make it do what we want. Everyone has a price: But this is a bottomless pit!
— R Fernandes, Margao

BIANCA IMPRESSES
A new star is born — Bianca Andreescu from Canada. The US Open has a new champion and she did it with consummate ease, beating her more illustrious rival and 23-time Grand Slam winner Serena Williams in emphatic fashion, 6-3, 7-5. Tennis has got its latest darling in 19-year-old Bianca, who may be the heir apparent to the tennis world with her superlative performance that lit up the tennis world in glorious bright light. From being ranked about 150th just a year ago, Bianca has skyrocketed to the pinnacle of tennis’ heady heights with her hard work.
— Elvidio Miranda, Panaji

HIKE WON’T SAVE LIVES
I personally feel that this latest hike in traffic fines will only help some cops make some quick bucks by extorting the hard-earned salaries of all the helmetless two-wheeler users (middle-class poor people who struggle to run small families with low salaries). It will have absolutely no real impact on habitual traffic offenders (mostly rich irresponsible individuals who drive mindlessly/recklessly to impress others, those driving under the consumption of alcohol, and who love using mobile phones whilst driving etc).
If Union Minister Gadkari wants to genuinely save precious human lives then instead of unnecessarily targeting the hard-earned money of the common man, he should tell his government to ban liquor, and should also force all vehicle manufacturing companies henceforth to come out with not above 40 speed vehicles (both two-wheelers as well as four-wheelers) in India. Until this does not happen and the government does not provide the citizens with descent public transport services, plus clear our congested roads from two-wheeler riders, the end result will always be a big zero in an unorganised country like India. Over to Nitin Gadkari….
— Jerry Fernandes, Saligao