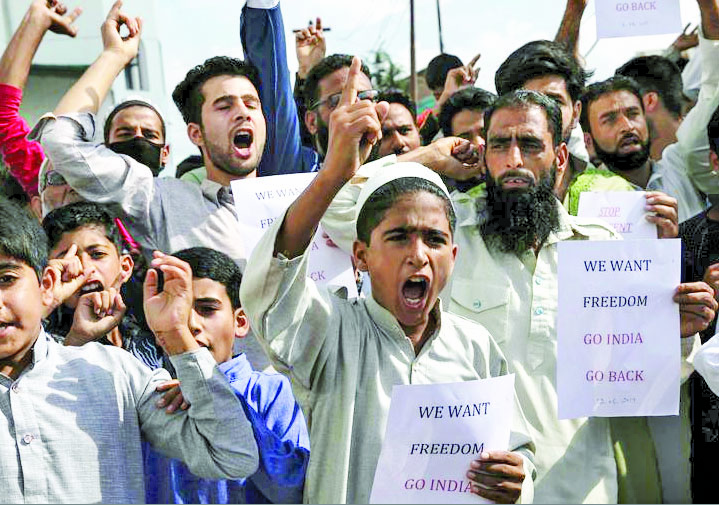 FIGHTING FOR SURVIVAL: Many children from J &K have been detained in refugee camps on the claim that their parents were not citizens of J&K. In pic, a protest in Srinagar, on August 12, 2019 (Photo: Reuters/Danish Siddiqui)

A writ petition has been filed in the Supreme Court against the illegal detention of children from J&K and UP. There have been thousands of cases of arrest including that of top political leaders

A writ petition has been filed in the Supreme Court seeking release of children being detained illegally in Kashmir ever since special provisions of Article 370 were read down and the state was bifurcated into two Union Territories.
The writ petition has been filed by Enakshi Ganguly and Shanta Sinha under Article 32 of the Constitution, which provides the right to constitutional remedies. Ganguly is an eminent child rights expert and Sinha was the first chairperson of the National Commission for Child Rights (NCPCR).
The petition refers to media reports on the matter and has requested the Court to ask for a status report and direct the Juvenile Justice Committee of the high court of Jammu and Kashmir to monitor incidents of detention.
The petitioners submitted that reports of potential loss of life and liberty of children and those of them being emotionally and intellectually drawn into the conflict were serious enough to merit judicial review. It cited reports of violence and abuse against children published in several national and international publications to make the case that Jammu and Kashmir is going through an “extraordinary situation”.
It asked the apex court to ensure that no excesses take place against women and children who are the most vulnerable in “such tense situations”.
The petition says that even when teenage boys are picked up over suspicion of being ‘potential’ stone-pelters, the detentions be reported and monitored by a body like the J&K high court’s Juvenile Justice Committee.
It also mentions a 2011 Delhi high court case heard by AK Sikri, then acting Chief Justice of the high court, in which the court took suo motu cognisance of reports that suggested that several times when children had been arrested by Delhi police, they were lodged at Tihar jail, out of ‘sheer negligence’, ‘act of omissions’ or sometimes ‘deliberately’.
The court had directed the NCPCR “to form teams to regularly visit jails and conduct age-based surveys of prisoners lodged therein to ensure that no minor is kept in incarceration in the jail”. The latest petition has prayed for similar action to be mandated in Kashmir under the supervision of the existing Juvenile Justice Committee.
Citing evocative excerpts from media reports relating to instances of maiming and injuries caused to children, the petition termed the current situation in Kashmir “urgent and disturbing”. It submitted that “the state is acting in violation of both specific laws with respect to children and also of constitutional principles and international child rights commitments”.
Arguing that after the passing of the Jammu and Kashmir Reorganisation Act, 2019, the immediate safety and protection of Kashmiri children becomes the Union government’s responsibility, the petitioners asked the court to direct the government to submit a status report on “actual detentions, injuries and deaths of children between August 5, 2019 to the present day”.
Stating that serious allegations of detentions and excesses of children, though unverified at this stage, are “not being made in a vacuum” the petition has listed past documentation by UN bodies to establish precedence. “The Report of the Office of the United Nations High Commissioner on Human Rights published on June 14, 2018 records the fact of arbitrary detention of children in Kashmir and also of maiming and injuring,” it says.
The petitioners add that the United Nations Working Group on Arbitrary Detention (2008) also took note of arbitrary detentions of children in Kashmir and that children in the Valley have been regularly detained under the Public Safety Act (PSA).
Stressing on the urgency of immediate corrective action for the mental well-being of children, the petitioners said, “It is relevant to note that such extraordinary situations have a deep and everlasting impact on the psychological well-being of children and by ignoring the urgency of the situation we may ‘lose’ a generation of citizens to state excesses.”
The petition has also cited results from a survey assessing the mental health of a thousand children from 12 schools in Shopian district that indicated that one out of every three of these children had a clinically diagnosable mental disorder. It says that even though the survey was conducted before August 5, the situation is likely to have worsened.
Establishing the locus standi of the petitioners, the plea noted that they are both “very experienced individuals and child rights experts, who are familiar with patterns of violence upon children that emerge in extraordinary situations”.
The petition also asked that the whereabouts of the detained kids be made known to their parents or guardians.
It also asked for an enquiry to be conducted by a court appointed investigation team into the specific cases of children who have been maimed or illegally detained, or who have died. It has asked for direct compensation be paid to such children and to the families of those who have died.