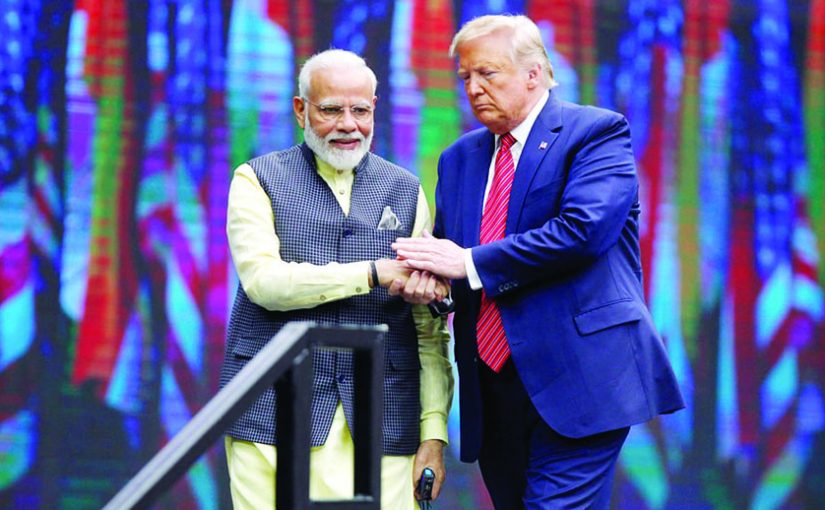 INTERNATIONAL SUPPPORT: Modi and Trump played to the gallery at the ‘Howdy Modi!’ event in Houston amidst the frenetic, adrenaline-charged frenzy of almost 50,000 NRI Modi supporters on American soil

Indian Prime Minister Narendra Modi was honoured with a 2019 Goalkeepers award from the Bill and Melinda Gates Foundation on September 24, 2019, for his program to end open defecation across India. Gloria Steinem and Akeel Bilgrami say the prime minister of India’s appalling record should be deplored, not celebrated with an award…

It is one thing for a political leader to come to power in his country by exploiting the darkest nationalistic instincts of its electorate. It is quite another thing for such a man to be awarded an international prize and embraced as a statesman by the most powerful and influential country in the world. The former reflects a familiar and vexing paradox of democracy — its deliberate subversion from within. The latter is entirely gratuitous and speaks to the collapse of any sense of international political morality.
The Gates Foundation has announced it is bestowing a prestigious annual award on prime minister Narendra Modi of India. And in advance of the UN general assembly meeting in New York, Donald Trump flew down to Houston, Texas, to welcome him at an event charmingly dubbed the “Howdy Modi” rally.
Yet it was less than 15 years ago that Modi was denied a visa to the US, the only person in the world ever to have been banned under the International Religious Freedom Act. That’s because in 2002, when he was chief minister of Gujarat, Modi helped create the conditions for a three-day anti-Muslim riot that resulted in rape, murder and the burning of homes. It has been widely described as state terrorism and ethnic cleansing.
Now, as prime minister of India, Modi presides over a culture where acts of hate against Muslims occur daily across the nation, and also against Dalits, the lowest group in the Hindu caste system. There is a massive record of their humiliation, including repeated sexualised violence against women and young girls from those groups, and frequent lynchings of men, echoing a dark period in the history of the US. Not only are these barbarities rarely prosecuted, but those who attempt to intervene to stop them are often punished.
India has historically had a robust free press, but now Modi’s government harasses and closes down media that are critical of his regime. The same goes for unions, human rights law firms and academics.
His perverse demonetisation scheme has deprived the poor and middle class of savings, and in addition to selling off natural resources to global businesses, he is all set to privatise the railways and public transport on which average citizens depend.
Most recently, Modi has defied the Constitution of India by revoking the autonomy it afforded Jammu and Kashmir. Why? Because the incessant violence of its military occupation of that region, 70% of whose citizens are Muslim, is quite naturally being resisted by them. He has imposed severe restrictions on internet communication there, thus creating a virtual prison governed by well-armed members of the Indian army.
So, has the US government officially criticised this unblushing brutalisation of the people of India? On the contrary, under Trump it has pitched the sale of arms to India in order to compete with Russia. And Modi has been paraded as a feted guest in Houston and New York.
In the light of this record of wrongdoing, the Gates Foundation’s award to Modi for starting a sanitation scheme in India seems rather like giving a prize to Mussolini for making the trains run on time.
The scheme, in any case, does little to provide sanitation for the most impoverished segments of the population who need it most, and it does nothing to undermine, let alone address, the fact that the most degrading forms of sanitation labour have for centuries been assigned to the lowest rungs in the caste hierarchy.
But such details aside, it is bizarre that a prize intended for those who uplift the poorest has gone to the seediest tormentor of the poorest and most marginalised people of India.
We write this opinion piece as citizens of these two biggest and most diverse democracies in the world, the US and India, who have spent years living and working in each other’s countries.
Governance, in the honourable traditions of liberty and democracy of both our nations, was never intended to begin with: “I, the president” or “I, the prime minister”, as is now increasingly the case. It begins, rather, with: “We, the people”.
So, we ourselves can declare our support for the International Religious Freedom Act and explicitly recoil from both Prime Minister Modi and President Trump’s anti-Muslim bias. And we can oppose their shared glorification of an unequal past by vowing to make India and the US live up to their democratic promise.

(Gloria Steinem is a writer, lecturer, editor, and feminist activist. Akeel Bilgrami is a philosopher of language and mind, and professor of philosophy at Columbia University)

Hours before Prime Minister Narendra Modi officially received the Gates Foundation’s annual Global Goalkeeper Award for his Swachh Bharat Mission, a staff member at the foundation reportedly resigned in protest.
Sabah Hamid, a 42-year-old communications specialist, told TRT World that honouring Modi while he imposed a communications and movement lockdown in Kashmir was a grave error. “Since the foundation seemed set on its course of action to go ahead with the award — which as a private foundation it is entitled to — I could do just one thing: leave,” Hamid said.
Hamid, a Kashmiri, has been with the Gates Foundation for the last 3.5 years. “Being Kashmiri makes it personal. Eight million of my people have been under an undeclared curfew for 50 days now, with minimal access even to medical care, and there is a humanitarian crisis under way in the valley. The Modi led government has not only designed and implemented this crisis, their untruths and the complicity of a large part of the media means they are also trying to hijack the narrative. Being feted at large international gatherings, and winning awards plays right into that,” she said.
There has been widespread global outrage over the Gates Foundation’s decision. From three Nobel laureates — Iranian activist Shirin Ebadi, Northern Irish peace activist Mairead Maguire and Yemini journalist Tawakkol Abdel-Salam Karman — to a civil society group that partners Goalkeepers Youth Action Accelerator, several groups had penned open letters asking the Gates to reconsider.
Gates Cambridge scholars and alumni also said that the decision to reward Modi “while ignoring the gross violation of human rights under his regime is reprehensible”. An online petition seeking a revocation of the award has more than 100,000 signatures.
Two celebrities who were supposed to be present at the ceremony – British Asian actors Jameela Jamil and Riz Ahmed – pulled out of the ceremony after the Indian government’s actions in Kashmir, but have not publicly said if that was the reason for them doing so.