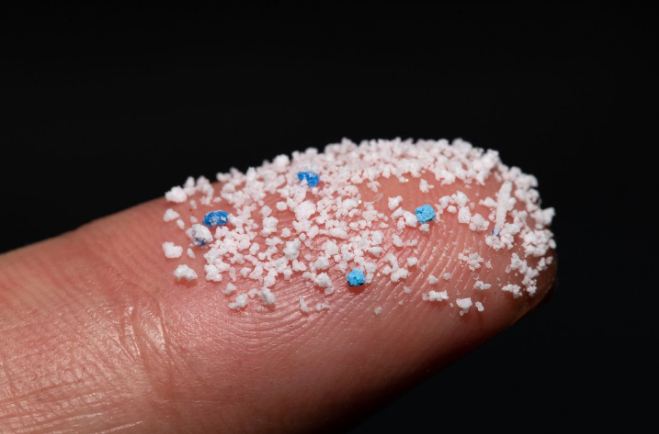 MICROPLASTICS: Not formalin but plastic is the biggest agent contaminating fish and other edible items. All the waste that fish, fowl, bull and goat eat, runs the risk of becoming part of your diet. Microplastics are plastic pieces that are less than five millimeters long that pollute drinking water, oceans, lakes, ponds, etc. Typically made from polypropylene, polyethylene, terephthalate, or nylon-microplastics are most commonly found in health and beauty products. However, they can be introduced to the environment from a variety of other sources. For instance, larger plastics that break down, synthetic clothes releasing microfibers while being washed, resin pellets that are used for plastic manufacturing, microbeads (polyethylene beads found in soaps and toothpastes), sewage dumping, etc

Minister for Waste Management Michael Lobo in an exclusive interview with Goan Observer explains how widespread plastic contamination is. It is not formalin that is the biggest risk to health. Plastics are a much bigger risk as it is everywhere around us in sachets, pet bottles, paper plates, cutlery and even plastic storage containers. The minister has sought the co-operation of all citizens to keep Goa green and clean in this special supplement on waste management…

Plastic is the greatest threat to pollution, insists Minister for Waste Management Michael Lobo. He says plastic has penetrated every part of our life in the worst way. The plastic that we and tourists carelessly throw into rivers or the sea is broken down and consumed by fish or other animals. Whether we want to eat a fish curry-rice or a rare steak, we knowingly or unknowingly run the risk of eating plastic along with it!
In a recent study conducted by Gabrial D’Cruz, marine environmentalist, she was shocked to filed micro-plastics in the rain water in Meghalaya. Analysis of rain water in Goa is sure to show the same.
Lobo says, “Even the biggest animals in the world like the elephant, rhinoceros and dinosaur, if it was still here, would sooner than later disintegrate as they are biodegradable. This is not the case of plastic. Plastic carry bags, plastic plates, and even your plastic straws, will take hundreds and thousands of years to get fully degraded. In the meanwhile they cause enormous harm to the environment. This is because unlike food articles and biodegradable products, plastics can last forever as micro-plastics.”
Speaking about the recent flooding in Goa, Lobo acknowledged the extra heavy rains this time made the situation worse and the garbage management was badly affected, but pointed out that plastics also made a major contribution to the choking of the waterways and the flooding of roads to the extent that water entered shops, made normal life and commerce difficult, and even resulted in an epidemic of dengue as a bonus.
He spoke about the good old days when plastic was never used. People used cloth or paper bags to buy our groceries and stainless steel plates for our lunch and dinner. They stored water not in pet bottles but in matka. It is only over a period of time that it has dawned on us that plastic can be so dangerous to the environment and now we have to try and minimise and even undo the damage of the past few years.

Contrary to the claims of the multi-crore plastics industry, there are very few plastics which are recycled. The plastic pollution problem has worsened with the spread of single-use plastics. Single-use plastics are items like small or big pet bottles and the mini-cutlery and containers that fast food joints supply. The biggest concern in plastics items, according to Michael Lobo, are sachets of cosmetics, pan masala, straws, pet-bottles and other single-use plastics. Though theoretically gutka is banned you will find them at every garden and restaurant.
Multi-nationals, in their desire to expand their markets, have started making sachets of their products so that they can attract the poor and the lower middle class. Examples are the `10 sachets of surf or shampoos, which account for over 70% of the production of the multi-national cosmetic companies.
Similarly, when you are buying your children ice-cream or soft drinks you may not be aware that you are contributing to plastic pollution. Up to a decade or even ten years ago most manufacturers of jam, marmalade, butter and oil, supplied their products in glass bottles. In a cost-cutting exercise, increasingly all manufacturers of edible oils have switched to plastic bottles.

The worst part of plastic bottles, as Lobo clarifies, is that the thinner the bottle, the more difficult it is to recycle it. Moreover, the risk of drains and gutters getting choked is much higher with lower grade thin plastics. If the fish off the coast is full of plastic residues it is because we are irresponsible and throw plastic items into the sea.
He says, “My biggest challenge as minister for waste management is dealing with solid waste, which includes metals, electronic waste and plastics. In the case of food items it is possible to convert them into compost which in turn can be used as manure. Certain types of plastic can be used in road construction. But the majority of solid waste ends up as literally mountains of garbage — as we have seen in Sonsodo in Margao — which is why the first principle in waste management is segregation.”
Michael Lobo congratulated the Panjim Municipality for being the first civic body to arrange for day-to-day collection of both solid and wet waste segregated at source.

One of the main reasons of the collapse of Sonsodo in Margao was the inability of the Municipality to segregate waste. Feeding of mixed waste into the waste management plant ruined the Sonsodo plant.
Lobo agrees that the Saligao plant is currently functioning very well. But as in the case of Curca there is a risk of its collapsing due to over load. Which is bound to happen when all the villages in Bardez send their waste to Saligao. He says our goal should be to have a separate waste management unit for every village.
Before Liberation Goa had virtually no waste management problems. In the rural areas the pig-type toilets system was the perfect solution for recycling waste. Unfortunately it is not possible to continue with such practices because of other health hazards. We have to have a bio-digestive and composting pit in every village.
The minister feels that all citizens should take responsibility for the waste management problem. Hotels and gated colonies should be compelled to set up their own treatment plants.

Speaking of the single-use plastics ban Lobo says, “We had first decided to ban all single-use waste plastics from Gandhi Jayanti, October 2, 2019. The Union Ministry had also decided to impose heavy fines on all institutions and civic bodies which violated the rules. We decided to postpone it because Prime Minister Narendra Modi felt that awareness should be created first. You can use force, but it’s more effective to convince people of the effect of waste, particularly plastic, on the environment.”
We have inherited a legacy of clean, green Goa from our parents and grandparents. We have an obligation to maintain clean, green Goa and ensure that not just tourists but locals are able to live in a healthy environment. We must all follow the maxim of Mahatma Gandhi who insisted that cleanliness was next to godliness.