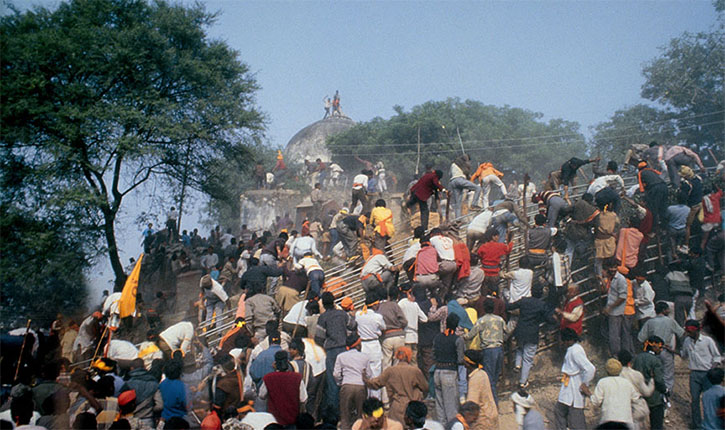 SACRILEGE: About a decade ago Sangh Parivar fanatics calling themselves kar sevaks led by former Home Minister LK Advani demolished the Babri Masjid with the tacit collusion of the UP Chief Minister Kalyan Singh and then Prime Minister P V Narsimha Rao

The unanimous judgment on the Ayodyha dispute by a five-judge Constitution Bench brought down the curtains on a dispute that began in 1885.

Q. Why key challenge before court was two quests for truth?
The lands of our country have witnessed invasions and dissensions. Yet they have assimilated into the idea of India everyone who sought their providence, whether they came as merchants, travellers or as conquerors. The history and culture of this country have been home to quests for truth, through the material, the political, and the spiritual. This Court is called upon to fulfil its adjudicatory function where it is claimed that two quests for the truth impinge on the freedoms of the other or violate the rule of law…
This Court is tasked with the resolution of a dispute whose origins are as old as the idea of India itself… Though the significance of the site for the Hindus is not denied, it is the case of the Muslims that there exists no proprietary claim of the Hindus over the disputed property.

Q. How reliable are the accounts of travellers?
The accounts of the travellers must be read with circumspection. Their personal observations must carefully be sifted from hearsay — matters of legend and lore. Consulting their accounts on matters of public history is distinct from evidence on a matter of title. An adjudication of title has to be deduced on the basis of evidence sustainable in a court of law, which has withstood the searching scrutiny of cross-examination. Similarly, the contents of gazetteers can at best provide corroborative material to evidence which emerges from the record. The court must be circumspect in drawing negative inferences from what a traveller may not have seen or observed. Title cannot be established on the basis of faith and belief above. Faith and belief are indicators towards patterns of worship at the site on the basis of which claims of possession are asserted. The court has evaluated the rival claims to possessory title in a situation in which the state has expressly stated in its written statement that it claims no interest in the land.

Q. What is the significance of the ASI findings?
(i) Archaeological finds in the area of excavation reveal significant traces of successive civilisations, commencing with the age of the North Black Polished Ware traceable to the second century B.C.;
(ii) The excavation by the ASI has revealed the existence of a pre-existing underlying structure dating back to the twelfth century. The structure has large dimensions, evident from the fact that there were 85 pillar bases comprised in 17 rows each of five pillar bases;
(iii) On a preponderance of probabilities, the archaeological findings on the nature of the underlying structure indicate it to be of Hindu religious origin, dating to twelfth century A.D.;
(iv) the mosque in dispute was constructed up on the foundation of the pre-existing structure. The construction of the mosque has taken place in such a manner as to obviate an independent foundation by utilising the walls of the pre-existing structure….

Q. Does an ancient Hindu temple exist beneath Babri Masjid?

Q. What is legal character of deity Ram Lalla vs Janmasthan?
The recognition of the Hindu idol as a legal or juristic person is… based on two premises employed by courts. The first is to recognise the pious purpose of the testator as a legal entity capable of holding property in an ideal sense absent the creation of a trust. The second is the merging of the pious purpose itself and the idol which embodies the pious purpose to ensure the fulfilment of the pious purpose. So conceived, the Hindu idol is a legal person. The property endowed to the pious purpose is owned by the idol as a legal person in an ideal sense. The reason why the court created such legal fictions was to provide a comprehensible legal framework to protect the properties dedicated to the pious purpose from external threats as well as internal maladministration.
… the recognition of Asthan Sri Ram Janam Bhumi as a juristic person would result in the extinguishment of all competing proprietary claims to the land in question. This conferral of absolute title (resulting from the conferral of legal personality on land) would in truth render the very concept of title meaningless. Moreover, the extinguishing of competing claims would arise not by virtue of settled legal principles, but purely on the basis of the faith and belief of the devotees. This cannot be countenanced in law. The conferral of legal personality by courts is an innovation arising out of necessity and convenience.
… The conferral of legal personality on Hindu idols arose due to the fundamental question of who the property was dedicated to and in whom the dedicated land vested. In the present case, there exists no act of dedication and therefore the question of whom the property was dedicated to does not arise and consequently the need to recognise the pious purpose behind the dedication itself as a legal person also does not arise.

Q. Who had possession of the disputed 2.77 acres?
The evidence indicates that despite the existence of a mosque at the site, Hindu worship at the place believed to be the birth-place of Lord Ram was not restricted. The existence of an Islamic structure at a place considered sacrosanct by the Hindus did not stop them from continuing their worship at the disputed site and within the precincts of the structure prior to the incidents of 1856-7. The physical structure of an Islamic mosque did not shake the faith and belief of Hindus that Lord Ram was born at the disputed site. On the other hand, learned counsel fairly stated that the evidence relied on by the Sunni Central Waqf Board to establish the offering of namaz by the Muslim residents commences from around 1856-7…
Essentially, the setting up of Ramchabutra within a hundred feet or thereabouts of the inner dome must be seen in the historical context as an expression or assertion of the Hindu right to worship at the birth-place of Lord Ram. Even after the construction of the dividing wall by the British, the Hindus continued to assert their right to pray below the central dome.
Muslims have no proof to show ‘exclusive’ possession of the disputed structure.
…there is no evidence to the contrary by the Muslims to indicate that their possession of the disputed structure of the mosque was exclusive and that the offering of namaz was exclusionary of the Hindus…
Testimonies of both Hindu and Muslim witnesses indicate that on religious occasions and festivals such as Ram Navami, Sawan Jhoola, Kartik Poornima, Parikrama Mela and Ram Vivah, large congregations of Hindu devotees visited the disputed premises for darshan…
There can (be) no denying the existence of the structure of the mosque since its construction in the sixteenth century with the inscription of Allah on the structure. The genesis of the communal incident of 1856-7 lies in the contestation between the two communities over worship. The setting up of the railing in 1856 was an attempt by the administration to provide a measure of bifurcation to observe religious worship — namaz by the Muslims inside the railing within the domed structure of the mosque and worship by the Hindus outside the railing.

Q. How placing idols under dome, demolition deprived Muslims?
The events preceding 22/23 December 1949 indicate the build-up of a large presence of Bairagis in the outer courtyard and the expression of his apprehension by the Superintendent of Police that the Hindus would seek forcible entry into the precincts of the mosque to install idols. In spite of written intimations to him, the Deputy Commissioner and District Magistrate (K K Nayyar) paid no heed and rejected the apprehension of the Superintendent of Police to the safety of the mosque as baseless. The apprehension was borne out by the incident which took place on the night between 22/23 December 1949, when a group of fifty to sixty persons installed idols on the pulpit of the mosque below the central dome. This led to the desecration of the mosque and the ouster of the Muslims otherwise than by the due process of law. The inner courtyard was thereafter attached in proceedings under Section 145 CrPC 1898 on 29 December 1949 and the receiver took possession…
On 6 December 1992, the structure of the mosque was brought down and the mosque was destroyed. The destruction of the mosque took place in breach of the order of status quo and an assurance given to this Court. The destruction of the mosque and the obliteration of the Islamic structure was an egregious violation of the rule of law.

Q. Why HC ‘completely erred’ in grant of its relief?
The High Court has adopted a path which was not open to it in terms of the principles formulated above. It granted reliefs which were not the subject matter of the prayers in the suits. In the process of doing so, it proceeded to assume the jurisdiction of a civil court in a suit for partition, which the suits before it were not…
In assessing the correctness of the decree of the High Court, it must be noted at the outset that the High Court was not seized of a suit for partition. In a suit for partition, it is trite law that every party is both a plaintiff and defendant…
The High Court was called upon to decide the question of title particularly in the declaratory suits. The High Court has completely erred in granting relief which lay outside the ambit of the pleadings and the cases set up by the plaintiffs…
We have already concluded that the three-way bifurcation by the High Court was legally unsustainable. Even as a matter of maintaining public peace and tranquillity, the solution which commended itself to the High Court is not feasible. The disputed site measures all of 1500 square yards. Dividing the land will not subserve the interest of either of the parties or secure a lasting sense of peace and tranquillity…

Q. Why it was necessary to give Muslims alternative land?
The allotment of land to the Muslims is necessary because though on a balance of probabilities, the evidence in respect of the possessory claim of the Hindus to the composite whole of the disputed property stands on a better footing than the evidence adduced by the Muslims, the Muslims were dispossessed upon the desecration of the mosque on 22/23 December 1949 which was ultimately destroyed on 6 December 1992…
There was no abandonment of the mosque by the Muslims. This Court in the exercise of its powers under Article 142 of the Constitution must ensure that a wrong committed must be remedied. Justice would not prevail if the Court were to overlook the entitlement of the Muslims who have been deprived of the structure of the mosque through means which should not have been employed in a secular nation committed to the rule of law. The Constitution postulates the equality of all faiths. Tolerance and mutual co-existence nourish the secular commitment of our nation and its people.