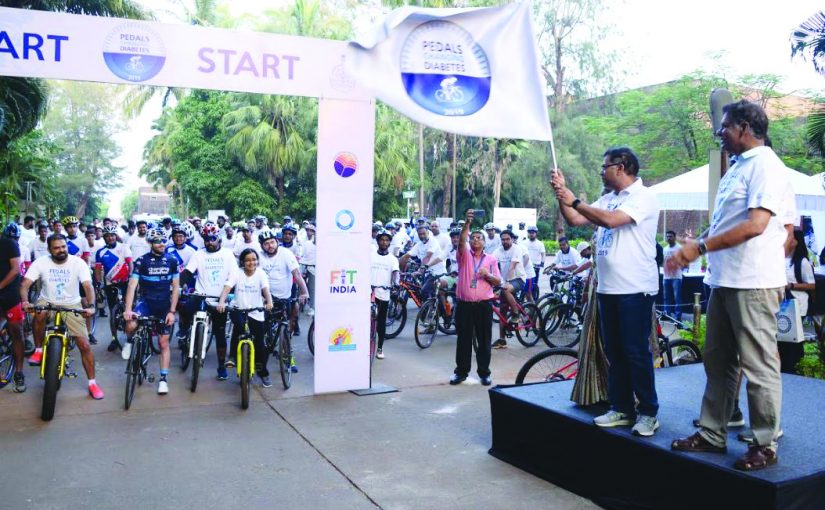 CYCLE FOR HEALTH! Health Minister Vishwajit Rane flagging off ‘Pedal’s Changing Diabetes’ — a Cyclathon (cycle rally) — on World Diabetes Day at Kala Academy early on November 15, 2019, as excited participants brace themselves. Organised by the Directorate of Health Services, Goa & Novo Nordisk Education Foundation, the 10 km cyclathon started at Kala Academy, then had participants cycle through Campal and Miramar to the Caranzalem Children’s Park, before heading back to Kala Academy

Vodafone about to exit India, BSNL+MTNL being stripped of manpower (with 60,000 people likely to take VRS out of 1,40,000), Airtel expresses doubt about itself remaining a going concern. Telecom NPA’s of Vodafone+Idea to be about 1,00,000 Crores. Total Telecom NPA’s to be in the region of 8,00,000 Crores.
This is what one man’s support to the evil plans of another man has done to the telecom industry.
Government policies were twisted and turned just to benefit one person’s ambition to become a monopoly in the telecom sector.
Every government institution that could have prevented the creation of this monopoly has kept quiet and allowed this systematic loot and organized plunder to take place.
Recently Government of India privatized one train on the Lucknow-Delhi Route. The fares went through the roof. The result is that the train now runs with 35% occupancy and is likely to post losses to the private enterprise that runs it. But it is simple for private enterprises, when things run into a loss, they simply walk away.
Like Anil Dhirubhai Ambani’s Reliance Infrastructure walked away from the Airport Express line. Not only did it walk away, the then AG Mukul Rohatgi recommended to the Government of India that it should pay full compensation to the company for walking away. Then the AG quit his post and has since become the BJP’s main trouble shooter in all cases filed by it against anyone in India.
Mukul Rohatgi was also the lawyer who argued on behalf of Government of Maharashtra in the PIL seeking probe into Judge Loya’s death and sought to prevent such an investigation. He was paid 11,00,000 per appearance and a total of 1,21,00,000 (One Crore Twenty One Lacs) for a total of 11 appearances as per RTI.
And what will the government do with the 8,00,000 Crore NPA of the telecom sector?
It will take money from the common pool and give it to the banks.
Toh phir mitroon, vikas kya ghanta hoga?
— Vladimir Furtado, Goa

100% POTHOLES
It was so very enlightening meeting with Goa’s new Governor Satya Pal Malik at the Raj Bhavan. In our 30 minute frank and extremely very cordial interaction, I found our Governor to be very modest, practical and someone who believes in delivering good governance to the poorest of the poor. A gregarious personality with a robust heart. He is indeed a good listener with a very clear mind and believes in achieving results. The very knowledgeable and well experienced Governor Malik seems to be a person with a mind of his own and may not sign at the dotted line.
Governor Malik who has remained a socialist throughout recounted his role in the student movement and his association with Dr Ram Manohar Lohia and must be now pleased that he is today Governor of a State where Dr Lohia had ignited the freedom movement. I have assured Governor Malik that I would periodically be informing him on the problems facing our State while suggesting concrete solutions too.
Have also impressed on him the need to curtail unnecessary state expenditure and streamline the administration while stressing the need of tackling the garbage crisis on a war footing and attending to Goa’s potholed roads on a priority. I also requested to our Governor to try and visit the villages across Goa so that he could see for himself the hardship faced by the local people.
I did not broach up the contentious issue of restoring the RTI Act at our Raj Bhavan and have saved it for another day. I am confident that Governor Malik with his very broad outlook will not let Goa down and would do justice to the State. Let us only hope that Goa’s Ministers and MLA’s inculcate the values and principles of Governor Satya Pal Malik
— Aires Rodrigues, Ribandar

PUBLIC HEALTHCARE REALITY
I CAME down with dengue last Thursday, Nov 7, 2019. By 2.30 am my temperature was at 103.1 deg. In that condition, I rode on my scooter to GMC since it is closest to my house. Upon my arrival I was turned away by a nurse who said they can’t admit me since I don’t have an attendant.
Isn’t it a doctor’s oath and/or health professional’s duty to cater to every patient, whether they have an attendant or not? Am I supposed to die at someone’s whim and fancy? What choice was I left with? I rode ahead to Manipal Hospital where they admitted me at 3.30am and charged me a whopping Rs 11,000 for nine hours of time I spend in a general ward. Yes, that’s right. General Ward. Is it my fault that I live by myself? Or should I have broken protocol to call people I knew at such an ungodly hour?
A lot of fingers will wag at me for sharing this but I would really like GMC to become a genuinely good public hospital and step up its manners and become the best, instead of getting paid promotion done for itself through Prudent Media, desperately trying to cover up stupid lacunae. Lastly, I agree that Delhi Mohalla clinics are far better and well equipped than GMC!
— Devsurabhee Yaduvanshi, Goa (courtesy Facebook post)

CORRECTION
It was nice meeting with your correspondent in Goa when I participated in the Ironman 70.3. I read the article (GO, November 9, 2019). Thank you so much for quoting me, it means a lot!
One big correction: The article says I finished to the podium in 4.5 hours. Actually I finished in 7 hrs (eight and half hours was the cut off). I did not make it to the podium but I hope I do one day. Thank you once again.
— Rahul Zetshi, India