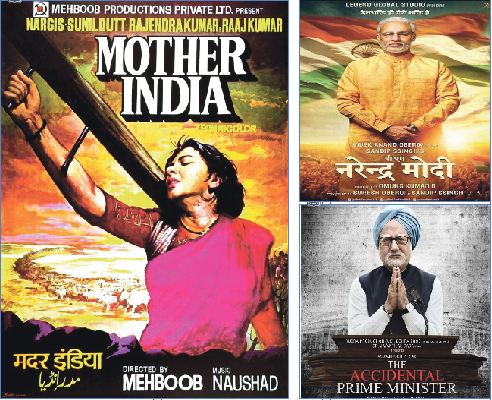 PIONEERS: There have been many political films in the past which questioned the ethics of the rulers — prominent of which were Jis Desh Mein Ganga Behti Hai, Mother India and Manthan. Compare the delicacy and genuine patriotism in the past to the naked political motives of recent cinema

Biopics are the new fashion. While most biopics in the country feature sports persons, politicians have also discovered the effectiveness of cinema and television. Among the sports superstars on whom biopics have been made are cricket star MS Dhoni and Olympic medal winning boxer Mary Kom. A film on badminton superstar Saina Nehwal is under production. ‘URI’ was an biopic on former defense minister the late Manohar Parrikar and celebrated his surgical strike. The most outstanding political film has been the Oscar-winning epic on Mahatma Gandhi by British filmmaker Richard Attenborough

At a time when everyone is flexing muscles to strengthen ‘bonds of democracy’ (pun intended), I am intrigued by the sudden spate of cinematic creations that seem less art and more ‘cinema of politics’. While pliable media houses have long indulged in abuse rather than analysis of issues, film producers (read businessmen) too seem to have joined the bandwagon of obfuscating real topics of ‘roti, kapda, makaan and naukri’ to serve the political masters. Else, what explains the barrage of biographical films of political leaders and the sudden rise in movies that pedal ideologies aligned to ruling dispensation? Filmmakers may deny political motives but their manufacturing of larger than life images of political favourites does give rise to suspicion of hidden agendas to influence voters!
Unlike today’s unabashed ‘cinema of politics’, we have had political films in the past that seriously questioned socio-economic and political ethics of the nation. Films like ‘Jis Desh Mein Ganga Behti Hai’, ‘Mother India’, ‘Paigham’, ‘Boot Polish’, ‘Ganga Jamuna’, ‘Mujhe Jeene Do’, ‘Aakrosh’, ‘Manthan’ and ‘Mrigya’ were laced with stinging rebukes about India’s progress.
In fact, the soul stirring lyrics of Hindi films ridiculed the actions and achievements of political leadership on several occasions and who can ever forget Rafi Sahab’s immortal soliloquy “Jinhein Hind Par Naaz Hai Wo Kahaan Hain (Where are those that are proud of India)” from ‘Pyaasa’ or Saahir Ludhianvi’s other equally gut wrenching song “Chino-Arab Hamara, Hindustan Hamara, Rahne Ko Ghar Naheen Hai, Sara Jahan Hamara” (Though China, Arabia, India and the whole world is ours, Yet we have no place as home)” from ‘Phir Subah Hogi’ that satirised feeble eradication of social and economic ills.
Films like ‘Kissa Kursi Ka’ and ‘Aandhi’ too have been touted as political films but while the first was a pathetic execution of a brilliant idea, the second was just a benign look at the life of a married female politician. Though both films allegedly targeted Indira Gandhi, the fact is that while ‘Kissa Kursi Ka’ was certainly made by Amritlal Nahata at the instructions of Ms Gandhi’s detractors, Gulzar’s ‘Aandhi’ had nothing in common with Ms Gandhi except a white streak in Suchitra Sen’s hairdo!
However, the unleashing of the ‘cinema of politics’ just before the 2019 general elections pleads for serious introspection about the motives and objectives of these biopic films. The highly publicised exhibition of ‘An Accidental Prime Minister’, ‘Thackeray’, ‘NTR’ and now ‘PM Narendra Modi’ may be described as mere coincidences in an election year but the powerful support to these films by politicians raises concerns of a surreptitious intent.
Though there are no visible proofs of financial collaborations by politicians or political parties in these projects, yet the manner in which Bharatiya Janata Party (BJP) leaders have taken part in promotion of ‘An Accidental Prime Minister’ or ‘PM Narendra Modi’ does make you doubt their assertions.
It is pertinent to note that Vijay Gutte, the director of ‘An Accidental Prime Minister’, is the son of sugar baron Ratnakar Gutte, who had contested the 2014 Maharashtra Assembly elections as a BJP-alliance candidate!
Similarly, The Wire has reported that “there is a lot more to (film) PM Narendra Modi than meets the eye”.
Of course, films on lives of political personalities must be made but when some politicians are depicted as haloed figures while their opponents are caricatured as nincompoops, it clearly is not cinematic art but furtive misinformation at work.
The worst kept secret of the modern world is how the businessmen, bureaucrats and politicians use the mighty arms of the state to loot and exploit the public and no wonder,
American academic philosopher John Dewey had stated “politics is the shadow cast on society by big business”. That is why one needs to reflect on why Indian democracy has had such a surfeit of biopics on politicians in this election season?
Not just that, how come in the last one year or so, film screens have been inundated by a string of films like ‘Padman’, ‘Gold’, ‘Satyamev Jayte’, ‘Parmanu: The Story of ‘Pokhran’ and ‘Uri: The Surgical Strike’ that package strident nationalism in a deft advertorial manner? Is it merely a twist of fate that shrill, innuendo-laced trailers of a film on the late Lal Bahadur Shastri appeared in a Goebbels-like manner in the media?
Millions of innocent citizens from US to Russia to India are unaware of how their voting decisions are deftly manipulated by corporate businesses but social analysts know how money, muscle and propaganda are now used in tilting political elections around the world.
It may not be wrong to assume that apart from bypassing the Election Code of Conduct as well as expenditure limits laid down by the Election Commission; ‘cinema of politics’ is a new tool in India for political canvassing because as Harry Truman so eloquently defined: “if you can’t convince them, confuse them”.
Like the electoral bonds, which have been stated as grave risk for democracy by the election commission, propaganda films too are prejudicial to public interest as they are heavily biased in favour of the government of the day. Remember, lies travel faster and surer than truth and the damage can never be undone!