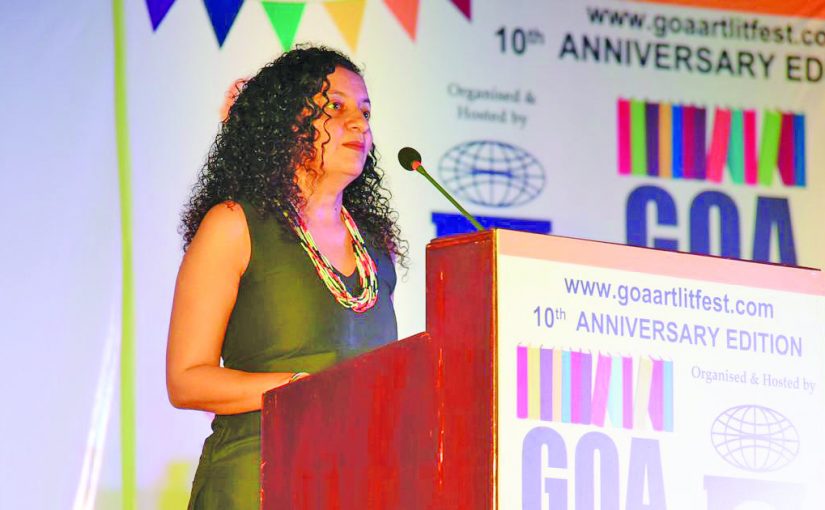 Journalist and columnist of #MeToo movement gave the keynote address at GALF 2019, urged women not be meek when it comes to sexual harassment but to speak up

In her keynote address at the Goa Lit Fest on December 5, 2010, Priya Ramani spoke of many things from the silence which enshrouded sexual harassment of women at the work place, to how after she broke her own silence about powerful editor, author and former Union Minister MJ Akbar propositioning her in a hotel room where she was called for a job interview for the ‘Asian Age’ (which he edited some 20 years ago)…an exposed and vengeful MJ Akbar has now filed a criminal defamation case against her to harass her legally.

THANK you for inviting me to speak at the best literary festival in India. The curators of the Goa Arts and Literature Festival are probably the only organisers of any such event who read all the books they feature. And here you invariably find stories from the margins – whether it’s the North East, Kashmir, or even Goa.
What does it mean to speak from the margins? The last time I spoke the truth on a public platform, a powerful man slapped a criminal defamation case against me. I wonder what will happen today.
Recently, three women were discussing the impact of #MeToo.
There are so many things I wish I had told my mother before she died, one said.
Like what, someone asked.
All the bad stuff that happened to me as a child, for example, she replied.
I still haven’t told my mother about my dad’s friend who abused me. He’s around and in touch with the family, the second said.
I will never tell my parents what happened to me, the third said emphatically. After all these years, I don’t want them to feel bad that they couldn’t keep me safe.
That’s true, the first said. Maybe it’s good I didn’t tell my mother anything. My mother would only have felt sad if I shared. And what would she have done about it anyway?
Think about it, this first woman suddenly said. Despite #MeToo, despite all the stories we’ve heard these past few years across the world, there is still so much women haven’t shared – even with each other.
There are so many stories we still keep hidden.
So when you look at the huge numbers around the #MeToo conversations on social media – a recent report by UN Women, for example, calculated that there had been 36 million tweets across 195 countries using 25hashtag variants of #MeToo from January 2016 to July 2019 – you must understand that these numbers don’t indicate that women are exaggerating what they’ve experienced what they’ve experienced. In fact, we are understating. We are just scratching the surface of the horrors of sexual violence and sexual harassment.
As a society we are so inured to violence against women that we now only react to the most heinous stories of rape. From Nirbhaya, the young woman who was training to be a physiotherapist in Delhi to the 27-year-old veterinarian in Hyderabad, the stories were so brutal that they had the power to jolt us even in our bubbles.
Both these crimes happened in big cities, they involved young women who were serious about being in the workforce, they both had multiple perpetrators, horrific mutilation and murder.
Each time, it takes something worse to elicit a reaction from us. Then we demand the death sentence, castration or, as they are doing in Hyderabad presently, mob justice. Even a lawmaker asked for them to be lynched and one television channel promptly polled is viewers: India says lynch rapists, do you endorse the demand?
Think of #MeToo as our latest response to this rape culture. Think about that the next time it so much as crosses your mind that #MeToo has raised pertinent questions about how we should handle sexual misconduct. It puts pressure on courts and workplaces to implement the laws that already exist.
This free pass to treat women as non-sentient beings starts when we bring up our daughters on the `Shame-Blame’ diet, and when we repeat that mantra of “less than” – “you are less than this, you are less than that.”
We tell our sons that the world and everything in it – women included – belong to them to use as they please. I’ll add two riders here: This is an unsafe country for all children, no matter what their gender and often, it is women who transmit these patriarchal messages to their children.
Here’s another way to think about #MeToo. All the stories you hard – and didn’t hear – about sexual harassment n the workplace are one big reason why so many women opt out of the workforce. It’s not safe. Rampant sexual harassment exists even in garment factories which are powered by women workers.
Only nine countries have a lesser proportion of working women than India – and many of them are countries at war. Women are relinquishing public spaces and opting to stay at home. Families have a readymade excuse to refuse to let their daughters step out of the home.
You should #MeToo because it is not just some unnecessary drama by a bunch of privileged women about how men behave. It’s our latest attempt to make you respond to a national crisis that must be addressed. No country can be a superpower if half its potential workforce feels unsafe at work.
When I began working, there were no rules against sexual harassment in the workplace. We didn’t even have the language to describe sexual harassment. We were fighting other battles – the right to be on the table, the fear of arranged marriages – and we were certainly not encouraged to speak out. We only shared our stories with each other, often as a way to warn each other. It was only in 1997 that we got the Vishaka Guidelines and then, in 2013, Nirbhaya’s rape resulted in the sexual harassment law.
The biggest trial after this new law is unfolding in your state with all the usual elements of victim-shaming, delays and intimidation.