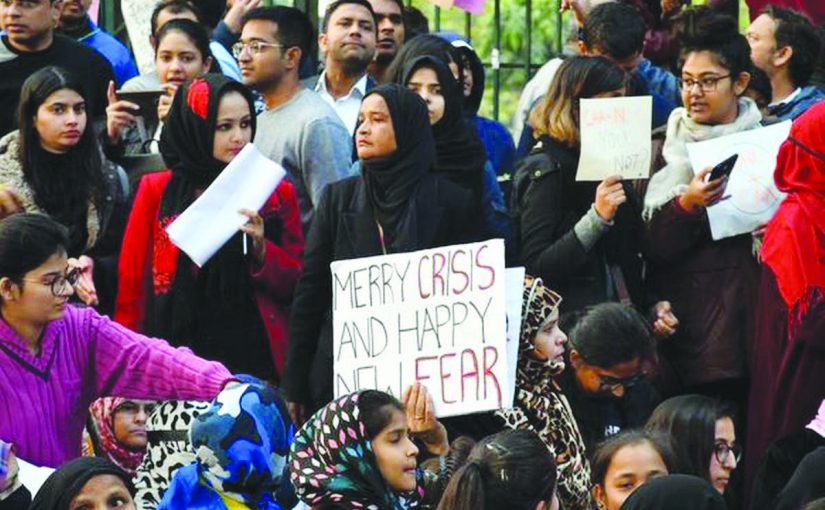 LEAD: For the first time the otherwise quiet students of the Jamia Millia Central University took the lead in revolting against the Consitutional Amendement Bill and the proposed National Register. The police attacked them brutally not only with lathis and tear gas but even water cannon. The students have submitted an FIR at the Jamianagar Thana for assault on students but it has not been registered. They are also asking for the CCTV footage

The student revolt which has spread across the country started at the Jamia Millia Islamia. It was a spontenouse protest against the new Citizenship law and proposed Nationwide NRC. The University which has no union is witnessing it’s first ever mass protest like the protest in the Patna University by JP who led the revolt against the emergency imposed by Indira Gandhi

Inside the reading room are echoes of a noise from a week ago, much louder than the kind libraries typically abhor, one that had forced the students to flee in panic, leaving behind their bags, a book shut with a pen still within the folds of its pages, a stole on the desk as its owner ran into the winter chill outside, geography notes on the Satpura Range with a map of India squeezed into the margin. On the floor at the far end of the hall, among upturned blue chairs and wooden benches, lies an exploded tear gas shell. “This is where it landed,” says a staff, pointing to deep scars on the floor. In the corridors outside are darkened, dried drops of blood and shards of glass.
police crackdown

It is nearly a week since the December 15 police crackdown on Delhi’s Jamia Millia Islamia, when forces had entered the university, clashed with students, and lobbed tear gas shells in the library and elsewhere on campus, leaving many of the students injured. The shock at the police action has since blown up into domino protests across the country against the new Citizenship Amendment Act and a proposed nationwide National Register of Citizens (NRC).
“Many forget that this is a university that was born in the throes of the freedom movement with the active patronage of Mahatma Gandhi. In a way, when these students fight for their Constitutional rights, they are upholding that legacy,” says Manisha Sethi, Associate Professor at Jamia’s Centre for Jawaharlal Nehru Studies.
The 1920s were times of deep tumult. It was around this time that the anti-colonial Islamic activism of the Khilafat movement and the pro-Independence aspiration of the Muslim intelligentsia came together on a common platform of the Congress’s non-cooperation movement.

Responding to Mahatma Gandhi’s call for a boycott of educational institutions sponsored by the British, a group of nationalist teachers and students quit Aligarh Muslim University (AMU) — which then, along with Banaras Hindu University, enjoyed British State patronage and was thus seen as pro-British — to set up the nationalist Jamia Millia Islamia (Arabic for National Muslim University) as a small campus outside AMU in 1920. In a curious turn of events and politics since then, a hundred years later, Jamia and AMU now find themselves on the same side of the citizenship debate and the protests over it.
central university

The university, which became a Central university in 1988, has 22,000 students, including those in its middle and senior secondary schools. Jamia also runs a day-care centre and a nursery school as part of a unique integrated approach to education.
Rizwan Qaiser, professor of Modern Indian History, admits that unlike his alma mater JNU, Jamia hasn’t seen too many protests, at least none of this magnitude since the 1992 protests against then pro-vice-chancellor Mushirul Hasan. Hasan, who had spoken out against the then Narasimha Rao government’s decision to ban Salman Rushdie’s Satanic Verses, was assaulted and hounded out of campus allegedly by the conservatives among both faculty and students. Hasan came back for a successful stint as V-C from 2004-09, during which he was credited with rebuilding the university, and more importantly, steering it through the tough times that followed the Batla House encounter of 2008, in which a Jamia student was killed and two of them were arrested.
As identities sharpened and political parties pointed fingers at each other, senior BJP leader V K Malhotra called the area around Jamia a “den of terrorists”. Teachers and former students speak fondly of how Hasan led from the front, winning over students by addressing them on the steps of M A Ansari Auditorium, and saying, “I, as your teacher and on behalf of the other teachers of Jamia, will support you in every hour of crisis. You are like my children. And a father can’t abandon his children in this hour of crisis.”

In 2005, Hasan even briefly lifted the ban on the Jamia students’ union, but it was again banned the following year. While there have been demands from student organisations on campus — among them the Students’ Federation of India (SFI, the CPM’s student body), AAP’s Chhatra Yuva Sangharsh Samiti, Congress’s NSUI and SIO or the Jamaat-e-Islami Hind’s Students’ Islamic Organisation — to revive the union, the matter is still pending in the Delhi High Court.

Which is what makes the current student protests, held in the absence of an organised student grouping, even more remarkable, says Qaiser, sitting in his Room No. 6 at the Mohibbul Hasan House that houses the History Department and which is named after Mushirul Hasan’s father and the historian who started the department at Jamia.
“This looks like the May Fourth Movement of China (an uprising led by students who objected to the China government’s weak response to the Treaty of Versailles, signed after World War I). It’s heartening to see such an articulate response to divisive politics. This time, it’s an existential question,” says Qaiser, while emphasising that Jamia is not the focus of these protests. “The focus is on CAA and NRC, which are clearly not in the best interest of the country.”