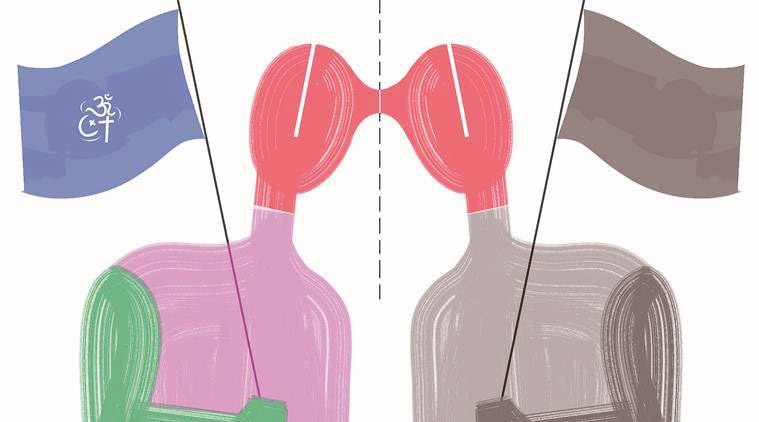 The RSS has been perfecting its techniques of lies and rumours, innuendo and doublespeak, for a whole century!

Our language is tainted and crippled by being pressed into the service of inhumanity.

It is not an edifying spectacle, seeing the great and the good floundering like this, falling over themselves, then over each other, lying desperately to try and salvage something from the train wreck of the Citizenship Amendment Act-National Register of Citizens.

In a sense, the RSS has been perfecting its techniques of lie and rumour, innuendo and doublespeak, for a whole century. So, Mohan Bhagwat now assures us, all 130 crore of us, including the lynched and the lynchable, are Hindus, provided we match Mr Bhagwat’s standard of being “true sons of India” — thanks, I say, but no thanks! And, for all one knows, underlying the dogged and insidious pursuit of “Hindu Rashtra”, there is the millennia-old Brahminical tradition of the Hindu-savarna maintaining their social tyranny through a combination of violence and lies and, crucially, hypocrisy.
It is appropriate, therefore, that though there have been protests and demonstrations across the country, the greatest amount of police brutality and violence has been concentrated in UP — not only because the head of the state government is a saffron-clad “yogi”, but also because it is here that there is the highest concentration of the Hindu upper-castes. It is here that one can expect them to make their last stand. All the institutions of the state stand infiltrated, and the India imagined in the Constitution — of equality and social justice, of rights and the rule of law — might as well be on another planet.

We have all seen the heartbreaking visuals of the police brutality from Jamia and Aligarh, from Muzaffarnagar and Kanpur and Meerut, 20 dead and still counting. (More killed, incidentally, than in the entire Hong Kong agitation.) But tragic as this is, it is not surprising. It is a direct consequence of the fact that now, finally, even in the eyes of young who might once have been deluded by the dreams of development, the conmen stand exposed. The young now realise that far from waking into some shining “New India”, they are being led into a guaranteed disaster, comparable to that which was brought upon Germany by the Nazi pursuit of an exclusivist “Aryan” nationalism. After all, it is the young who will inherit that poisoned and devastated country, and not ageing “urban Naxals”. But I see no reason to dawdle here, amid helmeted policemen armed with sticks and guns, beating helpless people, amid the haunting sound of mothers and fathers grieving over the broken bodies of their children. Except, en passant, to ask: Where, and how, do they produce such monsters? I suggest that the daily inoculation with lies and violence has, over a period of years, produced a race of android “New Indians” who are immunised against empathy and imagination.

But beyond this matter of lies and violence, I wish to explore the connection between violence and language. The horrors of the 20th century prompted much reflection on this matter. The classic text is George Steiner’s exploration of what the violence of the Nazi experience had meant for the German language — Language and Silence: “Everything forgets. But not language. When it has been injected with falsehood, only the most drastic truth can cleanse it…Words that are saturated with lies or atrocity do not easily resume life.”

One last quotation must suffice before I turn to our own experience of atrocity and language: “Languages have great reserves of life. They can absorb masses of hysteria, illiteracy and cheapness… But there comes a breaking point. Use a language to conceive, organise and justify Belsen, use it to dehumanise man… Something will happen to it. Something of the lies and the sadism will settle in the marrow of the language. Imperceptibly at first, like the poisons of radiation sifting silently into the bone. But the cancer will begin, and the deep-set destruction…” The lynchmobs forced Tabrez Ansari to utter “Jai Shri Ram” even as they were beating him to death. Ironically, now and forever, “Jai Shri Ram” will remain linked with the battered corpse of what was once a man. Our language is tainted and crippled by being pressed into the service of inhumanity.
Confronted with the vapid chatter around the pain and suffering that is on offer nightly, the garrulous inadequacy of TV panelists in the presence of everyday horror, one is tempted to repeat Wittgenstein’s stern aphorism: Whereof we cannot speak, thereof we must be silent. But there is another thought that arises in the currrent context of the explosion of protest, the nationwide affirmation by the young that they will not accept the bitter and divided nation that is the outcome of the CAA-NRC process. Rejecting Wittgenstein’s philosophical modesty, in the face of that about which we are commanded not to speak, we must shout and sing, we must mock and ridicule, lavish the authors of the violence and the repression with contempt.

And it is truly a miracle that in response to official brutality, there has been an explosion of wit and poetry, of humour and creativity, all the way from posters to YouTube videos. Pitted against louts chanting “goli maaro saalon ko”, they are making jokes — “Hindu-Muslim raazi, to kya karega Naazi”.
They are singing songs, mocking pomposity with poetry, flooding the internet with sass and style that is beyond the reach of semi-literate Sanghis. Kumar Sundaram’s mocking “Naxal” poem — “aage Naxal, peechhe Naxal” — could have put an end to the fatuous label “urban Naxal”, provided they were fully literate. Hussain Hydari’s bitter poem, with the refrain “bus mat jalaiye” holds a mocking mirror to P.M. 2.0 — “more dangerous than P.M. 2.5”, one poster jokes, alluding to a relatively benign form of pollution. Another proclaims that his papers got burnt in Gujarat in 2002.
Perhaps it’s time for another “free and frank” interview with Akshay Kumar?

The writer taught at the department of English, Delhi University