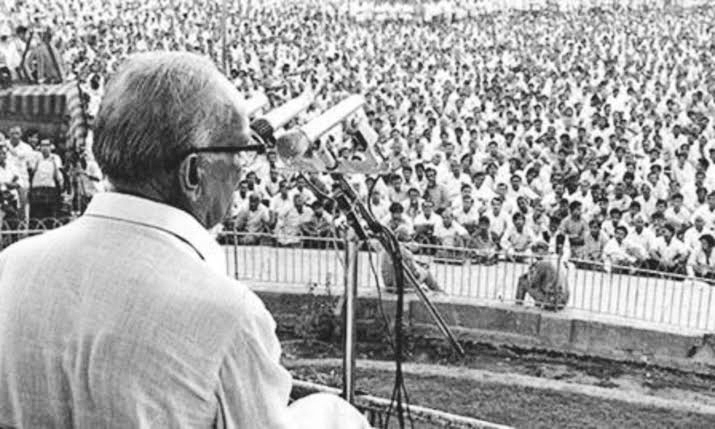 STRIKE: Most student agitations in the country start in the college mess where the food is unsatisfactory and students have their thali and spoons to make maximum noise.

By Leena Misra, Gopal B Kateshiya

It was a student’s strike in an engineering college in Gujarat, over a trivial issue like the mess bill, which sparked off the student revolution which led to the overthrow of the Gujarat government and resulted in the emergency declared by Indira Gandhi…

In 1974, a student agitation from an engineering college here on mess bill led to overthrow of the state government. 46 yrs later, Morbi’s LEC is untouched by CAA, even as its hostels remain stuck in time that, in turn, became the only student agitation to force a government out in India. More than 45 years later, as campuses across the country see protests over the Citizenship Amendment Act (CAA).

And yet, it is in LEC hostel messes that 1973-74 lingers. LEC has seven men’s hostels for around 900 students — A, B, D, E, (C was pulled down after damage in the 2001 earthquake) and New Hill, New Hostel, NVP — arranged in a rectangular complex named after the river Machhu. There are two women’s hostels — F, G — for 140 students.
Every hostel has its own mess and Mess Secretary, with students deciding the menu and paying per meal. The Mess Secretary of Machhu A, Swapnil Sawant, a second-year production engineering student, says he has been trying to get the authorities to install a gas-fired stove.
Today evening, the mess, which charges 35 for regular meals and40 on days with dessert, has drawn only about 35 of Machhu A’s 100 students. The initial spark for the 1973-74 agitation was a `40 rise in monthly food bill.
None in the Machhu A mess has heard of that protest except Jay Baraiya, a third-year student of electrical engineering. After some prompting, he says, “Yes, the mess bill was increased, so students protested and the Congress government lost.”
The LEC protest had coincided with a similar revolt at Ahmedabad’s Lalbhai Dalpatbhai (LD) College of Engineering, 190 km away. Gujarat then only had five engineering colleges, all run by the government. Affiliated to Gujarat University at the time, LEC and LDCE are now under Gujarat Technological University.
Prof Saurabh Pandya, the incumbent principal of LEC, who did his graduation from LDCE, points out that a lot coincided for LEC to emerge as the epicentre of the protests. “In those days, merit students enrolled at LEC, and the faculty was ‘intellectual’. The students did not have laptops, mobile phones or TV, and kept themselves engaged through other activities. The government of that time was not stable,” he lists.

Incidentally, just as the anti-CAA protests were fuelled by police action at Jamia Millia Islamia, and alleged police passiveness at JNU, the intervention by the force also tipped matters in 1974. On January 3 night, police entered LDCE premises and picked up students, recalls Umakant Mankad, a Congress leader who at the time was an electrical engineering student at LDCE and active in student politics.
The teachers too joined the students, angry over how their salaries were paid. This was also the reason why then chief minister Chimanbhai Patel became the target of the anger. Having been a professor of economics at St Xaviers’ College in Ahmedabad, he was trustee in many Gujarat colleges.
The agitation was given its name, Nav Nirman (Reconstruction), by local journalist Rajendra Sheth, who was one of the advisors of the Nav Nirman Yuvak Samiti (NYS), which led the agitation.
Later, the movement got national support when Jay Prakash Narayan lent it his support. His Sampoorna Kranti movement in Bihar against corruption, inspired by Nav Nirman, eventually precipitated the imposition of Emergency in 1975.
Mankad believes the 73-day agitation also laid the foundation of the BJP, then the Bharatiya Jan Sangh, in Gujarat, with many leaders of the party emerging from the movement. Like Bhupendrasinh Chudasama, the current Gujarat Minister for Education, then a 25-year-old Jan Sangh karyakarta. He describes his achievement as “success in creating public awareness and roping in teachers, students and businessmen”. A blog on Prime Minister Narendra Modi’s website also talks of his involvement with the movement.

At one high point, people came out striking rolling pins on steel plates in response to a ‘Sarkar no mrutyughant (death knell for the government)’ call. With his position untenable, Patel stepped down as CM on February 9, 1974. Among those saddened by this “apoliticisation” is Ahmedabad-based documentary filmmaker and writer Manishi Jani, 68, who led Nav Nirman as president of the NYS. A Master’s in Philosophy student, he was at the time the only elected student member in the Gujarat University Syndicate, a policy-making body at the university. “This set up an official leadership of students,” he says.

Jani was jailed with around 125 students, and negotiations for their release were held with then union home minister Umashankar Dixit and prime minister Indira Gandhi. “The night we were to speak with Gandhi (March 15), the Gujarat Assembly was dissolved Indira Gandhi had wanted it to seem that the government negotiated with the students and declared the dissolution. Next day, we were freed and boarded the only metre-gauge train between Ahmedabad and Delhi back home. We were felicitated at every junction. The train took almost two days to reach Ahmedabad.”
Jani is now among those leading a campaign against the CAA, and asserts, “People are always hopeful change will come at the end of a mass movement.”
Prof Gojiya, who headed the Morbi unit of the NYS, believes that may be wishful. “Today’s student politics has been reduced to a stepping stone for party politics,” he says. “In our time, no politician would dare meddle with an educational institute and students respected teachers. But today, students are pawns. In such a scenario, it is advisable not to have student union elections.”
At Ground Zero of Nav Nirman Andolan, in a Gujarat that has come a long way from 1974, the students agree. Gujarat University has seen no union election since 1998, points out Congress spokesperson Manish Doshi, a former student leader.

Asked whether elections ought to be revived on campus, Chudasama says, “Punah vicharan karna zaroori hai (we need a rethink on this). Look at our other two state-run universities, Bhakt Kavi Narsinh Mehta (Junagadh) and Govind Guru (Godhra). They are running fine without elections.”
Both admit they don’t know much more than the basics regarding Nav Nirman.
Not that it worries LEC students. Says Rahul Laurabhiya, a fourth-year chemical engineering student, “Our needs are fulfilled, so we don’t need to agitate. Why not focus on studies instead?… I don’t think we need andolans or elections.”