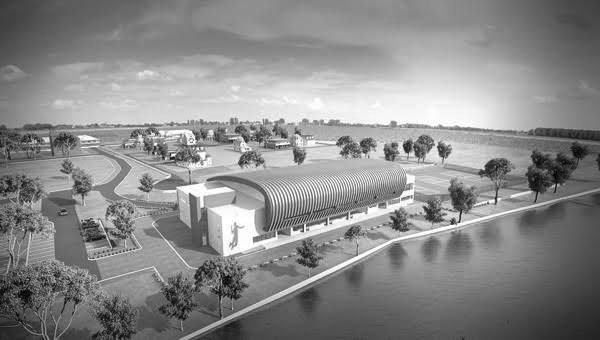 CHIEF Minister Pramod Sawant has been busy inaugurating various sports stadiums in preparation for the 36th National Games of India to take place in Goa later this year from October 20 to November 4, 2020. Reportedly five indoor stadiums located in Panaji, Ponda, Navelim, Sawalwada and Fatorda have all being refurbished or built and extended anew for the games so that Goans may look forward for some exciting times coming up.
Amongst the first to be blessed is the multi-purpose Indoor Stadium at Navelim, named after late Manohar Parrikar (chief minister of Goa and defense minister of India), present for the inauguration with CM Sawant were Union Minister of State for Youth Affairs & Sports Kiren Rijju, he was chief guest while AYUSH Union Minister of State Shripad Naik, Deputy Chief Minister Manohar Ajgaonkar (also sports minister) and other dignitaries were present for the inaugural occasion.
Other inaugurations followed at the multi-purpose Indoor Stadium at Campal in Panaji, Indoor Stadium in Ponda, Indoor Stadium at Sawalwada and Indoor Stadium at Fatorda, all of which were officially inaugurated on January 28, 2020. The stadiums have undergone months of renovation with major work on exteriors as well as interiors to turn them into world-class sporting facilities and they are now ready for use for multi-discipline sporting events such as the National Games of India. The construction and refurbishment costs of the five stadiums is reportedly Rs120 crore while the Goa government has estimated an expenditure of Rs750 to host the games.
About 24 different sports disciplines will feature as part of the National Games across 37 sports facilities and Goan sports enthusiasts and well as visiting sports fraternity may look forward to some thrilling moments, on par with those of yesteryear national and international sporting events like Lusofonia Games, AFU U-16 Championship, BRICS Football championship, FIFA U-17 World Cup to name just a few. Goa has both a past, present and future as one of the sporting states of the country!

TO mark the 75th anniversary of the Heartfulness Institute the world’s largest meditation center opens in Hyderabad. The center is all set to be officially inaugurated in the presence of 40,000 abhyasis or practitioners of heartfulness (as this form of mediation is called) on January 28, 2020. Daaji, the global guide of heartfulness, dedicates the meditation center to the first guide fondly known as Lalaji. Renowned yoga guru Baba Ramdev is reportedly going to be present on the occasion.
For your information the magnificent one central hall and eight secondary halls spread across 30 acres can accommodate 100,000 practitioners at one go, making it the largest closed structure meditation center in the world. Lit up at night the new center looks as resplendent as many another grand structure like Sydney Harbor for example. The heartfulness facility is spread over 1,400 acres in a self-sustained ecosystem which can host 40,000 plus people and has kitchen capable of preparing food for 100,000 daily. There is also an upcoming 350-bedded AYUSH medical facility, nursery of six lakh saplings with several lakh trees planted over the last four years. Heartfulness Learning Center’s aim is to catch young minds.
What is heartfulness? It is a Raja Yoga system of meditation also known as Sahaj Marg or the Natural Path. It originated at the turn of the 20th century and was formalized by the founding of Shri Ram Chandra Mission in 1945 in India. It has a following of several million practitioners worldwide. The easily adopted practices are for people from all walks of life, cultures, religious beliefs and economic status once they are over the age of 15 years.
There is an ongoing heartfulness meditation training going on in schools and colleges with over a 100,000 professionals engaged in the meditation in corporations and non-governmental and government bodies worldwide. There are more than 5,000 heartfulness centers known as Heartspots supported by thousands of certified volunteer trainers across 130 countries.
On the cards are three-day sessions during Jan 28-30, Feb 2-4 and Feb 7-9 to host 1.2 lakh practitioners as part of mass meditation to commemorate the milestone of 75 years. President of India Ramnath Kovind and Anna Hazare will address the gathering on Feb 2 and 7, respectively. Baba Ramdev will give his address on Jan 29. Amongst the prominent guests expected are several state governors and other dignitaries.

The Council of Social Justice Peace is joined by the National Confederation for Human Rights (Goa Unit) and Concerned Citizens for Democracy in registering its total disapproval against the Citizenship Amendment Act (CAA), National Register of Citizens (NRC) and the National Population Register (NPR). It is our common conviction that these measures are unconstitutional and, therefore unacceptable.
The government must listen to the voice of the people and withdraw the Act. It can then engage in wide consultation if it still wishes to proceed with any form of legislation regarding citizenship. If it arrogates power to enforce the laws, it will face stubborn and unceasing resistance.
The government should also take note of the fact that this is the first time since partition that people across the country have demonstrated an unyielding show of unity cutting across all religions and social formations to register their protests on the streets. It is close to a month and the struggle is sustained by the citizen’s own initiatives since this law endangers democracy and secularism.
The government is resorting to the abuse of law and order mechanisms and intelligence agencies to suppress this popular people’s movement. We have noticed how, in many parts of the country, the government has been high handed in undermining the protests. They have unleashed violence and adopted intimidating tactics against peaceful protesters. Here in Goa, conceding to the threats by a fringe group, permission granted to citizens of Mapusa for a peaceful protest was revoked on flimsy grounds. We, as a people, in a democracy, have the right to resist any illegal form of legislation. We demand that all the law enforcing institutions also respect the tenets of democracy and cease their undemocratic and punitive ways. Politicians and responsible government officials must recognize that they work for “we the people”.
Around the country, the police have repeatedly repressed the right to peaceful assembly by using needless force against people exercising their rights, including beating peaceful protesters and using tear gas, and reckless shooting. Detained protesters including children have also been severely beaten in custody and suffered other ill-treatment amounting to torture. Multiple instances of arbitrary and unlawful arrests have been reported. The police has even denied or delayed access to lawyers and medical care to the detainees. State violence is not an answer to legitimate protest.
As responsible citizens who wish to see to a just and peaceful society functioning demand the most transparent and strict forms of democracy. We demand that we have access to a Sovereign Socialist Secular democratic republic which grants all its citizens justice, social, economic and political.
The government is steamrolling laws which demand that we must prove our Indian citizenship despite having all relevant documents on record. It is unlawful to disenfranchise genuine citizens whose legal rights to stay in this country cannot be challenged. In view of this vicious and deceitful method of de-citizenizing millions of people, we as people must not only reject the proposed NPR process but refuse to cooperate with NPR. This is our firm and non-negotiable conviction. Towards this, we issue a call to oppose any illegal enforcements of the law.