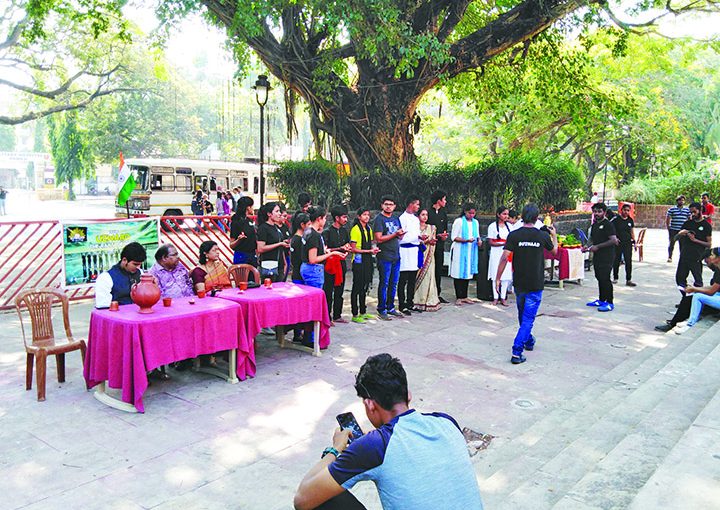 THE leaders of the BJP have started branding Shaheen Bagh protestors against the contentious Citizenship Amendment Act (CAA) and a proposed pan-India National Register of Citizens (NRC) as anti-social elements, anti-nationals, traitors, with an eye on the upcoming Assembly elections in Delhi scheduled to be held on Feb8, the votes of which will be counted on Feb11.
I still don’t understand why BJP leaders can’t fight a single election in the country making a strong promise of eradicating hunger, poverty, unemployment, corruption, casteism, communalism, and instead forever begging for votes to spread hatred amongst their own citizens based on caste, religion, talk only of Islam, Muslims, Pakistan, Kashmir, Ram Mandir, love jihad, conversions, CAA/NRC/NPR, etc?
Prime Minister Narendra Modi in his much hyped radio address Maan Ki Baat recently advised those taking part in the ongoing anti-CAA agitation in the country to shun violence and weapons to resolve matters peacefully. If he is really serious why is he still not banning fascist rightwing RSS, VHP, Bajrang Dal and others of his own party for openly storing and displaying dangerous lathi, guns, swords, trishul, and other weapons for carrying out attacks on minorities in different parts of the country in the name of pseudo-nationalism?
Why is he refusing to take actions against his own party leaders like Anurag Thakur who despite being Union minister dared chant “desh ke gaddaron ko” to which his supports responded “goli maro salon ko”(shoot down the traitors) while addressing a public meeting in Delhi Rithala Assembly constituency recently, obviously referring to the Shaheen Bagh protestors.
BJP leaders have a lot to answer for if they really want to win the confidence of the people in the near future, because now everyone knows who are traitors and real patriots are. It is patriots who are fighting to uphold rights of freedom and defending the Indian Constituition. Jai secular India, long live the Indian Constitution!
— Jerry Fernandes, Saligao

CORONAVIRUS FEARS
THE escalation of the coronavirus in different countries and lack of remedy is frightening. Can it be cured at all? No one knows. The only measure is to halt it from spreading. Therefore, the risk element is very high and measures should be taken at all levels.
The risk for Goa is that it is a well-known tourist place and very likely to see infected people from China and other affected countries coming to India and Goa. These same people from abroad will visit their home states and the virus may spread. It is well known that foreign tourists to Goa often first visit Thailand and then come to Goa.
Health advisories say maintain hygiene but is this possible? Considering the high frequency of coughing and spitting in public which goes on. Screening at all entry points like ports has been in place but this is only on paper. Does Dabolim airport have a temperature scanner? Not yet. From the SARS times we know that such a scanner was shifted to another airport while local government remained in strict silence. Our local ministers are powerless in front of Central and neighboring ministers! Nobody yet knows how the virus is transmitted even when there is no high temperature.
Hence, we need to keep tabs of all tourist handling agencies who need to compulsorily report all the tourist batches they have sent to affected countries in the last ten days. It is better that all casinos publicly ban entry of clients coming from virus affected countries, if not the government is only gambling with the lives of its people, and tourists.
Allocation of separate wards at the GMC and Chicalim have been done but can our dismal levels of hygiene contain this virus in our hospitals? It’s a definite, No. China built a new hospital to contain the virus in six days. They have the most knowledge on the virus and found the need to truly isolate such patients from mainstream society. In Goa can the South Goa District Hospital be commissioned quickly for affected patients? Is the risk level not high enough to justify this and why are we waiting for what?
What about PPE-personal protective equipment for staff and doctors? Has this been provided in adequate numbers? From experience we know government is only good for talking and not acting at ground level to execute matters. Lesson to be learnt: Instead of Swaach Bharat we need to ban public spitting first.
— R Fernandes, Margao
ROADS FESTIVAL PLEASE!
MY head is reeling with Traffic Police at it again to collect fines for minor misdemenors like not having a helmet even in small-town Panaji and even if you’re driving at snail speed. I think some philanthropist like Hero Honda or Serendipity boss Sunil Munjal, or some Goan bigshot should be wooed to bankroll a Roads Festival annually – and during this week experts and labor should be brought in to repair, smoothen out roads, clear and define pavements, remove junk and litter hillocks in town at every corner including beneath trees, remove dangerous advertising at idiotic places, de-choke gutters, repair gutter covers, cheer up roadside and public garden furniture, etcetera… generally speaking really smarten up Panaji town! Hey, a Roads Festival, anyone? Ponjekars will really appreciate it, make it annual festival! Any true blue philanthropist listening? Let us have more practical festivals instead of festivals of talks and ideas and celebrations of this, that and other useless causes.
— Sarita Naik, Panaji

RESPECT JUDICIARY, PLEASE!
IT is deplorable that the Town & Country Planning Board is continuing to consider applications for zone change under Section 16B of the TCP Act, despite the provision being under challenge before the High Court.
The colossal environmental degradation that Goa has been and is today witnessing by way of rampant destruction of hills, fragmentation of pristine vegetated verdant landscapes and ruthless chopping of trees — by not even sparing pouring concrete in low lying fields, is taking a toll once scenic and picturesque Goa.
Lack of proper planning while cluttering of environmentally incompatible new constructions all over without the much needed infrastructure, has landed Goa in its current state of utter chaos. With political blessings the real estate mafia has swiftly enriched itself multifold while leaving the common man to face the brunt of their misdeeds.
If those in power do not take urgent corrective, well planned and sustainable measures to save our remaining natural ecosystems, our God-gifted landscapes – eco- sensitive beaches, sand dunes, khazan wetlands, salt pans, last remaining hills and farms, orchards, rivers, estuaries, lakes, ponds, springs, fountains of Goa – which keep our environment green and healthy, we will soon be fighting catastrophic disasters.
— Aires Rodrigues, Ribandar