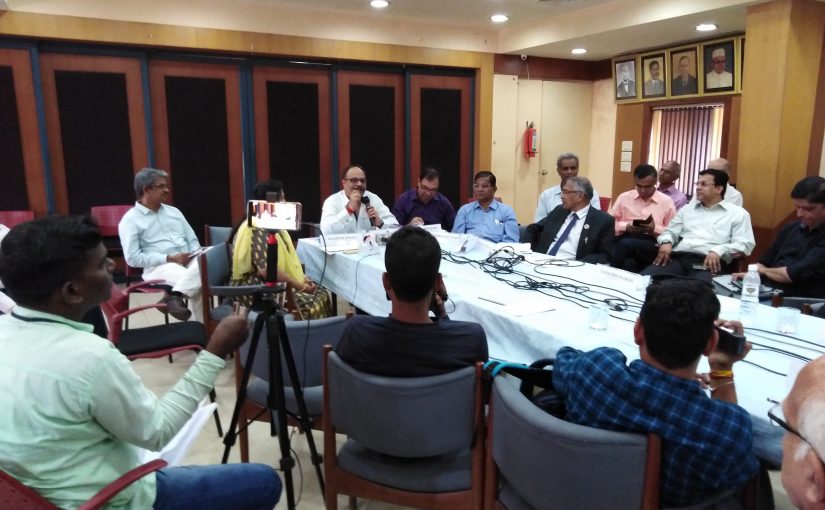 Full of drama and confusion and a very tired Finance Minister Nirmala Sitharam!

The Central government budget impacts aam aadmi so much that naturally everyone who counts for something wants to know how tough life is going to become for them again and anew. For many the Goa Chamber of Commerce Convention Hall in Panaji was the best place as budget day dawned on Saturday morning, February 1, 2020.
The hall was packed with GCCI members including President Manoj Caculo and immediate Past President Sandip Bhandare, as also captains of business and media people dropping by to catch the live relay on big screen with Finance Minister Nirmala Sitharaman stretching her painstaking detailing to nearly three hours. Some could be heard asking if it was longest budget speech in Parliamentary budget history because the finance minister is a woman! Do women politicians know how to be short and sweet? Unfair, of course.
But at the end of all her constant reeling out of facts and figures in multiple crore set aside for a plethora of schemes for this, that and the other, all in the interests of setting the country’s economy rolling along to a dream trillion dollar economy – it looked like many were more at sea rather than on land.
To most it sounded like yet another inflationary budget to make aam aadmi’s life miserable, although there were differing “expert” opinions about the “aspirational, economic and humane” budget, words which the finance minister played with throughout her budget with, with lots of stresses and reminders about something being important so please listen carefully before jumping to conclusions.
The budget continues to be a deficit budget although Mrs Sitharaman described her budget as that of “an aspirational India, bouquet of flowers…we want a happy, caring country.” Highlights ranged from Central government’s debt coming down to 48.7% in March 2019 from 52.2% in March 2014, with 271 million people out of poverty 2006-16, personal income line drawn at 5 lakh annually and thereafter a rationed increase payable (never mind that most countries have freed their people from paying personal income tax but are implementing wealth tax seriously).
Clearly it’s a budget of highs and lows and this came through with various GCCI members afterwards clarifying what seemed to be difficult to get at first. While GCCI President Manoj Caculo expressing his take said it was below expections budget, more a futuristic budget, more for tomorrow than today, Raghuvir Vernekar described the budget as “a wishful thinking” budget which will depend more on necessary steps to be taken if we are dreaming of a “10% growth” economy. It all depends on infrastructure development for only with increase in infrastructure will consumption increase. At the moment people are afraid of spending. On the minds of most speakers was the question of political stability for economic growth, if there is no political stability it will negatively definitely impact quality of economic growth.
Chadrakant Gauns welcomed the budget “as an overall aam aadmi budget.” GCCI Vice-President Pratima Dhond too agreed that it was an overall good budget with good thinking although there was not so much for women except for the money to upgrade anganwadi facilities and boost self-help groups with NABARD aid; helping women would go a long way towards making the economy stronger.
A businessman present who desired to be anonymous said in intention the budget was very good but “it is always a deficit financing budget.” He was not happy about the “GI tagging of land” which means the government is eyeing people’s land. Whatever land takeovers there are they should first keep in mind the environment, there is something called eco-development and this is not just use and abuse of various schemes for political vested interests.
We should stress on clean energy business environment and the government taking away surplus railway land for solar energy power development is a good idea, but remember corruption is also more than ever rampant in the India of today. Is the issue of growing massive unemployment being redressed by the budget or will political instability worsen this? All kinds of high quantum technology may be wooed to make India No. 1, No.2 or No.3 in the world, but all this comes along with more complex crime scenarios which our police may or may not have the time to unravel to make a difference for the better as quickly as possible. (This is with reference to the `8,000 crore being allocated over the next five years for quantum technology related computing.)
Most of the GCCI post-budget consensus opinion is that the 2020 budget maintains the status quo and it is not inflationary, but someone said the sentiment of industry is by and large that the government give no sops “but help us create markets which is the prime duty of the government, people should not be harassed for compliances…government duty is to create ease of doing business and stop corruption!” Nobody likes “coercive implementation.”
One person, Rajendra Narvekar opined, “It is an inflationary budget being a deficit budget, it always leads to wasteful spending in government which is not productive.” Ramchandran Wagle (former government officer and hotelier) added, “Only when there’s saving there is demand for consumption! No consumption, no markets.” But altogether for him the budget was very good and balanced given the reduction in personal income tax, it will bring middle-income people benefits, and in any case he thinks, “A little bit of inflation is required, it is necessary for markets to survive! Only extremes should be avoided, when savings don’t happen…”
Meaning, if there is nothing left over for people to save, they consume less and that’s where most aam aadmi in the country are today. In this respect Finance Minister Nirmala Seetharaman’s dream of a 10% growth economy is not digestible so far despite her booster doses promised. Perhaps after all her budget is a futuristic budget and aam aadmi will have to wait patiently for some more years for ache din to come!

Satish Magar, President, CREDAI National:
“Budget 2020 has not been encouraging for the Indian real estate sector which needs immediate attention from the government. No sector specific measures were announced for real estate and as an industry we expected more bolder steps from the government to revive the ailing sector such as providing more liquidity for the sector, onetime restructuring of loans, and tax deductions on home loans to give impetus to buyer sentiment. Unfortunately, none of these issues have been addressed, except providing tax holiday for one more year for to affordable housing developers and loan sanctioning which was due for some time. Budget 2020 needed steady fiscal invigorating measures, focusing on demand creation. The only way in which this budget can boost real estate sector is by accelerating growth to 6.5% in 2020-21 from 5% at present, boosting income and thereby inducing demand for new homes.”

Lalit Saraswat, Chairperson, CII Goa State Council:
“Given the current economic scenario Finance Minister Nirmala Sitharaman has presented the best budget focusing on aspirations, economic development and caring society. Steps to revive the economy will help attain the targeted growth rate for the next year.
This budget has laid significant focus on Artificial Intelligence (AI) which will drive out corruption as there will be more clarity with digitization.
Focusing on Goa, infra spending on cold storage, logistics and other areas would help the fisheries sector for the state. Encouraging farmer producer organizations for fisheries is also a welcome step for the state.
Better disposable income due to lower personal income tax will help consumption and tourism in the state. The Hon’ble Finance Minister has also announced 100 more airports under the UDAN schemes which will help in better regional connectivity and development.
Pan India investment clearance cell may be the single window that entrepreneurs hoped for.
Simplification of tax slabs and rates will leave disposable income in the hands of the taxpayer. Change in ESOPs will help start-ups in attracting top talent and thus be a great growth driver of the future.
Development of India as a word class higher education destination will have a huge long-term impact on the nation both in terms of net revenue and in terms of global talent.
Price stabilization fund will reduce retail inflation. Make in India and jobs boost with tweaks in custom duty.”