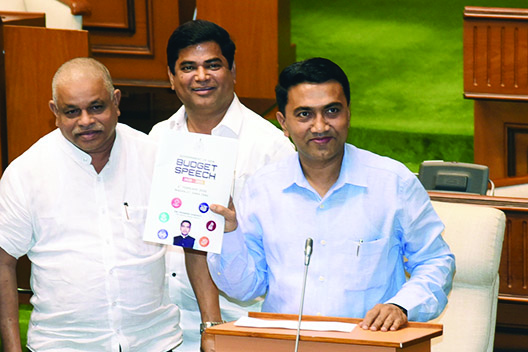 GOA BUDGET 2020-21: It was budget day on February 6, 2020, and Chief Minister Pramod Sawant presented a positive “surplus” budget of `353.61 crore pegged at a growth rate of 8.6% in the Goa Assembly. He admitted that he was aware that the budget is based on borrowed resources, but hoped to spend wisely on revenue and employment generating programs in the forthcoming year. With increases all around in various taxes naturally everyone was smiling along with Deputy CM Babu Kavlekar, MLA Dayand Sopte and Commissioner and Secretary-Finance DA Hawaldar (IAS) in the assembly house.

GOA’S mascot for the 2020 National Games was unveiled recently. A flame-throated bulbul or the yellow bulbul which is the state bird of Goa. Say bulbul and we imagine a small bird with a crest which most bulbuls sport. A very common mistake made is when people call the male paradise flycatcher a bulbul only because it has a crest. An important characteristic of the flame-throated bulbul is it does not have a crest! Its head is black. Yes, it has a white iris and flame red throat with olive green back and yellow under part – like the National Games mascot. The mascot could have done with an added quirky, smiling, sort of happy features usually associated with mascots. With growing urbanization our indigenous birds are disappearing. Along with the rampant denuding of nature pigeons have become pests and a rule needs to be passed not to feed them. Coupled with Mhadei water diversion and poor government intervention with the 2021 census Goa would become all urban! This should not be taken lightly but with due gravity. Goa is losing its natural charms.
— R Fernandes, Margao

RAILWAYS STORY
Cortalim constituency MLA Alina Saldanha objected to the double railway track passing through her constituency, recently. On grounds that the track was not necessary as many homes of the poor would be razed and they had requested her as their MLA to intervene and see if the track would be diverted or even cancelled. A senior Railway officer in charge of the project got angry and insulted her saying she was a Portuguese! She demanded and got an apology with the intervention of CM Pramod Sawant.
The point is do we really need railway tracks going through places where there are homes of people? Especially places without adequate security? Read the news today. Students of a Panaji-based college while touring north India reported that while returning from Chandigarh by train a staff member found a robber who had cut through the chain and stolen her luggage. What option does a victim have? By the time the theft was discovered the luggage was no longer on the boogies.
This is the second such theft I’ve recently heard about. We also hear about children being kidnapped on trains and from railway platforms. The government should increase security on trains with camera coverage on trains and stations. Increasing railway connectivity without increased security will only benefit thieves and scoundrels.
— Stephen Dias, Dona Paula

TAFFIC MAYHEM
THE authorities have miserably failed to deal with the traffic mayhem in Panaji. To add to the chaos hundreds of taxis are illegally parked all over the city. The law requires that the taxis be stationed at the designated taxi stands or at the residence of the owner. The double parking especially on 18 June road and Atmaram Borkar Road must stop. Traffic cops have been turning a Nelson’s eye at all those casino vehicles which are illegally parked in the No Parking Zone along Dayanand Bandodkar Marg. The residents of Sao Tome ward behind the General Post Office have been suffering for the last many years on account of the parking nightmare created by the casinos. The situation gets worse especially during weekends with casino staff and customers haphazardly parking their vehicles and even urinating all over, disturbing the peace and tranquility of residents of the area.
— Aires Rodrigues, Ribandar

QUIT SMOKING!
The National Organization for Tobacco Eradication (India) is extremely happy with budget which has increased taxes on cigarettes. Excise duty on cigarettes across various lengths increased: There is an overall increase of 6.8% tax per cigarette stick. If companies don’t pass this on, EBIT could be impacted by 11-13%. Assuming NCCD and basic excise duty clubbed. The larger negative basic excise duty of Rs5/1,000 sticks was added in budget 2019. Dalal Street feared this will increase in subsequent budgets. It’s a pity that taxes on beedies not touched.
— Dr Shekhar Salkar, Secretary, NOTE (India)

BJP SURPRISE WINNER?
ALL eyes are on Delhi Legislative Assembly elections even in Goa. The elections are on Feb8 and results will be declared on Feb11. Many people predict a massive victory for AAP in view of what are perceived as achievements in various fields.
Unfortunately, experience has shown that in India voters are cast not on real issues like employment, food, healthcare, education, etc, but on emotional issues like building Ram temple, protecting cows, treating minorities as anti-nationals and bashing enemy No.1 Pakistan.
Lately polarization on religious lines has increased in India rapidly and this will have an on Delhi elections. Most Hindus in India are hardcore religious-centric and habitually vote for parties which talk of giving them first class treatment or treating them like supreme born human beings fully based on their religion, by forever branding minorities as third class citizens if not like outside strangers and anti-nationals of this country.
The ongoing anti-CAA protests in Shaheenbagh are also seen by many Hindus as mainly a Muslim show with the large number of hijab and burqua clad ladies on our TV screens (as pointed out by Prime Minister Modi). In my opinion the Hindus in Sahheenbagh represent only 10% liberals amongst Hindus and students from universities — but not the majority of Hindus who support CAA.
Now let’s look at actual percentage of population in Delhi — 81.7% is Hindu, 12.8% is Muslim, 3.4% Sikh, 0.87% Christian. So looking at these percentage figures of the population and habitual mindset, especially of majority community, I personally feel that this might somehow just give BJP a clear majority in the 70-member house on the day of the Delhi Legislative Assembly election results.
— Jerry Fernandes, Saligao.