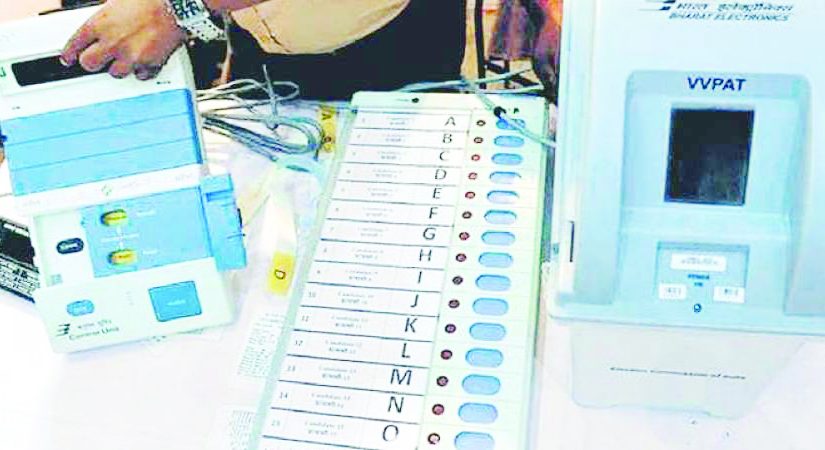 It is alleged that the BJP has captured power at the center and in many states by rigging the EVM machines. In the Delhi election AAP too has alleged that EVM machines from some booths were hijacked and had not reached the strong room where they are kept till the polling is over

The devices that India relies on to conduct elections, Electronic Voting Machines, have been in the news over the last few years, as politicians and activists have raised questions about whether they are at risk of being tampered with. With counting of votes set to take place on Thursday, the issue has dominated the news cycle, particularly with fresh allegations that EVMs are being transported without appropriate security.

Indian elections depend upon these low-cost, simple machines to register votes. Though very few countries around the world have switched entirely from paper ballots to machines in national elections, in India the EVMs are credited with reducing the amount of voter fraud that took place under the old system. This was commonly known as “ballot stuffing”, as thugs took over polling booths, kept genuine voters out and marked ballot papers with the names of the candidate they favoured.
There are three parts to the machine.
The first is the control unit, which is held by the election officer at every booth. This collects and records each vote, and has a battery so that the machine doesn’t depend on erratic power supply to work. The second is the balloting unit, which is a panel with a series of buttons next to which are the names, party symbols and, this year, photos of candidates.
Once voters have pressed the button of the candidate, a paper slip is generated and is displayed for seven seconds before dropping into a storage box. This Voter Verifiable Paper Audit Trail machine allows voters to check whether the party they selected was the same as the vote that the EVM registered. Later, these slips can then be audited against the votes actually counted by the EVM to ensure they tally.
Most importantly, no part of the EVM is “networked”. These are extremely simple machines, like pocket calculators, with no connection to the internet, no operating system and no way of being altered without physical access to the machines.

Can the EVM be hacked?

The simple answer is yes, because any machine can be hacked. But it would be very difficult. As this article explains in detail, since EVMs are not networked, altering their functioning would require access to the machines themselves. That means that entities attempting to hack an EVM cannot use remote access, such as through the internet, and would need physical access to the machines themselves or their cables, while going unnoticed by (or in collusion with) authorities or other party agents.
There is a simpler way to manipulate the vote: pressing the button for someone else. The Election Commission has ordered re-polling in Haryana’s Faridabad after video clips emerged of a BJP polling agent going up to the balloting unit and pressing the button before voters had a chance to do so. This sort of blatant fraud is supposed to be prevented by the commission’s micro observors and by polling agents of other parties.

What is the latest concern?

Videos and reports from a few places around the country have found EVMs being transported without the appropriate level of security mandated by the guidelines. This has led to fears that the ruling party has not hacked the EVMs that people voted on but is somehow trying to swap actual EVMs with other ones.
The Election Commission has dismissed these claims, saying that the EVMs that were used to register votes are all in strong rooms that are under 24-hour security, CCTV scrutiny and more. The Commission claims that the machines in a number of these videos are “reserve” EVMs, that are usually kept for cases of malfunctioning at the time of voting.
Despite this clarification, the Commission has not explained why even the reserve machines are not being transported with appropriate scrutiny, as the guidelines require.
That said, the Commission has reminded the public that the procedure for counting votes still includes several other checks to ensure the integrity of the process. Once voting is complete at booth, the EVMs and VVPATs are “sealed properly in front of parties’ candidates and videographed. CCTV cameras installed. CAPF security was present. Candidates are allowed to look at strongrooms at a time and one representative of each candidate 24×7,” the Election Commission said.
In other words, if the polling agents of political parties have been vigilant, any concerns about tampering of the actual polled EVMs would have been spotted and could lead to complaints or even action in court.

What are the older controversies?

There have been concerns about the functioning of EVMs at just about every level, which might be expected for a large country. Questions about EVMs first started coming from the Bharatiya Janata Party. It now finds itself in the position of defending their reliability, while the Opposition has been raising questions about the functioning of the machines over the last few years.

A controversy that emerged over the last few years has been the frequent cases of EVMs malfunctioning. In many of these cases, it seemed as if no matter what button you pressed, the VVPAT displayed a vote recorded for the BJP. In 2017, Scroll.in’s Abhishek Dey travelled to several places where such allegations were being made, only to find that most of the claims about the EVMs favouring the BJP did not stand scrutiny.
The Opposition has continued to push for greater VVPAT verification, a procedure in which votes on the EVMs are tallied against the slips on the VVPAT. The Election Commission rules recommend one booth in every constituency undergo full VVPAT verification. In April, the Supreme Court expanded this to five booths. The Opposition, however, has been demanding that 33% to 50% of all booths should have VVPAT matching.

While most experts admit that actually hacking EVMs would require a massive effort, some questions have been raised about whether the manipulation takes place at the manufacturing level itself. The machines are only produced by two Indian Public Sector Units, with engineers there having no clue where they will be deployed.
Frontline magazine has earlier used information received in RTI queries to report on a mismatch between the number of machines that had been manufactured and the number that had been received by the Election Commission of India. This mismatch has yet to be explained.

In 2018, with Congress leader Kapil Sibal in attendance, a purported cyber expert appeared at a press conference in London to explain how EVMs could in fact be hacked. His argument is that the machines are being hacked by low-frequency signals, and he claimed that several elections in India have been rigged in the past. So far, however, none of his claims has stood up to scrutiny, and other portions of the expert’s story have not been corroborated.

Are there other concerns?

Those defending the Election Commission have rightfully argued that the criticism of the EVMs from parties tends to ebb and flow depending on their political fortunes. But for the last two years, much of the Opposition has tried to remain consistent on this issue.
That said, looking beyond parties, several activists have raised genuine questions about the design and control of EVMs, and whether the Election Commission’s processes have been scrutinised and audited adequately. Though it has always been claimed that EVMs are about impossible to hack, unless done physically at every booth, technological advances make it vital to be constantly vigilant.
The Election Commission has, however, been prickly about any kind of questioning regarding EVMs, their design and the way they are handled. Transparency ought to be built into its procedures, some have argued. The Election Commission has earned a reputation for trust at least conducting elections (though perhaps not in uniformly applying the Model Code of Conduct). But, as this piece argues, rather than presuming it can rest on its laurels, it needs to keep re-earning that trust.