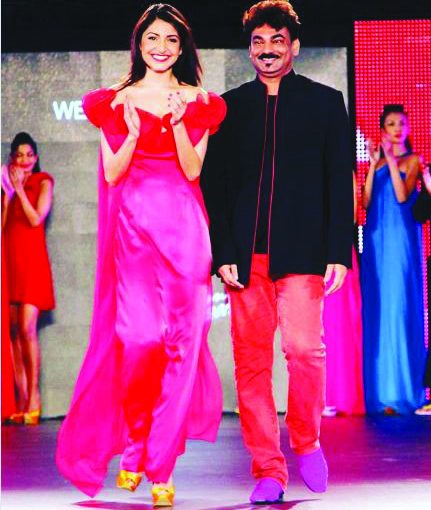 Wendell Rodricks who died peacefully in sleep, according to his secretary Mahesh, is truly a rag to riches story. Born in a chawl in Mumbai, Wendell’s first choice of his career was not fashion but hotel management. Wendell did a degree in Hotel Management and got a very handsomely paying job as the deputy manager of the Officers Club in the Gulf. But his heart was in fashion. With the encouragement of his French partner Jerome Marrel, Wendell studied fashion in London and the US. He did an apprenticeship in a leading fashion house in Paris.
The remarkable achievement of Wendell is that he came back to his roots in Goa and made the humble kunbi sarees of tribal women of Goa. When he entered the fashion world, the focus was on glamorous, richly embroidered lehenga which fashion gurus like Ritu Sarin specialised in. Wendell set a new trend with his philosophy of minimalism. There were no frills or elaborate embroidery or gaudy colours. And yet Wendell’s creation were classics in elegance.
Wendell’s parents wanted to retire in Goa. Wendell made Goa his home and set up his studio down a lane of Campal promenade. Wendell bought the old Portuguese villa next to where his parents used to stay and was in the process or of converting it into a costume museum. The first of its kind in the world. Perhaps Wendell had an inkling as he retired from active designing and handed over to a young protégée. Wendell also was an activist who was a founder member of an environmental foundation. He was very possessive of his village Colvale and even wrote to the Prime Minister to save a 100 years old tree and chapel in the village which was sought to be demolished to expand the highway.
Besides writing a history of costumes Wendell showed his concern for the underprivileged with his book Poskem. Poskem was about children born out of wedlock or adopted by village bhatkars. They were virtually slaves who worked for the landlords for free of charge and were exploited by them. In the death of Wendell Rodricks, who was a first gay artist awarded with a Padmshree, India and Goa has lost one of its greatest ambassadors of the Goan way of life.

I TAKE exception to Chief Minister Pramod Sawant’s reaction to Aam Aadmi Party’s sweeping victory in Delhi. CM should first learn to appreciate good in others. Sawant says that freebies given to Delhi people gave victory to AAP but what about Delhi’s dirty air? CM should retrospect about his mismanagement of state finances and the severe structures passed by CAG against BJP government as it has been ruling the state since the past eight years. Everyone knows that this government is allowing coal pollution, rampant hill cutting, agricultural land fillings, Mandovi river pollution by casinos. BJP’s track record on environment comes on the poor list. Dilip Buildcon and other contractors have been allowed to degrade air quality on daily basis. So with what right is the CM talking about air pollution in Delhi? Both CM and Leader of Opposition cannot digest the success of AAP and the decimation of their parties in Delhi!
— Pradeep Padgaonkar, AAP, Goa
BJP GOVERNMENT STORY!
AN Indian MP gets: Daily allowance of 2,000; office expense allowance of45K pm; free travel by air and train; free accommodation; free 40,000 kilolitre of water and 50,000 units of electricity. But common man getting fee water and electricity is freebie for them???
— Nirmala Tai Halwewali, courtesy FB social media

CONGRATS, DELHI
The PEOPLE OF Delhi should be congratulated for out rightly rejecting issues like Muslims, Kashmir, Ram Mandir, Shaheen Bagh, Pakistan, etc, and giving more importance to real issues like development, education, healthcare, etc, and wisely voting for Arvind Kejriwal-led AAP team for a third consecutive time with a thumping majority in the recently held Assembly elections in Delhi.
The people of Delhi have just chosen a decent, humble, rounded, educated, no-dramatic, non-manipulative, non-hate spreading, civilized, soft spoken, simple, close knit family man who is religious and respects others too, and whose governance speaks more for him.
We need people like Kejriwal all over the country! I think the voters of Delhi have truly shown they are not a bunch of bullies by rejecting the communal politics of the BJP but civilized, sensitive people, and voted wisely for AAP’s performance in the last five years. They have also shown the BJP leaders that you cannot buy the ownership rights of this country to promote supremacy of the religious rights of any community. India is the sacred home of all free-born civilized human beings belonging to different religions. Hope the people of our other states too learn a few lessons from the voters of Delhi.
— Jerry Fernandes, Saligao

DONA PAULA CONGESTION
I FULLY understand the feelings and suffering of pollution and smell and noise at the CoP jetty which is just adjacent to my friend Dr Joe’s residence in Panaji. Whenever I visit him he is reading or lying down with all windows closed, when this casino construction work at jetty is going on. Poor fellow, he cannot open his windows for fresh air. He always asks me to go to court!
My problem at Dona Paula circle is this eight-floors building coming up on barely 4.5 metre front road. Although CCP Commissioner Sanjit Rodrigues issued a letter to PDA nothing has happened and work continues full swing. Who authorized such a huge project in residential area and that too with swimming pool within 450 sqmts area?
Another blunder is coming up in the name of development. I have been witnessing a contractor taking up work for footpath construction having near NIO colony side of five to six meters dimension at Booth Bungalow. I’m sure the area falls under Taleigao Panchayat and this footpath is being developed for parking tourism vehicles, this will cause further traffic congestion chaos for NIO staff or colony, plus students of Our Lady of Rosary School who are nearby. There are no approval boards and the situation will worsen, I am sure a road is being developed from White House through retaining wall on sea view side and going towards Nelson Cabral restaurant, touching the narrow portion of Dona Paula highway.
Before heavy congestation happen hope the authorities take stock of the situation otherwise later on there will be no solutions to suffering. I am told no permission was taken either NIO administration or Our Lady of Rosary School. Is this development?
Finally, I told Dr Joe that I can’t afford to go to court as he did for CoP jetty, because of my age and time and expenses limitations.
—Stephen Dias, Senior Citizen, Dona Paula