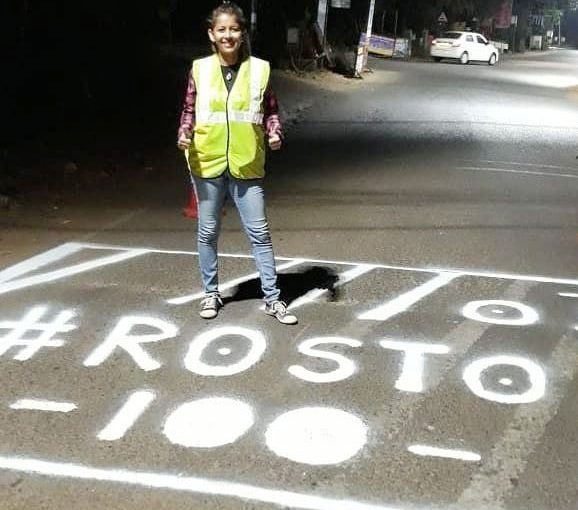 WORK: Kejriwal has proved that kaam-ka-politics works. If the government of Goa does not work let citizens follow the example of Rosto which has painted a hundred speed breakers so that accidents may be prevented

The Delhi elections are a landmark elections. Arvind Kejriwal has proved that parties can win elections on performance and not on hate and abuse. So will the parties in Goa stop abusing each other and get down to doing some work. A group of ordinary women whitewashed over 100 speed breakers in a month. If the government does not work can we follow the example of Rosto….

POLITICS means competition between one or more political parties to form the government in a democratic country. In the largest democratic countries there are only two or three parties. In the UK historically you had the Tories and the Labour party. Unlike the BJP in India, though the Tories are a right wing party they are not communal or fanatical.
In the US you have the Democratic party which is considered liberal and secular and Donald Trump represents the Republican party which is at least as fanatical as Narendra Mod’s BJP. If Narendra Modi hates Muslims, Donald Trump hates migrants. Like the great wall of China, Donald Trump has built a huge wall separating neighbouring Mexico from the US. Besides stopping the migrants from Mexico, Trump also wants to crack down on the drug trade, as Mexico is one of the biggest drug peddlers to the US.
Many European Nations like Germany and France have more than two parties and the government is a coalition of several parties. What is disturbing is that in many countries in the world the far right meaning parties like the Nazis which are the model for the BJP and the RSS are gaining strength. Part of the problem is that the refugees to European countries, the UK and US, include ISI operatives who have brought a rare violence with them. There have been bombings, shootings even in France which is considered the most liberal country after the country’s most famous cartoon magazine carried some images of Prophet Mohammad.
Governance as distinct from politics is about roti, kapda and makan. It is about how good the water supply and the power systems are. It requires roads and bridges which are of the highest quality and zero accidents take place. In the UK and US there are highways on which the minimum speed is 250 per km. This enables citizens to work in cities like New York and live in the suburbs which may be more than 200 km away. If there is an accident on a highway a helicopter is at the spot within five minutes to take the injured to the hospital.
Forget about England, even the Gulf countries have the best governance even though they may not enjoy freedom.

THE recently concluded elections in the national capital New Delhi have brought about a dramatic shift from the politics of confrontation to the politics of governance. This is probably the first time in the country when a political party has won elections on the basis of its performance. In the normal course political parties promise the sun, moon and stars to voters if they are elected to power.
For instance in 2017 both the Congress and the BJP promised that they will build state-of-the-art bridges and roads; install modern waste management systems and above all promote Make in India initiatives to create employment. None of these promises have been carried out. Worst still the option of migrating to the UK on a Portuguese passport has also disappeared following the UK leaving the European Economic Community on January 31, 2020. The Gulf countries too are encouraging their locals to take up white collared jobs and even the salaries for purely manual jobs have down sharply.
Arvind Kejriwal did not have unlimited amounts of money to fight the election. Kejriwal did not have the unlimited resources that the BJP had. This was an instance of a state with a population of just two crore taking on a party which had control over a country with a population of 150 crore. The BJP could do any mischief it wanted because the police force and all the enforcement agencies were with them. In retrospect it would appear that Shaheen Bagh was a trap set up for Arvind Kejriwal. If Kejriwal had got involved in the agitation they would have called him a terrorist and arrested him. But Kejriwal was clever enough to stay out. On the contrary whenever he was taunted and threatened by the BJP leaders, he even went to the extent of saying that his supporters should be shot, he pointed out that since the BJP had the police with them they could remove people obstructing roads as in the case of Shaheen Bagh any time they wanted.

NO TO CAA AFTER POLL

Even on the subject of the Citizens Amendment Act Kejriwal waited till he was elected and sworn in as chief minister before he declared he was totally against the CAA and the NPR. Till two years ago Kejriwal could do little by way of reform as being a Union territory the Lt Governor was the boss and though his was an elected government holding 67 of the 70 seats, he could not do anything without clearing permission. Fortunately, the Supreme Court ruled that as an elected government the Aam Aadmi party and Arvind Kejriwal had ultimate power in the state of Delhi.
Kejriwal was quick to demonstrate the difference between politics and governance. Or at least demonstrate a new kind of politics. The politics of getting things done for the people. It sounds better in Hindi. Kejriwal made a distinction between “kaam ki rajnithi” and “nafrat ki rahnithi.” The difference between the politics of work and the politics of hate. All politics is about blaming each other. For the first time Kejriwal demonstrated that you could win an election on performance alone without blaming anybody.
SINCE 1947 when India became an independent country the capital of Delhi lacked proper streamlined roads. The capital of Delhi had not sanitation systems in place. India’s capital city had no community-centric free clinics and hospitals for the poorest of the poor. The government schools in the national capital were as bad as the worst government schools in Bihar and other backward parts of the country. Rich and poor had to pay the same power charges. There was a desperate shortage of drinking water. The capital city of India should have been a model city since it was the seat of the central government. Nothing got done because of the politics of hate.
Kejriwal dramatized that anything is possible with “the rajnithi (politics) of kaam.” So the people of Delhi irrespective of caste, community or creed, once again gave him 62 out of 70 seats in the Legislative Assembly. This despite Narendra Modi addressing rallies and Amit Shah begging for votes from door-to-door, the BJP could get only seven seats out of the 70. The BJP’s attempts at polarising Delhi along communal lines did not work. Both Muslims and Hindus voted for AAP. Not because of any love for Arvind Kejriwal. Or because they hated Narendra Modi and Amit Shah. But because they had the evidence of good public work before them. Kejriwal delivered on his promises.

DELHI has a population of two crore. Most are migrants from other states. In contrast, Goa is a population of just about 15 lakh. Surely in a small state like this it should not be difficult to build roads without potholes? Surely it should not take five years to build the South Goa District Hospital. Surely our primary health centers like the mohalla clinics in Delhi should be able to provide the best medical care? Surely the government of Goa can take steps to protect women? May be the Goa government cannot afford to give free bus tickets to women commuters but surely it can in public private partnership build a metro? Or at least extend the Konkan railway to all Goa’s major towns and create a much needed suburban railway network to benefit locals as well as tourists. Surely the Goa government can set up a proper drainage system so that the roads do not get flooded during the monsoons. Surely the state government can encourage industry to set up business in Goa so that jobs can be created. Surely it can create educational institutions like aeronautical engineering institutes for preparing Goans for jobs when the Mopa airport is commissioned.
Instead, Chief Minister Pramod Sawant does stupid things like declaring Section 144 during Carnival time which is one of the highlights of the tourism calendar in Goa. Out of fear that there would be protests against the CAA! Apparently the CM is under the impression that the growing population of Muslims in Goa is in favour of CAA and NPR because they have not protested against them. The truth is that either Muslims have no guts or living in Goa they have become sussegad as Goans. Let all Goans swear that in the next election they will only vote for parties on the basis of performance and not on the basis of broken promises.