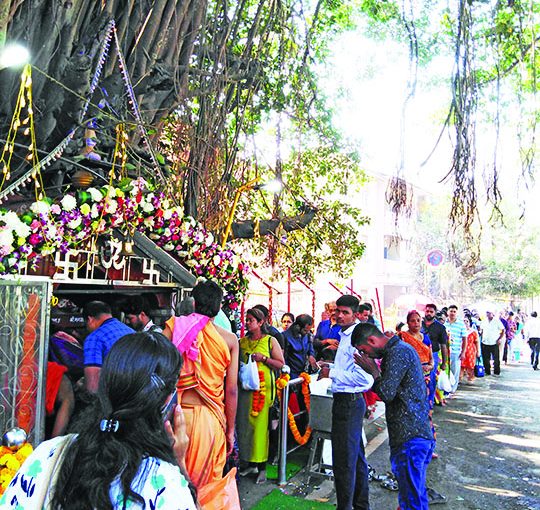 Friday, Feb21 was Mahashivratri: Many Goan Hindus got up bright and early to seek the blessings of mahadeo at the nearest shrine – be it at this shrine tucked inside a grand banyan tree at Taad-Maad, St Inez. Worshippers started queuing up from 6am and by 9am it was a long, long queue which moved at tortoise pace! Offerings of water, milk, bael leaves and parijat flowers, shriphal (coconut), incense sticks…were all offered to Hinduism’s “Lord of Destruction” Lord Shiva. Mahashivratri is celebrated in the dark fortnight of Krishna Paksha on the 13th night/14th day of Maagha or Phalguna month (February/March by the English calendar). (Pic by Pankajbala R Patel)

THE visit of the Portugal president to Goa ended up with the signing of a number of MOUs. Portugal has a rich history in seafaring and shipbuilding and the MOU with Goa Shipyard taps this. Goa’s various shipyards in operation owe their current operations to the Portugal legacy.
But manganese above MDH guidelines ends up in kidneys, bones, pancreas, liver, etc. Mn in bones cuts short life by nine years! Bronchitis and Parkinson’s disease are also said to be due to high Mn absorption. Mn removal has been hanging fire since the last so many decades. Money is splurged on tourism and mining dependents but we continue to ingest harmful Mn.
The well-off including politicians who best know the drawbacks of current treatment technologies, have resorted to packaged drinking water but the same is contaminated with microplastics. They use reverse osmosis home treatment gadgets but these remove essential minerals which leads to other deficiencies!
All wells in Goa have been allowed to be contaminated by builders and businessmen. All work undertaken by the government is for businessmen! Now the best and only solution is to remove Mn at Selaulim and Opa waterworks. But priorities lie elsewhere. If you want to buy ice-cream would you go to a pharmacy?
What is required is an assessment of the Selaulim and Opa water treatment plants and a study undertaken for removal of manganese from water reservoirs.
Portugal does not have manganese removal technology. Note, Portugal water supply does not comply with EU guidelines on drinking water including manganese in water. A contract paid for by the Goa government will definitely help Portugal to learn how to treat their own water sources. Goa is well known for giving others at its own cost. This is why everyone makes a beeline to Goa: not because they do not like to work! Our politicians know only how to extend hospitality whether it is immigrants or north Indians pretending to be government VIPs or Chinese delegation!
— R Fernandes, Margao

NO STATE FUNERAL FOR WENDELL!
OUR very celebrated late Wendell Rodricks was a proud recipient of the Padmashri Award in 2014. It is the fourth highest civilian award in our country and yet the Goa government chose not to honor the accomplished Goan with a state funeral. In a rank breach of protocol it was very sad and unfortunate that even a great Goan of rare talent was not honored. The government displayed complete disregard of the work of Wendell despite his achievements being recognized with a Padmashri. Chief Minister Pramod Sawant owes an apology to Wendell’s family and people for the sheer disrespect shown to him by not even deputing a high level government representative to be present at the final journey of the internationally famous fashion designer. Not being accorded a State funeral does not diminish Wendell Rodricks contribution to the state and country but it has exposed the insensitivity and moral incompetence of the Goa government.
— Aires Rodrigues, Ribandar

PARKING RIP-OFF
How dare the CCP impose such a mercenary parking scheme on Ponjekars! The CCP’s new parking scheme which has commenced recently is a rip-off and a scam. It is because there is no proper transportation in the city that most of us are forced to take our own vehicles to commute between home and office, and to charge Rs20 per hour is incredible extortionate. First give us public friendly transport system and then make us pay for parking. Day by day the public transportation system is getting shabbier and now the CCP wants to impose parking fees so that they may be the benefactors instead of the public. This CCP is working along with the Transport Department to further make the life of the public miserable.
— Sunanda Gaonkar, Panaji

CM SHOULD RESIGN!
THE BJP’s betrayal of Goa on the Mhadei river issue is now out in the open and the Chief Minister of Goa Pramod Sawant should resign. At every stage in the fight to protect Goa’s interests over Mhadei water rights, the BJP which has been uninterruptedly in power in Goa has betrayed Goa’s vital cause. In the light of Supreme Court order allowing Karnataka’s plea to direct the Centre to notify the tribunal water distribution award it is clear that Goa has lost and has never had a government like the present one that places party interests above that of the state. The weak presentation before the Supreme Court of Goa’s case, the unwarranted letter to Yediyurappa of Karnataka by the late CM Parrikar and targeting of people who raising their voices for Mhadei river rights are several instances of betrayal by this government. Not only today’s generation but generations to come will not forgive this government and the chief minister should resign.
— Valmiki Naik, Aam Aadmi Party, Panaji