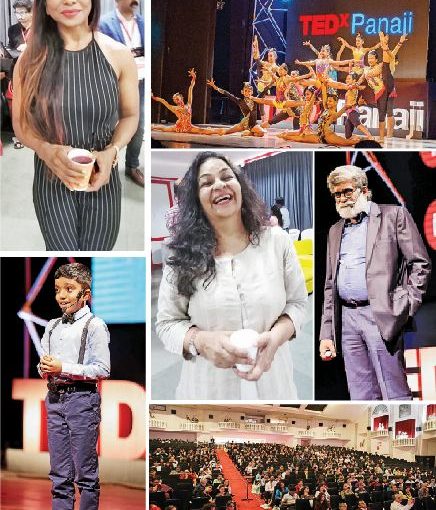 HONESTLY, there’s no dearth of ideas and inspiration to do a makeover in one’s life nowadays. All you have to do is attend one of the 400 odd TEDx shows around the world as franchisee events and come away with a bagful of ideas of how so and so and so and so grew up as a nobody but became a somebody through sheer grit, determination, lots of hard work and frustrations…above all perseverance. This is to say there were several remarkable stories recounted at the fourth edition of the TEDxPanaji presentation on Sunday, March 8, 2020, at the Kala Academy auditorium.

The TEDx shows invite a lot of attention and a lot of painstaking work goes into I am sure, some of the motivational speakers were from Goa but several from out of Goa. Funny how everyone says money is no solution to happiness but it is certainly a stepping stone to it, quite of contradictory no? I couldn’t stay for the whole show for it dragged on into the late evening although speakers were to speak no more than 18 minutes each…speakers after my own heart were cancer survivor Ruby Ahluwalia, a bureaucrat from Uttarakhand who spoke of her organization Sanjiveeni, who spoke of how every battle with cancer leaves the patient so exhausted, “but I’ve come out of it…free from cancer now.” Her journey with breast cancer was tough but she has been in remission or cancer free for the last ten years and life has become rewarding helping other cancer-stricken patients with Sanjiveeni. There are Sanjiveeni branches in 14 cities, 10 states, “we offer jobs to two lakh people!”
To be free from cancer, she stressed, it is important to live healthy, minimize the “toxicity of a system we generate from inside us.” It’s a combo of things which gets us sooner or later…the water we drink, the food we eat (“which is not fresh, seasonal, raw, free of chemicals, preservatives, artificial flavors”), then the air we breathe, the kind of lifestyle we live, all add up and count. Ruby pertinently noted that “Our relationship with the environment is downright abusive!”
We have a tendency to overeat and all the “layers of undigested food create acidity and toxicity” – also, she advised everyone to alkalize their system and oxygen is the biggest alkalizer, there is no toxicity where there is oxygen, oxygen kills toxicity, “so breathe well.” She said, most times in emergency situations most of us are faced with fight or flee situations and fear determines this. Sanjiveeni helps cancer patients with information, making connections, “one patient we had was suicidal, we got her over her fears…and finally when she was cancer free she came and said, `Now I feel like dancing all the time!’” Cancer patients must know about right food, right time, right mental state to turn a negative narrative into a positive narrative…no, nobody said it is easy, but even in futile cases Sanjiveeni can help with such things as what to do to reduce pain and many other things. From the sound of it, if you’ve got cancer and are feeling defeated you can do with some timely Sanjiveeni help. Is there a Sanjiveeni in Goa, I forgot to find out.
The other person who stays in memory is Karishma Parker, dentist extraordinary who took to bodybuilding and won gold several times, to finally catch up with being somebody (from being a nobody, her words). I think it is Karishma’s story which touches me the most. How as a young girl her parents supported her to be an achiever but feelings of inadequacy dogged her, plus a failed marriage and a child to raise, “it was a rigid marriage there was no growth, no common grounds… my marriage fell apart and I walked out with my child.”
She had had enough of feeling like a nobody, she joined dance classes but the partner she got refused to dance with her! It was rock-bottom state of mind but she came out of it once she joined a gym and fell for weight-lifting and bodybuilding! She asked the best coach in India, Asad Hussain, to train her and he agreed…soon came Instagram postings, the gold medals, and the feeling that she is somebody!
Today you’d never think Karishma Parkar suffered from so much inferiority and is in a class of her own now, she comes across as someone who has found her world. Later on, speaking to her, she advised young women not to be afraid of doing weightlifting or bodybuilding, “It’s certainly one way to lose weight if that’s what your goal.” Really, I feel like meeting up with Karishma anew.
The other TEDxPanaji speakers who linger in memory are the 10-years-old Saipranav Gandhi, a robots-crazy prodigy; and one of these days I must catch up with Dr Rajah Vijay Kumar, medical equipment inventor extraordinary with something like 32 inventions to his credit. The soft-spoken Dr Rajah had the audience spellbound, what a journey of life he has lived and his latest offering is an USFDA-approved breakthrough cancer treatment device called Cytotron. Read up all about it, my dears.
By this time I was feeling quite satiated with all the aspirational true life stories! There were performances in between the talks and utterly enthralling was Dr Varsha Upadhyay’s presentation of a rhythmic gymnastics performance featuring her “23 daughters.” That is her troupe of mostly young teenage dancers and one learned that rhythmic gymnastics, a combination of Russian ballet with gymnastic moves incorporated into it, is an Olympic “female-only” recognized sport. Rhythmic gymnastics, says Dr Upadhyay, is great for young girls to build up their stamina and confidence. Thanks to Varsha Upadhyay’s efforts – she is the country’s first female coach to judge international sporting events – rhythmic gymnastics is going places in India.
All this and much more, it was time for me to leave on a note of avjo, selamat datang, poiteverem, au revoir, arrivedecci and vachun yetta for now! By the way, in case you don’t know, these TED aspirational presentations originate from TED Conferences LLC — as in Technology, Entertainment, Designs, an American media organization which posts all TED shows online for free distribution under the slogan “ideas worth spreading.”
The parental organization is owned by Chris Anderson, a British-American businessman, through the Sapling Foundation. The main TED event is held in Vancouver, British Columbia annually, there are franchisee shows the world over now like TEDxPanaji which is curated by Dattaprasad Shetkar. He’s a familiar name in Goa!