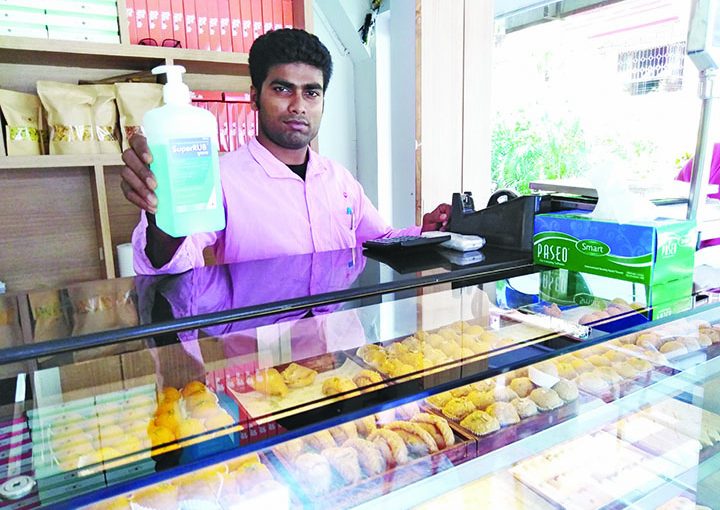 MADAM, PLEASE USE HAND SANITIZER! This is Amit Kumar Haldar of ‘The Rasoda’ sweetmeat outlet at St Inez, Panaji. We asked what steps have you taken to combat novel coranavirus? He replied, use sanitizer before and after treating ourselves to their delicacies of boondi ladoo, aate ke ladoo, moong ladoo, gond ladoo, other ladoo, gulab jamun, rossogolla….or chole-bhature/samosa-chaat/fafda laced with mint/tamarind chutneys. Terribly pricy though! They are not open on Sunday, please note. (Pic by Tara Narayan)

CONGRATULATIONS to Dr Pramod Sawant on his successful completion of one year as chief minister of Goa. He has believed in himself and charted his own path. My friend and Metro Editor at TOI, Vijay de Souza, has correctly analysed the year of performance. I would only differ with one view: Dr Pramod Sawant who I know as a person, businessman, an MLA, the Speaker of Goa Assembly and chief minister of Goa is “simple, approachable, accessible and one who is willing to take suggestions.”
It not an image of him cultivated by the BJP. He is a study in contrast with his “know all” predecessor who also became arrogant and vindictive after 2002 by surrounding himself with sycophants…who are still afraid of his shadow. Some of my friends may not like it, but I personally believe that Pramod Sawant will be the CM till the end of the current Assembly in March 2022.
The future depends on the numbers and not his performance alone. My best wishes are with him for a better Goa, organic and garbage free is a common dream we need to work on.
— Miguel Braganza, Mapusa (courtesy social media)

COVID-19 PANIC?
WITH panic and clamor regarding Covid-19 escalating the world over it is very unfortunate that educational institutions in Goa are holding the exams for Std IX, when all the other exams are cancelled or postponed. This is against the guidelines given even by the World Health Organisation. How can the government and Education Department give guarantee and assurance that the students are safe as will not come in contact with other students and other people who may be potential carriers of this deadly virus?
Most students will travel by buses and other modes of transport, this can be very dangerous. Are the exams of Std IX held to safeguard the reputation of the schools? Life is more important than the exams. It is high time the concerned authorities realized the severity of a grim situation and either cancel or postpone the exams, giving reprieve to the students and parents.
— Agnelo Pires, Panaji
LAW MAKERS ARE LAW BREAKERS!
WITH reference to local dailies dated March 17, 2020, reporting that a PIL has been filed by Devika Sequeira, she has guts to expose Manohar Parrikar samadhi coming up at the crematorium venue on No Development Zone at Miramar beach. She has challenged the HTL which is not yet demarcated and demanded the concerned authorities to look at it.
The irony is that it is as if Manohar Parrikar hinself would not approve of his samadhi being constructed at Miramar beach, since it was his own government’s One Man Committee (OMC) on the Miramar beach privatisation, prepared and compiled by Dr Nandkumar Kamat, an eminent environmentalist and widely accepted authority.
Another important aspect is the government is a custodian of the Public Trust Doctrine, which envisages that the interests of the people have to be protected by the Government and thus it is a question of the government not adhering to its responsibility towards the people in protecting public places.
Other environmentalists/scientists who care enough should come out openly with their expertise in the matter of construction of this samadhi. It is at least the duty of the High Court of Bombay in Goa to stay the construction of the samadhi.
— Stephen Dias, Panaji

STATUE POLITICS
A GROUP of Mapusa residents have recently submitted to the Municipal chief officer a memorandum objecting to the erection of a proposed bigger statue of Shivaji from the present one near the Lohia Garden in Mapusa. Unfortunately, a complaint has now been lodged by an individual from a political party at the Mapusa Police Station against these same locals for daringly questioning the motive behind the erection of this particular statue of Shivaji near Lohia Garden at Mapusa.
The complainant has claimed that by objecting to the erection of the said Shivaji statue, the above mentioned group from Mapusa have hurt the sentiments of not just his followers but all Hindus in Goa. Now, why is the complainant dragging Hindus into this matter and trying to give a communal twist to the issue?
As per historical facts Chhatrapati Shivaji was a famous Maratha ruler from Maharashtra who respected people of all religions and he had numerous Muslim soldiers in his army. His only aim was to overthrow Mughal rule, establish a Maratha empire, and due to this is considered a big hero in Maharashtra where he remains arguably the greatest figure in the state’s history. Stories of his life form an integral part of the upbringing and identity of the Marathi people in Maharashtra to this day.
Unfortunately, despite knowing all this some pro-Maharashtrawadi symphathizers are aggressively making efforts to portray Shivaji as an anti-minority figure and somehow promote the might or “dadagiri” of just one community, by threatening the Goan minorities installing his numerous statues of different sizes in different parts of Goa.
The arguments raised by Mapusa locals are absolutely genuine. They have rightly demanded and said that if any statue is to be erected in a public place in Mapusa, then it should be of a Goan leader who is a son of the soil. If anyone is hell-bent on erecting a bigger statue of Shivaji it should be done on private property. Is it a crime to expose the real agenda of pro-Maharashtrawadi supporters from Goa?
Some pro-Maharastrawadi symphathizers are hell-bent on decorating Goa with giant statues of Shivaji everywhere to glorify him and somehow show that Goa was and is a part of Maharashtra!

DARK DAYS
THE nomination to the Rajya Sabha of the recently retired former Chief Justice of India Ranjan Gogoi is yet another very dark day for India’s Judiciary. With the BJP wanting to overpower the Judiciary, there is a very disturbing disquiet over the slippery slope on which judicial values are sadly slithering.
We all saw how then Chief Justice of India P Sathasivam who within weeks of his retirement was rewarded by Prime Minister Narendra Modi with an appointment on August 31, 2014 with post of Governor of Kerala. We will soon know what reward Supreme Judge Arun Mishra who retires this September 22 is bestowed for having recently gone well overboard in publicly eulogizing Narendra Modi!
Judiciary should never be manned by persons who are tilted or aligned to any political party. Judges should have the spine to crack on illegalities done by all politicians, regardless of how high positions they hold. It has to be ensured that judicial accountability is maintained at all times with every Judge conforming to the highest standards of uprightness and integrity.
The Constitution of India is very clear on the distinct roles of the Executive, Legislature and Judiciary. It envisages a free, fair and independent Judiciary. To ensure the highest standards of judicial independence at all times and to ward off even the faintest trace of governmental influence on the judiciary, there needs to be at least a two year “cooling off period” for retiring judges before they accept any post retirement position.
— Aires Rodrigues, Ribandar