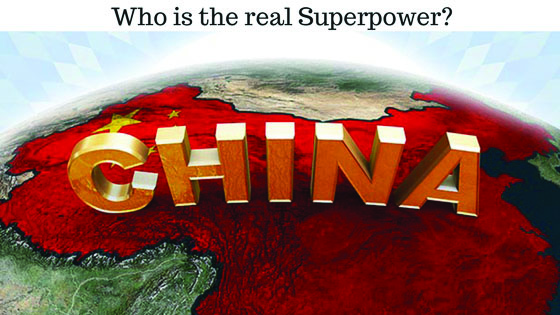 This China story making WhatsApp rounds anonymously is worth thinking over and coming to some conclusions good, bad or terribly ugly…

Scene I:
The curtain opens: China becomes ill, enters a “crisis” and paralyzes its trade. The curtain loses.

Scene II:
The curtain opens: the Chinese currency is devalued. They do not do anything. The curtain loses.

Scene III:
The curtain opens: Due to the lack of trade of companies from Europe and the USA that are based in China, their shares fall 40% of their value.

Scene IV:
The curtain opens: The world is ill, China buys 30% of the shares of companies in Europe and the US at a very low price. The curtain closes.

Scene V:
The curtain opens: China has controlled the disease and owns companies in Europe and the US and it decides that these companies stay in China and earn $20,000 billion. The curtain closes. How is the play called? Well played, China?

Scene VI:
Checkmate!
And observation…
“It’s amazing but true. Two videos have passed and convinced me of something I suspected, but had no basis. It was just my speculation. Now I am convinced that the coronavirus was purposely propagated by the Chinese themselves.
At first they were too prepared. Three weeks after the start of the roll, 14 days and a 12,000 bed hospital was already under construction. They really build them in two weeks.
Awesome! Soon they announced that they had stopped the epidemic. They appear in videos celebrating, they announce that they even have a vaccine. How could they create it so quickly without having all the genetic information? Well, if you are the owner of the formula it is not difficult to at all.
And I saw a video that explains how Den Xiao Ping gave the west a half stick. Due to the coronavirus, the actions of Western companies in China fell dramatically. China I just hope, when they went down enough they bought them. Now the companies created by the USA and Europe in China with all the technology put in by these exchanges and their capital they passed into the hands of China, which is now rising with all the technological potential and will be able to set prices at will to sell everything they need to the West. How are you?
“None of this could have happened by chance. China who cared that few old mend died? Fewer old age pensions to pay, but the loot has been huge. And right now the West is financially defeated, in crisis and stunned by the disease and without knowing what to do. Masterfully diabolic. It had to be the Communists. Adding to this, they are now the single largest owners of US treasury with 1.18 trillion holding surpassing Japan.
“Other questions worth pondering over for a few shocking answers: How come Russia and North Korea have low or zero incidence of Covid-19? Is it because they are staunch allies of China? On the other hand USA/South Korea/United Kingdom/France/Italy/Spain and Asia are severely hit.
How come Wuhan is suddenly free from the deadly virus? China says that the drastic initial measures that they took were very stern and Wuhan was locked down to contain the spread to other areas. Why Beijing was not hit? Why only Wuhan? Well, Wuhan is open for business now. Covid-19 needs to be seen in the backdrop of the arm twisting of China by USA in the trade war.
“America and all the above mentioned countries are devastated financially. Soon American economy will collapse as planned by China. China knows it cannot defeat America militarily as USA is at present the most powerful country in the world.
“So use the virus to cripple the economy and paralyse the nation and its defence capabilities. I am sure Nancy Pelosi got a part in this…to topple Trump. Lately President Trump has always been telling of how the great American economy as improving on all fronts and jobs were coming back to the USA. The only way to destroy his vision of making America great again is to create economic havoc. Nancy Pelosi was unable to bring down Trump through impeachment…so worked along with China to destroy Trump by releasing a virus.
“Wuhan’s epidemic was a showcase. At the peak of the virus epidemic China’s President Zi Jinping just wore a simple RM1 face mask to visit those affected areas. As president he should have been covered from head to toe but that was not the case. He was already injected to resist any harm from the virus. That means a cure was already in place before the virus was released.
“China’s vision is to control the world’s economy by buying up stocks now from countries facing the brink of severe economic collapse. Later China will announce that their medical researchers have found a cure to destroy the virus.
“Now China shall own the stocks of all Western alliances and these countries will soon be slave to their new master – China!”