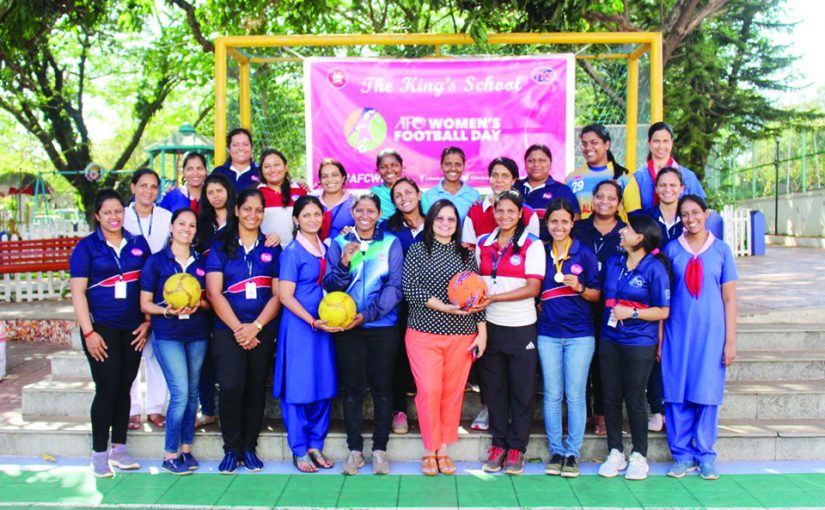 It was the first ever AFC Women’s Football Day at the King’s School and an exciting success with 109 women participating in the event which kicked off on March 11, 2020. From tiny tots to young women kicked a football around in the tournament games to win lots of medals. The event marks a serious promotion of women’s football…all including Director Ligia Pereira of King’s School take a bow!

I LOOK forward to a coherent plan from Chief Minister Dr Pramod Sawant as promised! Either roll out a system for home delivery of groceries or keep grocery stores open as is being done in every other state in the country. If stores are to be open consider the compelling logic, lesser the stores and shopping time, more the chances of bigger crowds, more the chances of coronavirus transmission. So grocery stores must be open all day daily and some 24×7 if possible. The only limit that can be imposed is number of people in the store at a time. This is the only solution to allow citizens to get their daily essentials without overcrowding.
— Valmiki Naik, Aam Aadmi Party,Goa

CORONAVIRUS OBSERVATIONS
I PASS Sao Paulo at Taleigao market often, especially when I don’t want to go to the crowded Panjim market. Recently, a new Innova vehicle with a registration number plate of High Court Bombay in Goa stopped there and two of the four occupants got down and went to check the shops which were open, but not to buy anything. I observed this carefully because the market was completely open.
I thought they were inspecting the city and found most of the shops in Panjim closed but not Taleigao. Also, I think the occupants seated in this vehicle were judges or higher officials of Goa Administration. Earlier I saw police and they were not wearing masks.Then we heard that the lockdown would continue.
I called Minister for Civil Supplies Govind Gaude who assured me that essential commodities, even including fish, would be available and a circular issued. He listened to my suggestions about police not gathering in large numbers without masks as they are supposed to give a good example. But after PM’s announcement of 21 day lockdown our CM Pramod Sawant did his job to ensure the lockdown is successful.
On March 25 morning a police jeep was parked at Taleigao market with one person and siren on continuously. I appreciate the police’s strict action in making this lockdown successful. Police did their work well by standing in places where the chances of breaking the lockdown was there. I was happy that they came with minimum number of police personnel to give the crowd a good example they did not gather in large numbers and wore masks. This probably has been advised by Mr Gaude who had said he would inform DGP and Chief Secretary to do the needful which was being done.
However, not everything is perfect! The PM had assured us that essential services like milk, food, bread and petrol would be available. Most of the pharmacies except Wellness in St Inez and Apollo as well as 24 hour chemist shops remained closed. Shops, fish market, tea-shops, restaurants, observed the lockdown, were closed. The main milk stores opposite Pharmacy College received a stock of milk but police spoke to him and he shut his shutters, disappointing the huge line standing in queue upto the petrol pump near Mother Theresa’s home. It may have opened after I left!
— Stephen Dias, Dona Paula

DID GMC GOOF UP ON GOA’S FIRST COVID-19 POSITIVE CASE?
The tale of one of the three Goans who yesterday tested positive for COVID-19 is mind-boggling. The Texas based Goan who is originally from Saligao arrived in Goa last week via Bombay and was staying in Panaji. His home quarantine was not monitored by the authorities.
After a few days on feeling unwell he reportedly admitted himself at the Goa Medical College in Bambolim and was quarantined. He was discharged yesterday morning.
When the test results arrived yesterday evening finding him positive the authorities went berserk and asked the gentleman to come immediately to the Goa Medical College. So the gentleman was driven to the GMC by a close relative and is now quarantined at the ESI hospital in Margao.
After the gentleman arrived in Goa last week from the United States he was exposed to a lot of his friends and relatives including his elderly in-laws. He has reportedly moved around a lot.
So there needs to be a probe as to how he was discharged yesterday morning without the test results having arrived. While in quarantine at the GMC how was he allowed to walk to the pharmacy to buy sachets of Electral to treat his dehydration. And last evening after he was tested positive why did an ambulance not rush to fetch him instead of asking him to report to the GMC.
The Government needs to seriously look into all these unpardonable grave lapses. There should be no attempt whatsoever to cover up. God is watching this global crisis.
— Aires Rodrigues, Ribandar

LOCKDOWN WOES
THE state lockdown sees cops violating human rights by mercilessly beating scooterists. The videos are depicted on social media. In this respect mere transfer of the SI involved and the justification of his superiors that the scooter riders were earlier warned are all violations.
Did the victim violate any law? In another incident, a young boy was made to do sit-ups in front of a row of cops! This lockdown has made many beggars and homeless and in fasting or starvation situation. What about water, soap and social distancing? What chance do poorer people and senior citizens alone have? In 2017 Budget former CM Parrikar made provisions to make Goa beggar free and also provide shelters for the destitute. Why are these facilities not being made use of during the current lockdown?
Ironically, the government is now asking for CSR funds to tackle Covid-19! Where are the emergency/contingency funds? Have they been picked dry by our politicians? The GHRC-Goa Human rights Commission needs to ensure justice with exemplary pshment to all guilty.
—R Fernandes, Margao