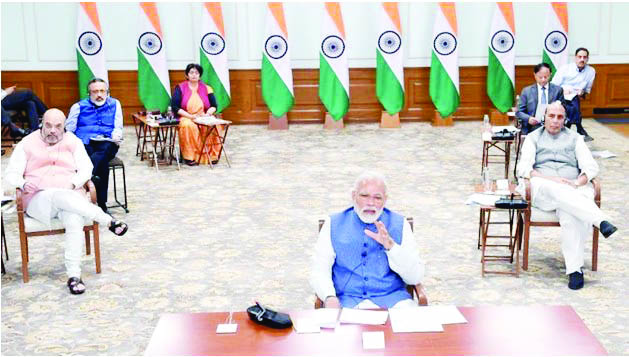 SOCIAL DISTANCE: The distance between the various BJP cabinet members is clear with Nirmala Sitaraman confined right to the back for the mess she made of the budget!

The government is contemplating a second lockdown across the nation after May 15 after the current one ends on April 14. This was one of the points discussed at a crucial 16-member Group of Ministers (GoM) meeting in April 3 chaired by Union defence minister Rajnath Singh and including Union home minister Amit Shah. A second lockdown is planned to break the chain of infections–the government believes it has only around 40 per cent of the critical care equipment needed to meet the pandemic. It hopes to delay the onset of the disease until the healthcare infrastructure can handle the surge in cases. India reported its largest single-day rise in the number of Covid-19 cases–505–on April 5, taking the total number to 3,577, with 83 deaths.
The Union government is likely to announce a conditional lifting of restrictions on April 15. Delivery of essential services will continue but the nationwide ban on public congregations will remain; cinema halls, food courts, restaurants and religious places too might stay shut. Malls will be open but only for selling essentials. Airline travel might resume, but visits to and from foreign countries will be permitted only under special circumstances. There will be special advisories to avoid inter-state travel. The ban on weekly markets will apply only to areas most affected by the Covid-19 outbreak.
None of these decisions has been taken yet, but these discussions at the GoM point to the way the government’s thinking. It is clear that the government, at the moment, does not have sufficient evidence to confidently claim life will return to normal from April 15. The duration of the May 15 lockdown will be decided based on the number of infections the spread of the disease by then.
Ministers sat at a safe distance from each other at the April 3 meeting, prompting one of them to say–”If the situation does not improve, further meetings might have to be conducted through video conferences from home.”
The meeting also discussed monitoring quarantined persons using GPS trackers, though it is not clear right not how this will be done, whether through smartphones or via a wearable device. Metro services will be restored in Delhi but with entry restricted only to office-goers, and after body scans.
Offices where work from home is possible will be requested to extend it for another month. A key concern of the government appears to be to keep hospitals free of crowding and daily patient traffic. Hence, doctor-on-call services will be considered for people suffering from common colds, colds, fever or other diseases. Coordination among the government and private hospitals will be evolved.
Admissions, classes and examinations in schools and colleges will be made online. Train services may be resumed, but only for essential travel. The states may follow the Union government model, with variations of their own.
Uttar Pradesh, India’s most populous state, is planning to lift the lockdown in stages. The Yogi Adityanath government is considering relaxing the lockdown with restrictions in districts where no Covid-19-positive case has been reported. These relaxations will gradually be extended to other districts at a later date.
Conducting a video conference with his ministers from his residence on April 5, Chief Minister Yogi sought suggestions from MPs and ministers to formulate a post-lockdown strategy. He feared crowds spilling out into the streets after the lockdown, defeating the purpose of preventing the spread of the infection. He said the government would take a decision on relaxations in the first phase as well as the organisations and institutions to be given exemption only after receiving the suggestions of public representatives. The CM said his government will continue to be alert on the situation and keep a constant tab on the situation. Making the public aware about social distancing and implementing it in public places would remain the first priority of his government, he added.
The Delhi government, meanwhile, has decided to keep malls, multiplexes and congested markets such as Chandni Chowk, Lajpat Nagar and Sarojini Nagar closed. Only shops selling essential goods will be allowed to remain open. No parties or gatherings will be allowed. Marriages, birthdays or any kind of celebration will not be permitted. Schools will remain closed, online classes will continue to run as they are at present. If the airport is opened up, every person exiting the premises will be fully screened. People will not be allowed to come out in the public without masks, either bought from a medical store or home-made or folded scarves or other pieces of cloth. Offices will be allowed resume functioning, but effort will be made to make them call minimal staff. At least half the staff can continue work from home. Delhi’s sanitisation plan, too, is also almost ready before the end of lockdown. Covid-19 hotspots like Nizamuddin and Dilshad Garden will continue to be under lockdown.
ICMR has advised the Centre to conduct rapid tests in hotspot areas. It is yet to be decided whether such tests have to be conducted on each and every person or randomly; a guideline from the Centre is awaited. Delhi health minister Satyendra Jain says though hospitals in Delhi are already fully prepared, a specific plan is being worked out. Talks have been held over fundamental issues such as creating a separate flu ward in all private hospitals. There will be a separate gate for the entry and exit of any kind of flu patient and his caregivers. Though some hospitals already have such arrangements, it has to be ensured in other hospitals before the lockdown is lifted. Doctors and medical staff attending flu patients will not go to OPDs or other wards. Providing them full safety equipment will continue to be priority. Some private hospitals are running online consultation centres and have also released mobile apps which may be used to request delivery of medicines. Samples may also be collected from home. Talks are on to instruct clinics without such facilities to gear up for them.