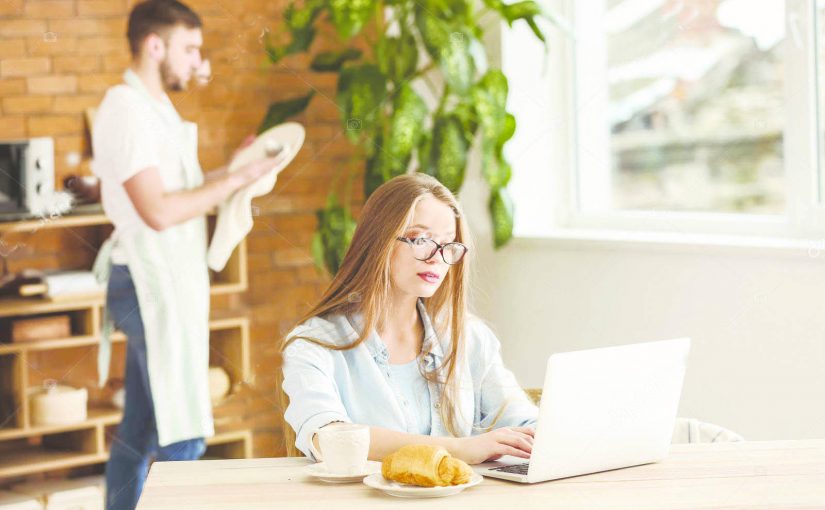 MULTI TASKING: Men have to wield the broom while mummy is balancing accounts on her computer

Staying at home is no solution to coronavirus. You cannot make cars and consumer durables on computers. The coronavirus pandemic if it continues will change the way we live and behave……

To an economy passing through demand depression and high unemployment, the lockdown would add supply-side stress, accelerating the slowdown further and jeopardising the economic wellbeing of millions It does not require an economist to tell that a complete social and economic lockdown of India for 21 days would severely impact the supply side of the economy, that is, production and distribution of goods and services, except for the essential items that are exempt.
In an economy already reeling under a demand depression, rising unemployment, and lowering of industrial output and profits, all of which happening together for several quarters now, a supply-side constraint would deliver a big blow, jeopardising growth prospects and social and economic wellbeing of a large number of people.
The quarterly GDP growth has consistently fallen since Q4 of FY18. If there is a deviation in Q4 of FY19, as shown in the graph below, it is because the National Statistical Office (NSO) revised its data on February 28, 2020, drastically cutting down growth rates in the first three quarters of FY19 (from 8% to 7.1% for Q1; from 7% to 6.2% in Q2 and 6.6% to 5.6% in Q3).
What could be the magnitude of the impact of a complete social and economic shutdown may not be easy to estimate, but it is likely to be far more severe than either the 2016 demonetisation or the 2017 GST rollout. Nobody now disputes that those two events delivered economic shocks from which the economy had not yet recovered when the coronavirus pandemic struck. Little foresight or preparations for country-wide lockdown
The similarity with the 2016’s demonetisation or 2017’s GST does not end at their economic impact. The blow to people and businesses could have been considerably softened but for lack of foresight, planning and strategies. That would have saved a mad scramble by the government too.
For example, Finance Minister Nirmala Sitharaman announced ` 1.76 lakh crore relief package on March 26 afternoon, a good 42 hours after the 21-day lockdown was announced. It would largely benefit the unorganised sector workers, especially daily wage workers, and urban and rural poor. The relief would include cash transfers and PDS (Public Distribution System) supply. This was followed by the Delhi Chief Minister Arvid Kejriwal’s assurance to street vendors, petty traders, and shopkeepers that curfew passes would be provided to them online to prevent their harassment at the hands of cops.
All these steps could have been taken before the lockdown was announced, particularly since the March 24 announcement succeeded a ‘Janta curfew’ of March 22 and a “complete lockdown” of 548 districts a day earlier. The aftershock of sudden lockdown is visible. For one, people rushed into provision stores, making a mockery of ‘social distancing’ which is the primary goal of it. Secondly, a day after the lockdown, online suppliers of grocery, medicine and food, like Amazon, Flipkart, Bigbasket, SuprDaily and many others, suspended their services across the country, citing “confusion” or “restrictions imposed by local authorities” on their movements. Others, like Grofers and FreshToHome, complained of official obstructions.
Two days earlier, another online supplier Milkbasket had stopped delivery services in seven Indian cities saying that it was not being allowed to deliver milk and vegetables, “resulting in us dumping 15,000 litres of milk and throwing over 10,000 kg of fruits and vegetables”. The harassment didn’t restrict to them alone. Cops were seen beating anyone and everyone moving on the streets in many cities across the country, the video evidence of which is circulating on social media. There are instances of cops attacking provision stores in markets too, even when the essential services are allowed during the lockdown.
It was only after several senior state and central government officials stepped in that the prospect of supply of essential services improved. But with trains and trucks also banned, how long their supplies would last is anybody’s guess. The shutdown of planes, trains, and bus services had caused people to rush into airports, railway stations and bus stands, again making a mockery of social distancing. It had another consequence. Inter-state migrants were seen walking hundreds of kilometers with women and kids in tow to their homes because there was no transport and no work.
There was no food or money to buy food for many daily wagers. In Delhi, for example, thousands of daily wagers crowd shelter homes set up by the Delhi government to provide them food, again making a mockery of social distancing. Business Today estimated that about 300 million informal workers could be vulnerable and seeking help.
How the lockdown would impact the economy?

Business Today reached out to two eminent economists with decades of experience in dealing with the Indian economy, Pronab Sen and C Rangarajan, to find out how the lockdown would impact the economy and to what extent. Here is how the lockdown would impact the economy. Pronab Sen says, “At the moment, it is a supply-side problem. Both production and distribution of non-essentials have come to a halt. This affects at least 55% of the economy for three weeks or about `2 lakh crore. It may even be larger due to previous partial lockdowns by various state governments.
“Now, after the lockdown is lifted, there will quite possibly be an increase in sales which will be met through existing inventories. This does not, however, add to the GDP (as these goods and services had already been produced and accounted for). It may take a few more months for the final production and sales to resume.
“In the interim, between now and full production resuming, a large number of people would have been unemployed and not earned any income. As a result, in the second round, demand-side will become a serious constraint.” “The impact of lockdown will be felt through several channels, weakening of domestic demand, disruption in supply chain and disruption in financial market. All of this would result in declining production and retrenchment of employees.”

How serious could the impact be on GDP?