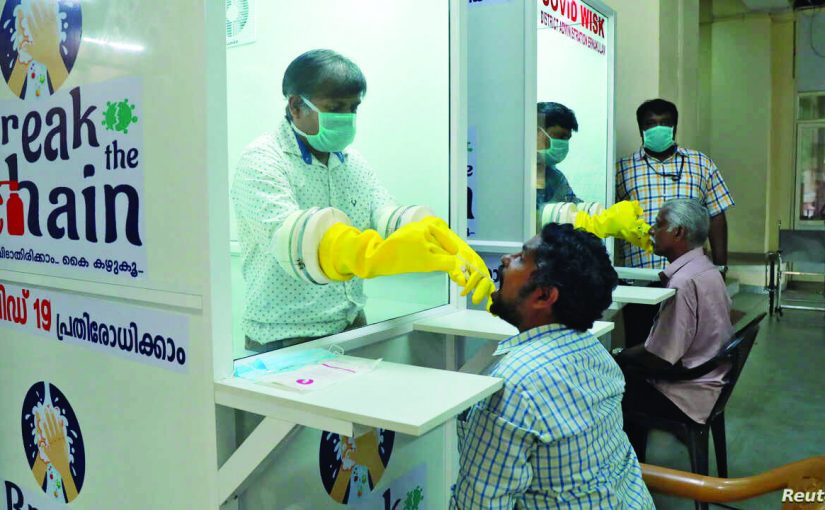 Getting it right in Kerala….. testing, quarantining, community kitchens galore, no wonder th epeople of Kerala are a happy lot!

The battles against containing novel coronavirus infection in the state of Goa and India are not over yet. There have been goof-ups, lack of common sense and frightening biases all around but some stories shine up like young new coin…

Ask around and the consensus is that Kerala is the most sensitive, efficient and unbiased state of them all when it comes to handling the coronavirus pandemic and subsequent lockdown in the country. Perhaps it helps that it is also one of our most literate and educated states even though Mother Earth has been quite unkind to it in recent years.
Let us list all the ways in which Kerala took quick cognizance of the coronavirus epidemic in India. Take a look at this data circulating in print and over social media.
• Kerala has the highest Covid-19 recovery rate and lowest mortality rates in India. The mortality rate is 5.75% in the world average, 3.5% in India and 0.58% in Kerala. In Kerala down south India the authorities used GPS technology, CCTV footage and mobile phone records to trace the movement of one Indian family believed to be amongst the first to be infected. They returned from Italy in late February 2020 and within days medical teams fanned out to all the places they had visited including banks, restaurants, churches, and quickly quarantined just about everyone they had come in contact with – nearly 1,000 people!
• Kerala has the largest number of Covid tests conducted vis-a-vis population in India.
• Covid Testing Kiosks (WISKs) were set up in India for the first time in Kerala, two at Ernakulam Medical College.
• Kerala is also the only state with two hospitals in every district to deal with Covid-19 cases.
• Kerala is the first Indian state to apply for a Convalescent Plasma Therapy and has received ICMR approval.
• Kerala Epidemic Diseases Act was the first legislation in India for the control of communicable diseases.
• The Kerala government was the first in India to provide tele-medicine service during and it is the only state which provides the facility to expatriates.
• Oldest of Covid recovered in India. Two 80-year-olds and a 93-year-old have been released from a government hospital in Kerala.
• Kerala is the first state in India to have developed 18 specs of standards, including contact tracing. Most states in India are now following these standards.
• Kerala is the first state in India to come up with ideas like “No one should starve” and community kitchens (1,400 plus) in India. Kerala also has the largest number of guest worker camps (5,500 plus) in India.
• Kerala is the only state in the country to hire 300 doctors and 400 health inspectors in government hospitals within 24 hours.
• Kerala is the first state in India to announce a package for Rs20,000 crore.
• For the first time in India APL-BPL card holders were provided with one month’s free grain and free essential item kits.
• Absolutely break the chain! This signature campaign was started by Department of Health of Kerala.
• When the anganwadi closed food was delivered to the childrens’ home. Internet connectivity was improved considering the increased use of the Internet. These two pronouncements have been implemented in Kerala and the state has been appreciated by the Supreme Court.
• There are 22,567 government relief camps and shelters across India (data which the Central government has given to the Supreme Court). Out of this figure 15,541 are from Kerala.
• CM-HM-Opp parties strategic thinking is better and faster than any CEO writes Times Groups’ publication Mumbai Mirror.
• “What Kerala thinks today, India will think tomorrow.” This is what anchorman Rajdeep Sardessai said in one of his television shows.
• Kerala’s government system was referred to as “the Standout Performance” and “Seasoned Administrator” by The Indian Express in a national newspaper editorial.
• Kerala is the only state which is transparent where the Chief Minister every day holds a meeting which his colleagues, after which Chief Minister, Health Minister, Revenue Minister and Chief Secretary hold a press conference to inform the public of the situation in the state and around India and presumably the world.
• And finally in Kerala not only CM-HM work but it is a combined effort from all sectors starting from PM-CM-HM-opp parties-Police-Health Workers-Fire & Rescue-Defense Units-free volunteers, NGOs, Panchayats, even every small arts and sports clubs from each ward of Panchayat are contributing to run the community kitchens.
In conclusion one may say that Kerala may be one of our costliest state to live in but Kerala everyone knows the cost of life… and that’s why the world is talking about the “Kerala model” today even in India. If you don’t believe do some checking out if you wish! In the early days, however, one report has it that a doctor in Kerala lost her job after trying to get a patient tested. A general medicine practitioner, Dr Shinu Syamalan, referred a patient who came to the clinic with the complaint of fever (the patient had returned from the Middle East) to the Government Health Department. Unfortunately, the owner of the private clinic where she worked fired her! Confided Dr Syamalan ruefully to a reporter, “The owner said people would stop coming to my clinic if they knew a coronavirus patient was here. He was very harsh to me.”
And the irony is that in those early day of the coronavirus epidemic the Kerala State Health Department refused to take the case seriously, and the patient walked away untested! But after that one imagines the lessons were learnt and learnt quickly too to make up for any initial bumbling and as soon as the much respected and loved 76-year-old Chief Minister of Kerala Pinarayi Vijayan stepped into the picture to take stock of everything and turn the tables on the coronavirus epidemic in his state.