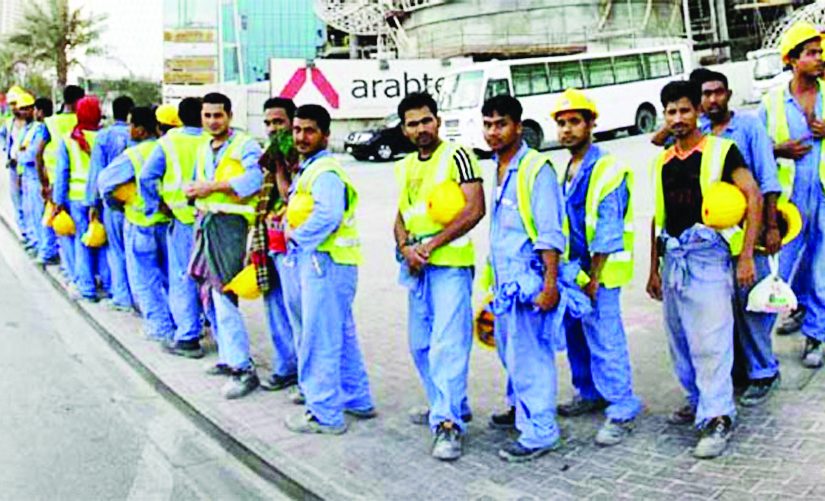 STRANDED: Several lakhs of Indian workers from Kerala and Goa are stranded in Dubai because of the coronavirus triggered lockdown

Not just the film stars like the family of Sanjay Dutt but thousands of Indians including Goans have lost their jobs following the imposition of the lockdown in Dubai…..

As the owner of a Dubai-based events company, John was gearing up for the hectic spring months that generate much of the revenue he needs to pay staff through the quieter, stifling summer.
But over the past two weeks he has laid off a third of his staff, while the remainder are working shorter hours, their time cut by a third or in half, as the coronavirus has hit businesses in the Middle East’s dominant finance and tourism hub.
Clients have closed or stopped paying suppliers as they fear imminent bankruptcy. John is now preparing to use his savings to stave off his company’s collapse. “It’s difficult to survive,” said John, who asked that his real name not be used.
Like governments across the globe, Gulf states are shutting down sections of their economy in a decisive bid to contain the spread of the coronavirus. Saudi Arabia has suspended most domestic and international transport and closed most shops except for supermarkets and pharmacies. The United Arab Emirates has urged residents to stay at home and is halting passenger air travel, except for emergency evacuation flights.
But the oil-producing Gulf is not only dealing with the economic repercussions of the Covid-19 outbreak. Just as cases of coronavirus began to rise, the region was hit by an oil price war between Saudi Arabia and Russia that sent crude prices crashing to their lowest levels in 17 years.
“Their economies could be facing one of their gravest and most serious tests of all time,” said John Sfakianakis, a Gulf expert at the University of Cambridge. “An oil price shock is bad news for the Gulf states as their fiscal cushioning will be tested.”
[Gulf] economies could be facing one of their gravest and most serious tests of all time
John Sfakianakis, University of Cambridge
Saudi Arabia said last week that it would cut budget spending by 5 per cent as it grapples with low oil prices and coronavirus. The move is redolent of the decision to cut spending after a 2014-15 oil price crash, including suspending payments worth tens of billions of dollars to contractors.
“Why would you do it [in the oil price war]? There had better be an ace card that no one knows about. Now we are wondering if any of the projects will go through,” said an executive working for a Saudi company. “We should all be ready to strap in; we are all going to be downsizing because I don’t think our clients are going to be able to pay.”
His company closed its headquarters after Riyadh urged most of the private sector to close or work from home last week. A nationwide curfew running from 7pm to 6am began on Monday.
Gulf states have swiftly announced hefty stimulus packages in an effort to calm nerves. After Saudi Arabia on Friday unveiled a $32bn package to help businesses, Mohammed al-Jadaan, the kingdom’s finance minister, said the country was ready to double debt levels and insisted contractors would be paid.
The UAE central bank has increased its support package to $34bn, which includes allowing banks to offer corporate and retail customers relief from interest and principal repayments.
Abu Dhabi, the UAE’s capital and the wealthiest of the seven-member federation, unveiled a AED9bn ($2.4bn) stimulus package. Dubai’s banks are offering debt repayment holidays to those forced to go on unpaid leave and offering instalment plans for school fees and groceries.
“In these unprecedented times, strong and decisive actions are critical to sustain the economy,” Mohammed al-Shaibani, director-general of the Dubai ruler’s court and chairman of Dubai Islamic Bank, said in a statement.
Unlike some other countries in the Middle East, Gulf states have large foreign exchange reserves to draw on — Abu Dhabi has an $850bn sovereign wealth fund, while Riyadh has $502bn in reserves.
But Dubai, which is dependent on the health of regional crude exporters as well as global trade, lacks the fiscal cushion of large oil revenues. In 2009, the emirate needed $25bn in loans from Abu Dhabi and the UAE’s central bank as it struggled with a credit crisis.
Now, unlike the 2009 crisis which was triggered by debt, the problem is a sudden collapse in demand, which has affected all pillars of Dubai’s economy, said one senior banker.
“It’s systematic across the board. Companies are going to the wall,” the banker said.
A severe Gulf downturn could reverberate far beyond the region as foreigners make up the bulk of private sector workforces, particularly in services and construction.
Remittances from the Gulf are an important source of foreign currency for Asian and other Middle East countries, with outflows of $44.4bn and $36bn from the UAE and Saudi Arabia respectively in 2017, according to World Bank data.
Emirates airline, one of Dubai’s largest employers, has cut most of its flights and is encouraging employees to take early holidays and unpaid leave so it can avoid cutting staff.
As global demand drops, hospitality company Marriott said it was reducing hours and introducing temporary leave to mitigate the impact. Dubai’s hotel occupancy in the first week of March fell 28 per cent year on year to 61 per cent, according to data provider STR.
And as Japan considers postponing the summer Olympics, the viability of Dubai hosting Expo 2020 — which it hoped would attract 25m visitors from October — is in question. Noting the robust measures the UAE has taken to contain the virus, the Expo’s organisers said they would in the coming weeks “reassess and adjust planned preparations” for the trade fair.