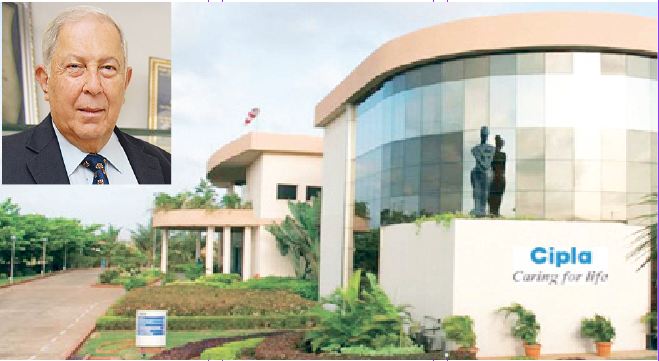 PIONEER: Cipla was started by Yusuf Hamied who did his microbiology studies at the University of Cambridge in the UK. He and his company have played a major role in the fight against pandemics ranging from malaria to SARS to SWINE FLU and more recently, coronavirus

Cipla one of the largest manufacturers of anti-viral formulations has been permitted by the Modi government to export HCQ, a key element in the global battle against the pandemic. Regrettably the fact that the founder owner is a Muslim, Dr Yusuf Hamied is being misused to communalize the export of the drug made in the group’s unit in Verna Industrial Estate in Goa…..

THERE are literally hundreds of companies in India making components of hydroxychloroquine, a key drug in the battle against coronavirus. The largest among them is Cipla started by Dr Yusuf Hamied who is a pioneer in developing formulations against several viral diseases such as Swine Flu and SARS. Dr Hameid is also reported to be the pioneer in finding antidotes against malarial diseases. When Global Medical Experts found that hydroxychloroquine (HCQ) the drug used against malaria is also effective against coronavirus, the United States requested the Indian government to export a huge quantity of the same. Narendra Modi was reluctant to permit the exports both because Indian needed the drug for the increasing number of patients testing positive in the country and objections from China. China produces many of the raw materials which go into the manufacture of hydroxychloroquine. Under pressure from the US president Donald Trump, Modi rejected China’s veto and has permitted the export of the drug to the US and several other European countries affected by the pandemic.
Cipla has the advantage of being the largest manufacturer of hydroxychloroquine in the country. In the light of research revealing its effectiveness in combating coronavirus, the American President Donald Trump had made a request to India’s Prime Minister Narendra Modi to lift the ban against the export of hydroxychloroquine. Modi would have been happy to oblige Trump. Unfortunately, for both of them, China, which is now looked upon as the main suspect in the spread of the virus, objected.

The coronavirus pandemic has taken a new twist with the Federal Drug Authority of the United States alleging that it was China which produced the coronavirus drug in the laboratory in the Wuhan district to unleash biological warfare. The strategy seems to have been to create an international health and economic crises. The lockdown that has been imposed by several countries including the UK has disrupted business establishments worldwide. The largest number of coronavirus cases and deaths due to coronavirus are in the United States.

NOT surprisingly New York, home of the American Stock Market, has witnessed the largest number of coronavirus cases next to China where it originated. Other countries seriously affected are Italy and Spain. Interestingly, the country which is least affected is a close allay of China, North Korea. Confirming allegations that China may have produced coronavirus in its virology lab in the Wuhan District. Significantly the pandemic seems to have been contained at its birth place Wuhan. No fresh cases have been reported in the Wuhan district since the begining of April. The suspicion is that China created both the virus and the antidote and was therefore able to quickly contain the epidemic within China.
After a lot of threats and pressure from the United States Narendra Modi agreed to finally permit the export of the key ingredient in fighting coronavirus to the US. The drug being exported is very critical in the battle against covid-19 as it helps to counter the respiratory problems caused by the latest pandemic. Several American companies are waiting for the drug from India to manufacture formulations to counter the effects of the epedemic. Cipla has collaborated the government laboratories to manufacture drugs against a wide range of respiratory diseases. It has joined the battle within India to stop the rapid spread of the pandemic. Ironically the largest number of cases which have tested positive as well as the second largest deaths have been recorded in Gujarat. In the latest tally of the spread of the pandemic Gujarat is next only to the National capital Delhi.

Among the many Indian companies making Oxcq, the anti-malarial drug which has been found effective against coronavirus is Wallace Pharma which is the part of the CMM group. Wallace in fact is one of the first pharma company to set up after Liberation. Oxcq is the same drug Rx which has given very successful results for fighting coronavirus, Mr Cesar Menezes told Goan Observer. But unlike Cipla, Wallace imports its raw material and does not have the capacity for mass exports to the US. Wallace is comparatively a small player in the manufacturer of this drug.
Cipla is the veteran pharmaceutical company which took advantage of the tax holiday offered to Goa by the Centre in 1995, when Luzinho Falerio was the chief minister for some time. It was Luzinho who planned the Verna Industrial Complex. While originally Verna was meant to be an electronic complex, it came to be dominated by pharmaceutical companies, including Cipla. Cipla was also one of the major units which purchased a large tract of land for setting up a special economic zone when the Cenre announced many sops for SEZs in the country.

In Goa unfortunately most of the companies which bought land under the name of SEZ misused them for real estate. In the light of agitations against SEZ the allotments were cancelled and the SEZ policy itself was scrapped.
The secret of the success of Cipla and some other major Indian pharma companies is the huge manufacture of generic drugs. When new drugs are developed they are priced very high as it includes the price of research and development. It very often takes hundreds of crore to formulate a new drug. Pharma companies which invent a completely new drug are allowed to charge very heavily for the same. But the patent under which new drugs are sold is only valid for a limited quantity of time for them to recover their research costs.

Cipla has been among the pioneers which has been buying the rights to drugs the moment their patent period is over. Once the drug is declared generic the price comes down drastically. Cipla is among the largest manufacturers of generic drugs in the country. It has also been one of the largest exporters of generic drugs to the United States. The plant which will be exporting hydroxychloroquine to the US is located at Verna in Goa. It has been certified by the US Federal Authority which insists on very high quality standards.
It is a matter of great pride to India that its smallest state Goa may become the saviour of the world from coronavirus.