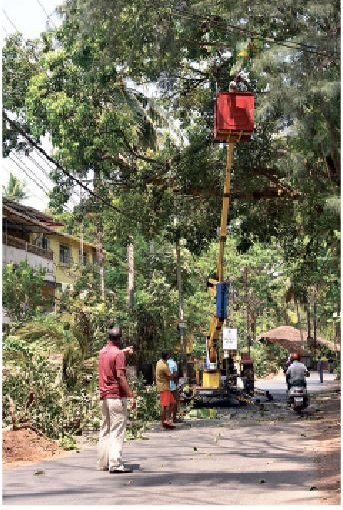 getting ready for monsoons

FAVORITE ACTIVITY: From the looks of it the monsoon rains will be here soon because we came across this familiar pre-monsoon scene of workers hard at work pruning and chopping down trees at Ribandar. Sometimes they do this job gently and sometimes most cruelly without any feelings for a grand old tree! Mercifully though in this case they’re being supervised by local councilor Rupesh Harlankar who we hope knows enough about trees to make them safe without butchering them…hey Ram! (PIC by Bindiya Vaval)

A CIRCULAR dated April 17, 2020 by the Department of Revenue which comes under the Finance Ministry, appealing to all officers and staff to “contribute their one day’s salary every month till March 2021 to the PM CARES (Prime Minister’s Citizen Assistance & Relief in Emergency Situations) Fund to aid the government’s efforts to fight the coronavirus pandemic” is too harsh and cruel.
Deducting one day’s salary for a one month for a cause is fine, but why should government employees permit such a deduction for a whole year when just a couple of months back, those in power at the Centre practically spent several crore of public money on the construction of detention centers for NRC, on renovating Parliament buildings and installing huge statues everywhere?
As per reports in the national media this PM-Cares Fund was mischievously started right in the middle of the pandemic. Despite there being a legit Prime Minister National Relief Fund—PMNRF, where thousands of crore have been collected with full income-tax exemption. The PM-Cares Fund will not be audited by CAG but audited by ‘independent’ auditors — hired ‘friends’ of the government, and this is really shocking.
In the name of fighting Covid-19, this charitable trust or PM-Cares Fund, headed by Narendra Modi with Rajnath Singh, Amit Shah and Nirmala Sitharamanl, will collect funds and spend them on their own. As the fund is private, it won’t come under RTI, and as the fund is outside the purview of CAG, no government agency will be able to audit this fund.
Which clearly means that the donated or collected money from PM-Care Fund will not be used to fight the corona virus pandemic (as being hyped through paid national media) but will definitely be misused to buy opposition MLAs to destabilize/overthrow elected governments of Opposition parties from different states, or simply wasted by all the top leaders of the ruling BJP government at the Centre to fund all future elections and enjoy their own “ache-din” by taking advantage of the ongoing pandemic situation in our country.
Government employees should ask the Narendra Modi- led BJP government at the Centre to give complete accountability and force the same to have a CAG audit from time to time of the PM-Cares Fund instead of blindly allowing the deduction of their one day’s salary every month for one whole year, and somehow stop the government from turning the said controversial fund into another BJP-Cares extortion fund. Jai Hind!
— Jerry Fernandes, Saligao

BSNL IN DIRE STRAITS
IN times when the communication technology has been advancing globally, the BSNL services in the state of Goa are in dire straits. The internet connectivity especially in villages is pathetic on account of which people cannot access online services provided by the government. Even where the network works the speed is extremely slow. It may be no incentive for the contract staff working for BSNL to perform as they have not been paid their salaries for months together.
The government must ensure that there is proper internet connectivity across the State. It is pathetic that there is no mobile connectivity even inside Dabolim airport. Unless there is a concerted focus on providing all the required proper infrastructure, e-governance will remain a dream with transparency and accountability in governance evading us.
Once the governing process is made transparent the government is automatically made accountable. Accountability is answerability of the government to the people. It is the answerability for the deeds of the government. An accountable government is obviously a responsible government.
Narendra Modi said “E-governance is easy governance, effective governance, and also economic governance. E-governance paves the way for good governance.” Time to walk the talk, Mr Prime Minister.
— Aires Rodrigues, Ribandar

PAUPER GOVERNMENT?
THE SUPREME Court first ruled that private testing labs should not charge exorbitant fees for Covid-19 testing. Hours later it ruled that such tests must be free while ruling on a PIL that all tests must be free across the country. The arguments were baffling!
The whole fiasco brings out a lack of reasoning. The novel coronavirus has come into India from outside. The only point of entry were all the ports. It was the duty of the government to ensure there was no such entry or to capture and quarantine infected persons coming in. In what way can the public in India be faulted? Why should an innocent public pay for the tests?
On what grounds does the ICMR allow the labs to charge and that too 4,500 per test? Pune Lab provides the testing kit at1,500 against `4,500 for the imported one. Strangely, no mention is made on the reliability of the tests! State government claim less than 5% on certain rapid test kits! No protection for the user and others who would get infected due to false result, was made by SC!
The SC ruled that Indians abroad must stay where they are relying on government of India submission that they have limited resources and that they wanted to contain the spread in India! Was this not a right time for the SC to observe that the government of India should have thought of this before unnecessarily spending on monstrous statues? How were seafarers clubbed in the same vein? It appears this government works on individual clout and not holistic governance, all the while laying emphasis on paise-saving!
— R Fernandes, Margao

NEW TRAFFIC FINES!
Here are the new traffic fines in view of Cofid-10 as detailed by the Traffic Department. We are not sure how some of them like no spitting in public and keeping face covered all the time will be implemented…but for whatever it is worth, take all precautions when you step out of the house. Even the government has to survive during coronavirus times! At the best of times we Indians love indiscipline, so at the worst of times we have to be disciplined by the police!
— Pankajbala R Patel, Panaji