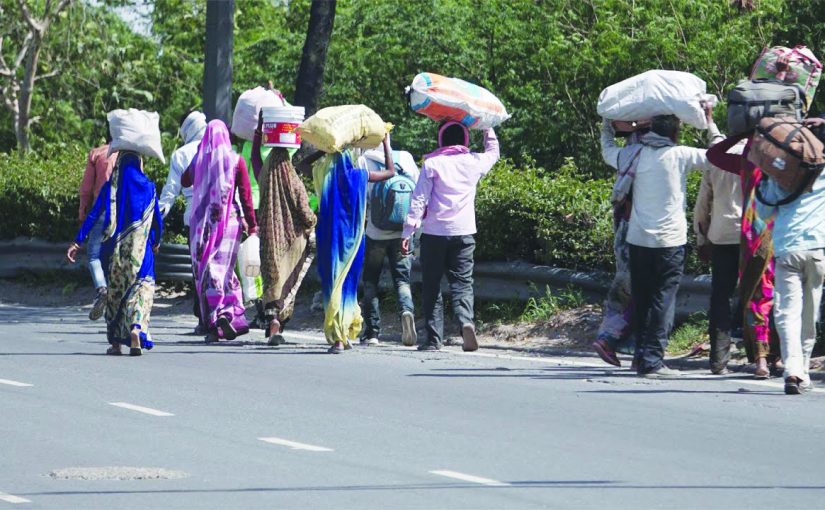 GHAR WAPASI: Lockdown has converted the bulk of our citizens into homeless, jobless, beggars

Thought-provoking Supreme Court advocate, author and human rights activist NANDITA HAKSAR, thinks the pandemic is a good time to erase human rights and kill the Indian Constitution, so that it puts the people of the country on the defensive and more vulnerable than ever before. It is time to take stock of this before we as a people exchange the sweet fruits of democracy for the poisonous thorns of inequality, segregation and totalitarianism…..

WE have been under lockdown for less than 50 days and the result has been that an entire chapter of the Constitution of India has been almost wiped out of existence. I am referring to Part 3 which guarantees basic freedoms and liberties to “we the people, citizens of India.”
The acquiescence of the usually articulate and argumentative Indian intellectual can be understood when we remember that the vast majority of Hindus, including sections of Dalits and minorities, have long practiced social distancing by observing the rules of purity and pollution of the pernicious caste system for all those years — before Covid-19 came upon us. And this is reinforced by the snobbishness of the middle classes which gets a boost during the coronavirus era.
The murder of Part 3 of our Constitution and it is nothing less will ensure that in the post-Covid 19 period, whenever it comes, Indians will be completely disarmed and left with no tools to fight the authoritarian state as it takes over every aspect of our lives.

LET us look at the most basic right of all; the right of equality; Article 14 states: The State shall not deny to any person equality before the law or equal protection of the laws within the territory of India.
What protection did the 45 million interstate migrant workers get the day they were suddenly, without notice, deprived of their livelihood (the right to carry out any trade guaranteed under Article 19 (1) (g)), they had no food or shelter and many were not even given their wages for the work already done. Their desperate situation forced millions of the migrant workers to pack their meager belongings and begin walking home – to their villages, sometimes 500 km away.
Whether it was the horror of what he had done or it was the international embarrassment for Prime Minister Narendra Modi, he apologized to the migrant workers for imposing a three-week national lockdown, calling it harsh but “needed to win” the battle against the coronavirus pandemic.
The media quoted him as saying: “I apologize for taking these harsh steps that have caused difficulties in your lives, especially the poor people. I know some of you will be angry with me. But these tough measures were needed to win this battle… but (he had) no choice but to make these decisions to fight the coronavirus.”
Did the government really have no choice because the situation was so new? In fact the government, specially that led by the BJP, has plenty of experience dealing with several lakh of people walking on the streets during the annual Kanwar Yatra — India’s largest annual religious gathering, with an estimated 12 million participants in the 2010 and 2011 events. The devotees come from the surrounding states of Delhi, Uttar Pradesh, Haryana, Rajasthan, Punjab, Bihar, Odisha and some from Jharkhand, Chhattisgarh and Madhya Pradesh. And throughout their journey arrangements are made for their shelter, food, water and medical aid. Over time this religious pilgrimage has become a way to mobilize politically; so the question arises: Did the movement of migrants not offer any political advantage so they could be deprived of their rights under the Constitution of India.

OFTEN the discussion on the migrant issue has not been about their rights as under citizens but as “Us versus Them, the outsiders.” An interstate migrant worker is not an outsider, an alien but a full citizen with rights. In fact, he or she has additional rights under the interstate migrant act which lies long forgotten.
All those involved in vilification of migrants are directly responsible for the justification of racist attacks on Northeast migrants being beaten, refused entry in shops and called “Corona” and “Chinese”; the spraying of migrants workers with disinfectants and subjecting the migrants to the indignity of standing next to a smiling do-gooder who handed the migrant worker some food. This is undermining the right to human dignity of the migrant.
In contrast, in Manipur, groceries, vegetables, food, whatever was being distributed freely, was kept on tables at one place and the people, both migrants and the poor, could come and help themselves without embarrassment. In Afghanistan, packages were laid out at a stadium and then the charity disappeared so the needy could take their packages.
In total violation of Article 19 (1) (d) which gives Indian citizens the right to move freely throughout the territory of India; and Article 19 (e) which gives Indian citizens the right to reside and settle in any part of the territory of India States did not allow migrants to board trains meant to take them home, because industrialists and builders suddenly realized that they were losing cheap and vulnerable workers.
No one asked why the migrants wanted to go home in the first place; why did they not feel “at home” in their own country; why did they not feel safe and wanted?
There were some exceptions. In Kerala more than 3.5 lakh “guest workers” have been accommodated in 19,764 camps in Kerala waiting for the dangers of the pandemic to pass. The basic needs of the workers like drinking water and cooking facilities have been ensured. This example could easily have been followed in other states, especially in smaller states like Goa. We have to ask why it was not? And it is not enough to blame the government or the Hindutva ideology.
The death of Part 3 of the Indian Constitution is not only due to the responses to the migrant crisis. All citizens have been deprived of the most precious right, the right to life and liberty guaranteed under Article 21. The courts have often read the right to human dignity as being inherent in the right to life and liberty.
Article 21 is meaningless by the legitimization of mass surveillance of the entire population being done in the name of fighting the virus. The Indian State, and many states around the world have armed themselves with extraordinary powers to check and control the population and these measures are not going away any time soon. These authoritarian measures could have been fought by citizens but instead middle class citizens living in gated colonies make the rules in total violation of the right to life and liberty!
For instance, the Residents Welfare Association in many parts of the country refused to allow domestic workers to enter despite the government allowing people to work. This not only deprives the domestic workers of their right to practice their profession (Article 19 (1) (g) but also of their right to life and liberty.

HAVING moved into a gated colony recently I was shocked that even before the pandemic some residents seriously suggested that CCTVs be installed in the lift to catch the owner of the dog that had dared to pee in the lift.
The attitude is that we do no wrong and we are only ensuring our own comfort and safety by spying on those who break the rules. It is this kind of lack of political consciousness that Edward Snowden (American whistleblower who copied and leaked highly classified information from the National Security Agency in 2013 in USA) warned us; surveillance has become a part of our daily life and its minutest details. But even he did not imagine how a pandemic could help in militarizing the world by allowing digital spying of citizens who are suspected of having the virus or the persons who they have been in contact with.
And what about the person suspected of being a patient? There are horrifying reports of how patients have been treated. Here in Goa, Edgar Remedious, had the courage to speak out on his trauma after he was cured of the coronavirus infection. How many others are suffering in silence? There was an interview of a health worker living in a gurudwara in Delhi because she is not welcome in her own home and with neighbors. The fundamental rights of patients, doctors and health workers, have been severely undermined and no amount of banging utensils or lighting or switching off lights can take away that fact.

Article 22 which gives us protection against arrest and detention has been almost eliminated by the increasing police action or arrests and detentions; both in connection with the special regulations in place because of the pandemic and of citizens who have the courage to protest.
The lakhs of children of poor families have been deprived of education guaranteed under Article 21-A. While rich families can ensure their children can take online courses and even get degrees from foreign universities the poor children cannot even go to school.
And the pandemic has taken away our attention from the horrors of the economic crisis looming large; banks on the verge of collapse; the loss of millions of jobs and a pliant population is going to lead to the criminalization of the starving and enforcement of fundamental rights through violent means. This is the time for Indian citizens to guard their lives and liberties with compassion, courage and knowledge.