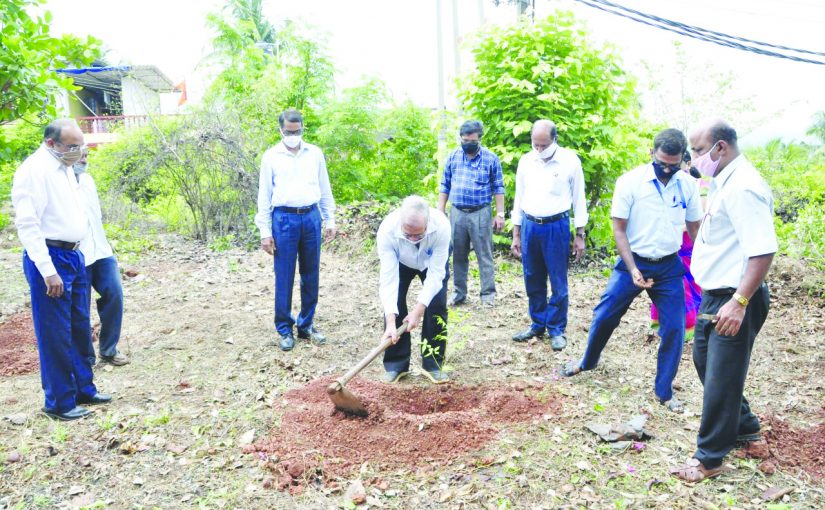 EFFORT NEVER DIES: The Dnyanprasserak Mandal’s College of Research Centre in Assagao (Bardez, Goa) celebrated World Environment Day with a tree planting session on June 4, 2020. Amongst those present were librarian Dr Jayaprakash who has many green messages like “If you get No’ in any answer, remember NO isNext Opportunity!’” So always be positive.

GOA is blessed with a number of very good chess players. They are trained to think 10 moves ahead of any action taken. They have learnt to master the game. Only they can compete in international tournaments.
Covid-19 is a new virus. We must first learn all there is about it. Only then we can take defensive measures. All measures taken must be well thought out: what can happen down the line must be evaluated before taking any action.
Compromising is like lying: Once you start you have no option but to continue doing the same. Decisions taken are a matter of life and death.
We have teachers in the form of other countries who were affected well before us. If we close our eyes and try short cuts: We are only looking down the barrel of a gun.
Those countries underwent: Lockdown, testing all people in big numbers daily, quarantining, contact tracing. They flattened the curve of positive cases and then and only then resorted to unlocking progressively.
India followed the same process: However, we are now unlocking when cases are still rising leave alone flattening of the curve. Goa is doing the same.
If this is a calculated decision to deviate from other successful countries then what can we expect down the line? The government is bound to let the public know. Will we be changing SOP’s as seen in containment zones like Mangor? Will we close offices used by all contacts? We then compromise on even these measures like it is happening in Vasco?
We will then have WHO call for another lockdown as in Pakistan. And just look at the villagers: they are self-locking!!! And we do not want to give more powers to the Panchayats! They know the quality of quarantine places. They know the line for testing. They just know. They are a revelation to TTAG and GCCI! Safety to life first, then economy! Economy is controlled by a few. We know there is vast divide between the rich and poor in our country. All measures are taken in the name of economy but who actually suffers? Ten per cent of Indian population holds 77% of total national wealth. Their returns are being catered to at the cost of the poor lives.
— R Fernandes, Margao
BLAME CM!
THE most stubborn and clueless Dr Pramod Sawant-led BJP government should be held responsible for committing the biggest blunder of re-opening all borders, resuming flights/trains and so to bring in Covid19-infected people from Red Zone states to Goa. All in the name of re-starting industries and for officially allowing the spread of the coronavirus pandemic on a very large scale (not just places like Vasco da Gama) even in rural areas.
Why couldn’t government keep our borders sealed or banned entry of flights/trains for some more time to fully protect Goans, by maintaining strict discipline/hygiene/social distancing? What is the point in now holding meetings and press conferences after Goans are deep trouble and still telling everyone not to panic? After we already have considerable number of Covid19 positive patients from Red Zone states wandering freely in Goa?
Looks like the government of the day is more interested in bringing back migrant outsiders (as most ministers from this government are fully dependent on their votes every election!) from Red Zone states. For economy’s sake Goa special identity will be destroyed. The government of the day does not believe in simple and sensible but enjoys inviting trouble! Viva Goenkar!
— Jerry Fernandes, Saligao

OSCILLATING CHIEF MINISTER!
THE manner in which Chief Minister Pramod Sawant has been merrily oscillating on the Standard Operating Procedure (SOP), it seems he has lost his way in leading the State in its battle against vicious coronavirus pandemic. SOP has been tweaked for the seventh time in the last two months, exposing the government’s lack of proper application of mind. Over the last two months infrastruture had to be put in place to deal with the pandemic. It is incumbent that every person entering Goa be mandatorily tested unless he produces a negative Covid19 certificate issued by an ICMR-recognized lab.
Now with the surge in cases over the last week and with the Covid hospital filled to the brim, the government seems to be in a quandary and unprepared to deal with the crisis. Surely the health of Goans should be a top priority over mining, malls, economy, etc? If health is lost all is lost anyway.
Chief Minister Pramod Sawant act and speak responsibly so that you do not end up as laughing stock. Three weeks ago on the very day Health Minister Vishwajit Rane stated that all should use a mask, he was publicly contradicted by his Chief Minster who claimed that use of masks was not necessary.
The BJP needs to look beyond the party to combat against the virus. It is good that the Opposition in Goa has united. Amongst the current 40 MLAs in the given circumstances Digambar Kamat is the most experienced, active, mature and very practical, whose input and guidance the government should gracefully avail in this time of crisis.
— Aires Rodrigues, Ribandar

WHAT IS THIS NONSENSE?
EVERY day we the people in Goa have to do firefighting to make sure that migrants are admitted in the transit shelter at Fatorda stadium at Margao till trains are arranged or train tickets booked for them to go home. Every day there are issues about workers not being admitted in shelters even as the State is in gross violation in closing the shelters. Why? What are the agendas? Whose agendas are they beholden to? Those of the ones who want “captive labour?” Those who want to support the fleecing of workers with bus tickets at Rs6,000 per head?
Do instructions issued at the top not filter down? Or are instructions not even issued at the top? Where does the problem lie? Every day, when we could have otherwise constructively assisted, why do we have to expend our energies this way? Is there any administration left? Each responsible officer passes the buck like they live in separate kingdoms! No internal coordination. What about political governance? Is it that the Disaster Management Act offers them no role?
How is it that the State has no lists of the migrant workers? Gross failure of the Labour Commissioner’s Office that they cannot provide the list of migrant workers under the Inter-State Migrant Workmen Act? And there is also gross failure of the Fisheries Department if it cannot provide a list of migrant fisher workers, or the Collectorates in that they will not take those lists because they do not consider migrant fisher folk as stranded workers, is that so?
And again how silly they are going through the same failed processes for registration to return home, without even putting some checks and balances in place? Even Supreme Court directives do not matter? Every day we are also simultaneously expected to watch helplessly at gross environmental destruction happening under the cover of Covid19 and imposition of section 144 Cr.P.C. Administration and government, are your hearts made of stone? Do you have a conscience at all?
— Albertina Almeida, courtesy Facebook posting