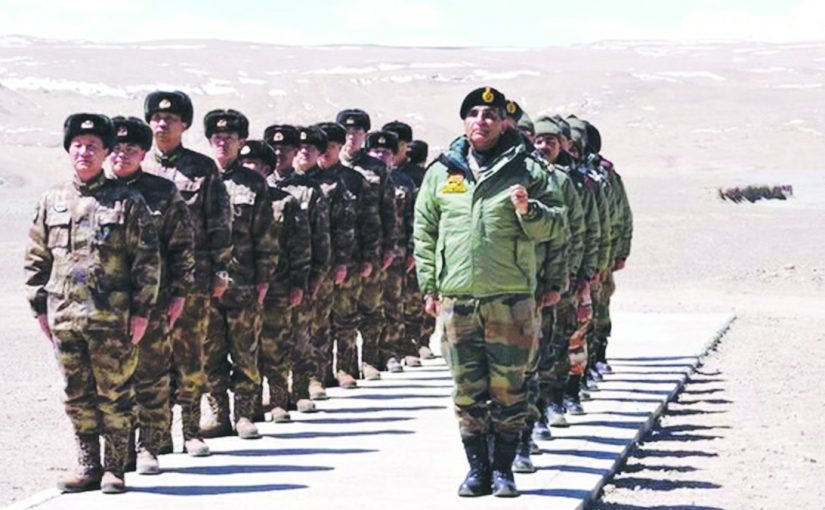 CONFLICT: It is a renewal of the Indo-Chinese conflict as when 58 years ago troops of the two countries confronted each other on the line of control in Ladakh

And a few stray thoughts on the brutal clash between India and China in Ladakh which claimed the lives of 20 Indian soldiers, including Commanding Officer Colonel Bikkamalla Santosh Babu of the 16th battalion of Bihar Regiment. Narendra Modi and all the bhakt of the BJP have been talking about how well-developed India’s defence weapons were during the time of the Mahabharata. The Prime Minister and his Home Minister have been claiming that India knew about the manufacturing techniques of fighter aircraft as dramatized by the fact that Ravana had a Pushpak Vihaman during the wars of the epic Mahabharata. Defence Minister Rajnath Singh has been boasting about our historical expertise in missiles as dramatized by the fireworks that feature in Ramananth Sagar’s blockbuster film `Mahabharat’. The BJP has been taking about our knowledge of even nuclear weapons which our rishi baba had in historical time. ‘
And yet just past early morning on Tuesday there was a bloody skirmish between China and India on the line of control in Ladakh which was recently separated from Jammu & Kashmir and declared a Union Territory. Admittedly, not a bullet was shot between the two sides. The Indian army did not use any of its nuclear missiles. It did not use its nuclear bombs. Incredible as it may sound the battle of Ladakh was fought with iron wiring and nail studded iron rods and stones.

Never mind that in the year 2020 India had acquired the most sophisticated Rafael French fighter aircraft and latest high tech tanks from Israel. Surely in 2020 the Indian army should not have been fighting with soldiers armed with iron rods and stones. The kind of weapons used in brawls in Santa Cruz and Taleigao between the locals gangs. The kind of weapons with which I and my former news editor Anthony Fernandes were attacked by goons in the 1980s. Surely in 2020 the Indian and Chinese armies who have the latest weapons in the world should not be fighting with primitive tools more suited to the vanara monkey tribals who are supposed to have built the bridge from Rameshwaram at the tip of South India to Sri Lanka to rescue Sita.
The only consolation is the claim that as against the 20 Indian soldier victims who martyred themselves on the Indian side, there were reportedly 43 causalities on the Chinese side as they engaged in these curious night fights with deadly rods, barbed wires and stones in Ladakh. The logic is that technically both China and India can claim that they did not breach the Line of Control (LOC) that they had agreed to maintain. The two armies have been facing each other eye ball to eye ball in the freezing cold of the LOC for more than a month now.
This only demonstrates the deceit of China and the cowardice of India. India will not doubt claim that they proved their bravery by refusing to retreat despite the savage attack by China. China on its part will claim that it maintained the spirit of the agreement with India which stipulated that no weapons would be used. Since no bullets were fired and rods and stones cannot be considered as weapons in the 21st century, for the record the terms were adhered to. Typically nobody is talking. The junior Chinese diplomats are accusing India of provoking the brawl. We have yet to hear from our fearless and bold Prime Minister, “unki maan ki baat kab batayege.”

AND a few stray thoughts on Home Minister Amit Shah taking over the maha-yudh against Covid-19 in national capital New Delhi. Unlike other parts of country the national capital has a peculiar administrative set up. Though New Delhi has an elected chief minister and a full-fledged cabinet it is not considered a state. So much so unlike other states in the country, Chief Minister Arvind Kejriwal has no say in law and order — unlike in all the other states in which the chief minister has that prerogative and calls the shots.
Similarly, in other states and Union Territories in the country, health is the responsibility of the chief minister. In the case of New Delhi there are three separate entities controlling health. There are Central government hospitals with which Arvind Kejriwal cannot interfere. There are hospitals run by the Delhi Municipal Corporation which are again outside the purview fo Kejriwal. Similarly, the private hospitals in Delhi are regulated by the Central government. The trouble started when Arvind Kejriwal passed an order exclusively reserving Covid19 beds in all hospitals in Delhi for only the residents of Delhi.
This was struck down by Lt Governor Pradeep Bhaijal on the grounds that New Delhi was the national capital and a large number of the population though working in Delhi, lived in neighbouring areas like Gurgaon which are really parts of Punjab. The fact that New Delhi is also the seat of governance and plays host to all Central government servants might exclude them from admission to Covid19 hospitals. Arvind Kejriwal, in the wake of a huge spike in Covid19 cases wanted to fully or partially take over all the beds in the private hospitals in the state of Delhi.

no beds for covid-19

Forget about getting a single bed in private hospitals, Kejriwal has no control even over the All India Institute of Medical Sciences which is run directly by the Union Ministry of Health. There would have been no problem if there were enough beds for the increasing number of Covid19 patients. Delhi has the dubious distinction of having the largest number of coronavirus patients along with commercial capital Mumbai.
When I was doing my masters in economics in the Bombay School of Economics attached to the Bombay University, modelling was the latest fashion. Modelling is a bit like astrology excepting that it is based on statistical information. The primary objective of government is to predict trends in the growth of the economy or sections of the economy. To cite the example of Covid-19 it is assumed that every infected patient will transfer the infection to ten others. The ten others in turn may transmit the infection to an additional hundred. The hundred may transmit to 10,000 and the 10,000 to a lakh. Kejriwal, on the basis of these economic models, was projecting that by the end of July, New Delhi will require 80,000 beds.
Since New Delhi has only 9,000 Covid-19 beds at the moment and the Delhi increase is over 3,000 to 4,000 more beds are required urgently. Since Delhi is Union Territory the Lt Governor can overrule the orders of Chief Minister Arvind Kejriwal, reserving local beds only for residents of Delhi or even taking over private hospitals exclusively for treating Delhi Covid-19 patients. This is because literally several lakh of people from neighbouring areas from Gurgaon and other parts of Punjab come to work in Delhi every day and consider themselves Delhi residents.
Amit Shah does not want to antagonize the private hospitals which might be kicking back large amounts of the huge fees to him. So he decided to take over the management of Covid19 in Delhi. So far the solution he claims to have found is to allot 500 coaches of the Indian Railways to New Delhi which in the past have been converted as many as 5,000 boggies into hospitals. Since this will not meet the requirements of Kejriwal he is planning to convert the stadiums in Delhi to Covid-19 hospitals.

AND a few stray thoughts on the discovery that the over four month lockdown has had a serious effect on the mental health of the residence of India. Whatever may have been the immediate cause of why Sushant Singh Rajput hanged himself in his Bandra apartment, it is claimed now that the lockdown played a major part. Sushant used to live in his large flat in suburban Bandra, his main fame as he did a biopic role of cricketer Mahendra Singh Dhoni in Hindi film “MS Dhoni: The Untold Story.”
He is not the exception, and there have been several other suicides since lockdown was enforced. There are lot of young people who are depressed for a wide range of reasons. In the case of Sushant Singh Rajput it is claimed that major film producers who were hostile to him tried to kill his career. Just a week ago his publicist Disha Saini had jumped up from a high rise building in Malad. In the normal course people who are depressed may go out and meet their friends and divert themselves. But in the case of lockdowns it is like being imprisoned for one may not leave the house except for brief periods to buy essential goods.
Not only in India but globally there have been suicides attributed to lockdowns. The object of the lockdowns was to save lives by preventing the transmission of Covid-19 to others. But as Modi himself put it, unfortunately it became a choice between life and livelihood. During the lockdown periods the worst affected were daily wage migrant workers who had to leave their rented homes and as they had no money to pay their rent, and also no money to buy food. They were living in hard desperate times and unable to return to their own home states.

And a last stray thoughts on the sad demise of the first Speaker of the Legislative Assembly of Goa Atchut K Sinai Usgaocar. Though to the present generation he is better known as the father of the actress Varsha Usgaocar, he played a very important role in Goan politics. Not only was Usgaocar re-elected for three terms as the Speaker, he was a minister in the Sashikala Kakodkar government. Most importantly, Usgaocar was the president of the MGP at the most crucial time before the Opinion Poll. Usgaocar had moved the resolution demanding the merger of Goa with Maharashtra. Simultaneously, the Maharashtra government also passed a resolution seeking the merger of Goa with its neighbour. Usgaocar was considered among the most honest and competent members of the Goa’s first Legislative Assembly.