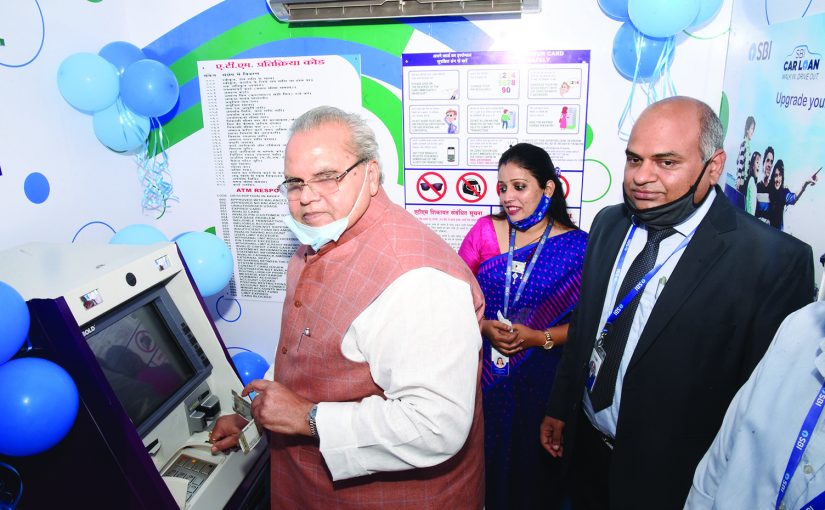 The State Bank of India marked its 65th anniversary with the inauguration an SBI ATM at the Raj Bhavan on July 1, 2020. Governor Satya Pal Malik did the honors in the presence of Rupesh Kumar Thakur (IAS, Secretary to Governor), Gaurish Shankhwalkar (Jt Secretary to Governor), Wing Cdr Rajveer Rathore (ADC to Governor), Vishram Borkar (ADC to Governor) and Naveen Kumar Gupta (DGM, Panaji Zone, SBI), Sandeep Kumar (Regional Manager, North Goa) and Lata Mashelkar (Branch Manager, Dona Paula). The initiative to install an SBI ATM at the Raj Bhavan is to promote and encourage the spirit of going digital amongst government employees. Speaking on the occasion Governor Satya Pal Malik said as much as he observed that the Raj Bhavan has a big campus; the ATM facility will be useful for staff residing in the Raj Bhavan quarters, as also officers, staff and visitors coming in routinely on work, duty or those meeting the governor.

The Goa’s government’s actions clearly indicate that arresting the spread of Covid-19 is no longer under such serious focus! We started off well as a Green Zone state but along the way other things became more important like the economy. Chief Minister Pramod Sawant has clearly indicated that community transmission is here in Goa and data confirms it.
But most recently now he says he has studied the data and it is not so! No community transmission. This too on the day the opening of hotels was announced for the opening up of tourism business in Goa. But if there is community transmission than obviously it is a threat to invite tourists and this contradicts his earlier statement.
Again the government through the Education Department instructed all teachers to report for duty from July 1, 2020. On June 30 the Ministry of HRD, Department of Higher Education (New Delhi) advised all Universities to allow faculty, teachers, etc, to work from home till July 31.
So who elects the government? The citizens as citizens or as businessmen? Who will protect citizens from Covid-19 infection? The High Court has instructed the SGPDA to open the wholesale fish market by July 10, but without compromising on any of the measures detailed which may affect the health and safety of consumers. It concluded from the MOM of 29/6 that the SGPDA was looking for a fresh set of conditions to delay the opening.
The health of those living in the surrounding areas is affected by the fact there is no treatment plant for fish waste! We know the calibre of our government officials, they take a long time on issues which don’t bother businessmen. Whom should we thank for once again delaying the setting up of a fish waste treatment plant?
–R Fernandes, Margao

STOP THIS DESTRUCTION OF GOA!
NATURE provides everything humankind — flora and fauna in its pristine form – needs! No need goes un-provided for. Goa is endowed with natural resources which have become the target of big companies owned by the Adanis, Ambanis and Jindals. But these businessmen are happy to destroy Goa’s natural resources which have already been vastly destroyed. Goa’s green cover is varnishing quickly. Now the latest target is the Bhagwan Mahaveer Wildlife Sanctuary and Mollem National Park, they are coveted by so that death and doom takes a toll of wildlife and wilderness contribution to our health.
The Union Minister for Environment has to be made not only persona non-grata in Goa but also deviously acquired lands for dubious projects have to be taken back from its clutches! Or Goa will very soon be a horrible concrete jungle infested with slums and high-rise condominiums and the gap between poor and rich will continue to widen.
Native Goans to do not want to leave Goa, they would like to save whatever little precious green zones which still exist for perfectly sane reasons. But madmen who don’t belong to Goa would like to destroy Goa to further their fortunes!
Enough is enough. The Western Ghats are a most precious biodiversity area and the Goa government in collusion with the Centre have already started pillaging the countryside by cutting down a whopping number of 54,878 trees for Mopa Airport – which is doomed to fail! The golf course at Tiracol by Leading Hotels is yet another mega scam to destroy the highlands of coastal north Goa. Artificial canopies will guzzle water for keeping golf courses green and the water will be toxic with chemicals and in turn affect the locals health.
Another mammoth project by Vani Agro Limited at Uguem in Sanguem will use six liters of water to brew one liter of beer! Goa does not need this factory. Another malignant project is Ozone Hotel project at Vanxim which will concretize a lush green Divar island and destabilize it.
Goans please unite to stop the government from coveting Goa for destruction. Launch a big revolution right away and once and for all prevent the paradise that is Goa turning into a nightmarish, unhealthy hell for those who live here for all 12 months of year and forever for love of Goa!
— Elvidio Miranda, Panaji

CURTAILED MONSOON SESSION
CURTAILING the duration of the ensuing monsoon session of the Goa Legislative Assembly is a very wrong and does not augur well in the framework of a democracy. Besides the current Covid-19 pandemic, Goa is grappling with many serious issues and the Legislative Assembly is the proper forum for MLAs to raise and debate on them because they concern public life.
That in recent years the quality of the debates have deteriorated is another issue! Once in Goa sessions in the LA were meaningful and fruitful and in the interests of the State, not merely a cosmetic exercise to fulfil the Constitutional requirement that it meets once in six months.
We elect legislators to raise issues concerning the common people and to enact good laws for all. But our Ministers and MLAs are content to time pass inaugurating culverts and toilets and breaking a coconut at the hot-mixing of roads has become a favourite hobby!
It is an irony that many of our Ministers and MLAs struggle even in the short sessions to keep themselves awake during the proceedings in the house. What a shame, do we deserve this political rot?
— Aires Rodrigues, Ribandar