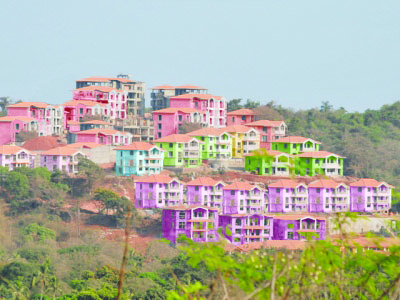 Many celebrities from the wealthy film and business communities have bought vacation homes in Aldeia de Goa, a premium residential complex where a posh flat may cost Rs 5 crore plus, plus.

The bold and the beautiful and the rich and the powerful are coming down to Goa in their own planes or chartered planes, to convert the harsh lockdowns in Mumbai and Delhi into sussegad lockdowns in Goa..

FOR the bold and beautiful, rich and powerful, Goa is the monsoon holiday destination. Not only to all those Mumbaikars and Delhiwallahs who have relocated in Goa, but even non-resident Goan (NRGs) billionaires settled the world over but for whom Goa is the most pleasant paradise to be locked down in. For those with deep pockets who want to run away from the hot spots of covid-19 to a safer place within the country, Goa seems to be the a best option.
For the bold and the beautiful relative to Mumbai, New Delhi, Bengaluru and Chennai which head the coronavirus tally a 100 cases don’t sound very threatening or intimidating. Unlike in Mumbai where access to Juhu and Chowpatty beaches has been blocked so that none many frolic freely the beaches of Goa are free for all. Not only can you swim in the white sands of the southern beaches like Colva and Benaulim, you may also hire a water scooter or go for boat rides or hire your own yacht for a family picnic. The biggest advantage perhaps is that unlike in New Delhi and Mumbai you can breathe the still unpolluted fresh air in Goa. Do not knock this for even fresh air has become a rare luxury in this country and particularly in the urban metros of national capital Delhi and Mumbai, Bengaluru, Chennai.
I do not know whether it is the sossegad attitude of the authorities in Goa which is to blame for the sudden, increasing spurt in covid-19 cases. In a relatively upmarket restaurant where we had gone for lunch on Saturday, July 4, which incidentally was my birthday, there were a group of people seated in a corner table. We got into conversation and they seemed to be crorepati visitors from various parts of the world (some with Goan links). There was a young man who must have been in his early 40s from Mumbai who has a villa in Dona Paula costing Rs3 to Rs5 crore. There was a senior citizen older than my 75 years who claimed that he owned and aviation company in the United States.
There are many small aviation companies in the United States which offer aircraft for hire and they are as affordable for the super wealthy classes. The group of four apparently had the good fortune of coming into Goa just before the lockdowns came into force. They do not seem to be too anxious to return to their home towns or cities. Unlike the migrant labour which was desperate to get back to their home states!
During my conversation with my new friends I learnt that fortunately for tourists and outsiders Goa is not strict about enforcing the lockdowns. In any case there were no Covid-19 cases in Goa till virtually the end of the final lockdown, which made the state government declare itself as the only Green Zone. At one state of the lockdowns various states and Union territories had been classified into red, orange and green zones depending on the severity of Covid-19 in a particular geographical area. Goa went about proudly declaring that it is the only Green Zone state in the country.
Since then things have of course changed and the miniscule coronavirus has slipped into Goa. The first few cases were all imported from the neighbouring states. There were hardly a dozen or so cases a day. There has been a dramatic change with Covid-19 infiltrating into the Dharavi-styled slums of Goa. Dharavi is the largest slum not just in Mumbai but in India and possibly Asia.

IN Goa Covid-19 took root in port city Vasco da Gama slum called Mangor Hill and here it multiplied manifold rapidly. The majority of the thousand odd positive cases are either from Mangor Hill or traced to it. Cases are also being reported from other large slums such as Indira Nagar, Chimbel, and Zuari Nagar near the Zuari Fertilizer factory. What is most worrying is that it is spreading very rapidly in the southern Goan villages where cases are being reported from MLA Reginaldo Lourenco’s constituency Curtorim.
So far the Cuncolim MLA Clafasio Dias has tested positive along with some members of his family. Clafasio is one of the ten Congress MLAs who defected from the Congress to the BJP. There is an apprehension that not only all the others nine defectors but even Chief Minister Pramod Sawant may have got infected. This is because the CM had a meeting with the group of ten defectors just on the eve of the Supreme Court directing Rajesh Patnekar, Speaker of the Goa Legislative Assembly, to immediately decide on the disqualification petition filed against the defecting politicians.
MLAs who defect from one party and join a rival party have to first secure the permission of their party president. In this case not only have the defectors not taken any permission but the defectors have been expelled from the Congress Party. But under the circumstance they cannot leave the Congress and join the BJP. Similarly, in the wake of rumours that except for Babu Azgaokar the two remaining BJP MLAs may also be expelled forced them to have a meeting with the CM and senior officials of the BJP.
Panic within the BJP has grown in the light of the forthcoming budget sessions of the Goa Legislative Assembly. A meeting of the Goa Legislative Assembly is overdue. Manohar Parrikar died before he could hold a budget session. The deadline for holding the budget session even with the concessions of Covid-19 is July 31. The BJP could not decide what to do if they have an Assembly session and if any of the rebel Congress MLAs or the CM himself picked up the deadly viral infection; if there is an Assembly session all 40 MLAs could get infected.
The Speaker, under the circumstance, directed all MLAs to undergo the Covid-19 test. This was not limited to having the thermal gun being aimed at them but included the more elaborate procedure of taking throat swabs from all of them. At the time of writing all MLAs including the CM were under quarantine or voluntary isolation till the test results come in. It could get even more complicated if the Speaker undertakes the Covid-19 test and is found positive.

OVER the last decade there has been mass migration into Goa not only of skilled but unskilled agricultural labour, and of course the bold and the beautiful and rich and powerful who have relocated in Goa. This includes the several thousand if not several lakh residents who have at least a plush flat in one of the gated colonies like Models Millennium or Ocean Park, etc. In the case of the high end gated colonies which are co-operative societies rules were framed quite some time ago about not permitting the lower working employees to come into the housing colonies.
This effectively meant that maid servants, drivers, building cleaners and the entire range of service providers like electricians, plumbers, car cleaners and those who are called for repairing washing machines or the plumbing were banned from entering the complex or colony. There are some gated colonies of Gera’s in Caranzalem which have gone to the extent of even preventing friends and relatives of residents from visiting inside the colony.
My better three-quarters could not have lunch with a good friend because the colony had banned outsiders. In that sense Goa or at least Goan co-operative societies are like the counterparts in upmarket areas of Mumbai like Nepean Sea Road or Bhulabhai Desai Road in central Mumbai. Ironically, one of the super-rich I met earlier in the restaurant has his home on Nepean Sea Road.
BUT the fact remains that Goans continue to remain sossegad about Covid-19. In more recent times the pendulum has swung to the other extreme with villages and village panchayats themselves deciding to voluntarily lockdown their villages or waddo whenever a case of Covid-19 was reported. Not just villages but landmark buildings and offices also shut down because of Covid-19 as in the case of Spaces Building at Patto, Panaji, for a short while for sanitization — after a female employee of the Judicial Court reported Covie-19 positive.
Similarly, the office of the Commissioner of Customs at Vasco da Gama also shut down when one of its staff tested positive. The Ponda Police Station has become a prison for all its staff after a police inspector and several constables reported Covi-19 positive. The seriousness of the contagion crisis has yet to sink in fully and particularly in capital city Panaji. Admittedly there have been Covid-19 cases surfacing in Taleigao suburb where the palatial residence of both the Panaji MLA Babush Monsarrate and his wife who is the Taleigao MLA and Minister for Revenue Jennifer Monserrate. But there is free access to the Miramar beach in Panaji9 and you may see tourists if not locals frolicking on the beach. The Dona Paula jetty may be still under repair but boat rides must have started. Though the five-star hotels and restaurants have not begun operations, the stand alone restaurants are open for business.
And frankly I was not very impressed with the precautions that the restaurant we went to has taken. The owner made a distinction between regular patrons and others not so regular. The owner herself was not wearing a mask and I personally did not see the table being sanitized after guests left. A report in one of the newspapers on Monday revealed that many tourists are pouring into Goa by charted planes so that they may run away from Covid-19! A reported dozen chartered flights arrived at Dabolim airport to offload tourists.

NOT surprisingly there is a section of the Goan population and a group which calls itself the Goa Revolutionary Party which has been opposing the entry of both neighbouring state visitors and tourists from abroad. In fact there are objections being raised even to those who have their own holiday home in Goa. Which means that even if you have your own home in Goa you will have to undergo the Covid-19 test and if you test positive you will have to do quarantine period in residence.
The core issue is not that the people of Goa are sossegad. The ground reality is that the officials and particularly the police force is not taking its job of enforcing Covid-19 rules and regulations seriously. We cannot be complaisant. We have to be more careful than ever because both at national and local levels the number of cases are continuing to rise. At the national level we have crossed eight lakh and we are the third largest country affected by Covid-19, only exceeded by the US and Brazil.
And of course locally the speed with which the infection is spreading is alarming. So much so whether it is in Red Zone Mumbai and Delhi which witnesses over 20,000 cases a day or sossegad Goa – staying home is the best formula if you want to be safe.