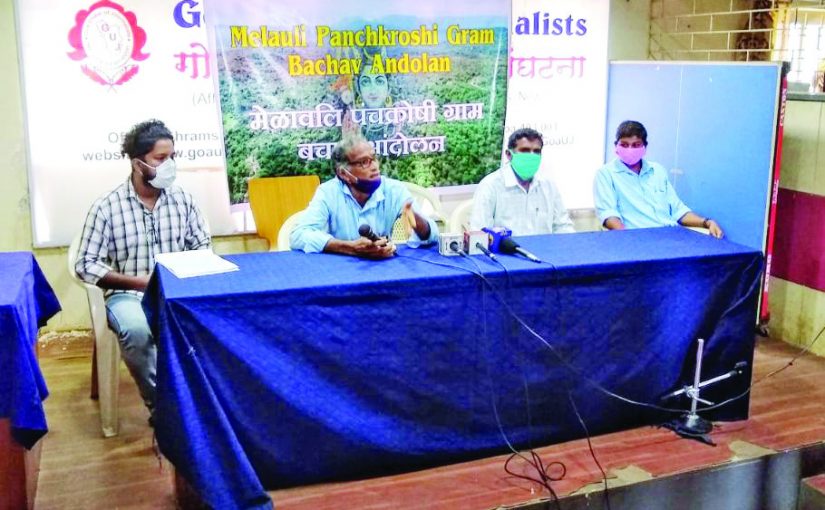 A press conference that started in Melauli ended in Panaji more than a day later! The Goa Union of Journalists (GUJ) held a unique protest by inviting the detained villagers of Melauli -Shell, Sattari to hold a press conference in Panaji on Thursday, July 9, 2020. This was because the day before (on Wednesday) the Valpoi police had heavy handedly disrupted a press conference at Melauli, Sattari, insisting that the organizers did not have the necessary permissions.
Villagers Shubham Shivolkar, Ram Melekar and Pandurang Shivolkar were detained by the Valpoi police while they were preparing to address a press conference on the proposed IIT project under the banner of Melauli Panchkroshi Gram Bachav Andolan at the Jalmi Sateri devasthan in Melauli.
According to Valpoi PI Sagar Ecoskar, the villagers were detained for violating section 144. The villagers said they never violated any guidelines. Instead, there were only four people who were addressing the press conference with face masks and maintaining proper social distance.
Disrupting a press conference didn’t go down well with many, including the state’s journalist fraternity. If a press conference in Sattari can be disrupted for violation of section 144, why not disrupt press conferences in Panaji and other government functions? If there is a containment zone in Sattari, Tiswadi, which houses the state capital of Panaji, also has containment zones.
GUJ has took a serious note of the incident where freedom of speech as well as freedom of the media was challenged. In compensation it invited all detained villagers to Panaji to have their press conference which was so rudely terminated at Melauli-Sattari. Speaking on the incident, GUJ president Rajtilaik Naik pointed out that the “Law cannot be different for different people. This is democracy and everyone deserves freedom of speech and expression.”