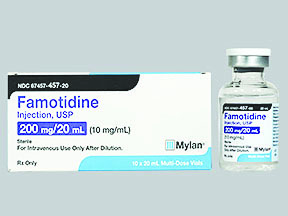 ANTI-VIRAL: Famotidine is among the anti-viral drugs that have proved effective in slowing down the intensity of Covid-19

The international medical community has identified 15 drugs which have been the most effective in preventive the spread of Covid-19 and helping the process of recovery. …….

Scientists have been investigating a plethora of drugs that may be repurposed to fight COVID-19. The hope is that of the 15 drugs listed here, some could be discovered as a treatment for this disease.

The drugs being tested for repurposing to treat COVID-19 tend to fall into two categories: those that target the viral replication cycle, and those that aim to control the symptoms of the disease. The aminoquinolones chloroquine and hydroxychloroquine are polymerase inhibitors classically used as anti-malarial medications. In malaria, they inhibit heme polymerase, causing the accumulation of toxic heme in the parasite, which leads to its death. In COVID-19, it is thought that the drugs keep the virus out of host cells by blocking glycosylation of host receptors and breaking down the production of viral proteins by inhibiting endosomal acidification.
However, although initial studies looked promising, there were flaws in the study design, says James Cutrell, an infectious-disease researcher at the University of Texas Southwestern Medical Center and author of a recent review in the Journal of the American Medical Association on possible COVID-19 medications. Another randomized study of 30 patients in China that came out around the same time found that they provided no benefit over standard treatment, and an observational study, published in the New England Journal of Medicine, hydroxychloroquine administration was not associated with a reduction in death among hospitalized patients with COVID-19. Still, the drugs are the subject of more than 30 different clinical trials in the USA alone.

The human immunodeficiency virus protease inhibitors lopinavir and ritonavir work against coronaviruses via inhibition of 3-chymotrypsin-like protease. In vitro tests have shown the drugs to be effective against SARS-CoV-1 and the coronavirus that causes Middle East respiratory syndrome, but no tests have confirmed that same mechanism of action against SARS-CoV-2. A randomized open-label trial in China of some 200 hospitalized patients did not find the drug combination to be more effective than standard care, but further clinical trials are pending. According to the review in the Journal of the American Medical Association, the drugs may have limited appeal because of side effects, most notably increased nausea and diarrhea and increased risk for liver damage, all of which could exacerbate the signs of COVID-19. In a randomized controlled study published in the New England Journal of Medicine, there was no association between treatment of patients with severe COVID-19 with lopinavir–ritonavir and reduction in SARS-CoV-2 viral load or significant clinical benefit. Another trial on people with mild COVID-19 shows reduced time of viral shedding, reduced time to alleviation of symptoms and reduced hospital stay in a group with lopinavir, ritonavir, IFN-B and ribavirin, as compared to a group receiving lopinavir and ritonavir alone.

Nafamostat and camostat are serine protease inhibitors both approved in Japan for use against pancreatitis in humans. Camostat was previously found in vitro to block the entry of SARS-CoV by acting as an antagonist to the serine protease TMPRSS2, and researchers believe both nafamostat and camostat could have a similar effect in inhibiting SARS-CoV-2. In vitro, both have been found to block the entry of SARS-CoV-2 into cells, although one preprint study reported that nafamostat inhibited viral cell entry with an efficiency roughly 15-fold higher than that of camostat.
These drugs are undergoing phase 2 and phase 2/3 clinical trials in the USA and Japan for their effectiveness against COVID-19, the primary outcome of which will be time to clinical improvement for nafamostat and reduced viral load after treatment for camostat.
“These drugs are quite old, they’re well studied, they have known targets that are exactly the same protease that the virus uses,” says Anton Yuryev, professional services director at Elsevier, who has done screenings for possible COVID-19 drug treatments.

The over-the-counter H2 receptor antagonist heartburn medication famotidine is also been investigated as a possible treatment, after Michael Callahan and colleagues in China reported that patients in Wuhan who happened to be taking heartburn medication seemed less likely to die from or to be intubated during severe COVID-19. These observations have been published as a preprint, but have yet to be peer-reviewed. Hospitals in New York are currently testing intravenous famotidine with hydroxychloroquine and are recruiting hundreds for a phase 3 randomized trial for patients with COVID-19 who have critical status.
The mechanism of action for famotidine is not clear at this time. Famotidine was thought to possibly bind a papain-like protease that is encoded by the SARS-CoV-2 genome and is known to be essential to the entry of SARS-CoV; however, none of the cell assay results so far support that hypothesis, says Robert Malone, a Virginia-based biodefense consultant working on the famotidine tests. Malone says his team is enthusiastic about the drug because of its low cost, low toxicity and bioavailability.

Umifenovir is a small indole-derivative molecule licensed for use only in Russia and China as prophylaxis for influenza virus A and B and is thought by some to have broad-spectrum anti-viral properties, although the evidence of its beneficial effects for human health is still under debate.
Because it is a hydrophobic molecule that is thought to interact with both lipids and proteins, it is thought to achieve its direct-acting anti-viral and host-targeting properties by binding the viral lipid membrane and affecting cellular trafficking of the virus. A study comparing it to lopinavir/ritonavir found it to be more effective at reducing viral loads in patients. Another trial in preprint found neither treatment to be effective at improving outcomes for patients with mild to moderate COVID-19.

Nitazoxanide is a thiazolide used as an anti-infective with efficacy in parasitic, bacterial and viral infections. In viral infections, such as infection with the coronavirus MERS-CoV, it acts by blocking maturation of the viral nucleocapsid N protein that promotes production of the viral particles. This drug is being tested in clinical trials against hydroxychloroquine and with another anti-parasitic, ivermectin.

Ivermectin is a lipophilic macrolide usually used as a broad-spectrum anti-parasitic drug that also affects many invertebrates. In parasites, it acts by binding glutamate-gated chloride ion channels, which leads to depolarization of the cells and paralysis or death of the parasite. When directed against COVID-19, is thought to work by binding and destabilizing cell-transport proteins used to enter the nucleus. In an observational multi-center study with some 1,400 patients that is still under review, administration of ivermectin was associated with a lower death rate (7% versus 21% in the control group) and shorter hospital stays. Fewer intubated patients died in the ivermectin group as well (7% versus 21%). At least two trials are currently recruiting participants to test the drug; one is a pilot study in India that will compare ivermectin to standard of care, and another study in Kentucky will test the drug along with hydroxychloroquine.

Researchers are also testing molecules to offset the potential ‘cytokine storm’ that leads to lung injury and acute respiratory distress syndrome (ARDS) in some patients. Along with efficacy, safety is the main concern with these types of drugs, says Cutrell, adding that immunomodulators can have negative downstream consequences, such as increasing the risk of other type of infections.
Chief among these immunomodulatory drugs being studied for treatment of COVID-19 are corticosteroids. These are well studied but are also one of the bluntest tools for muting the immune system.
These molecules inhibit the expression of many genes encoding inflammatory molecules. But long-term use is associated with cardiovascular disease and bone-density loss. A previous meta-analysis found that corticosteroids are associated with higher mortality in those with influenza pneumonia. One retrospective study in China found that its use in those who developed ARDS was associated with decreased death. A variety of clinical trials are ongoing.
Tocilizumab and sarilumab
In a retrospective study of some 200 patients with COVID-19, those experiencing severe forms of the illness had elevated levels of the inflammatory cytokine IL-6. It is thought that cytokine-release syndrome is involved in the exacerbation of severe reactions to the virus, causing ARDS even as viral loads diminish. A variety of drugs that block different cytokines are being tested in clinical trials, including tocilizumab and sarilumab, both monoclonal-antibody antagonists of the IL-6 receptor that are normally used to treat rheumatoid arthritis. The results of a randomized controlled study of tocilizumab appear to be promising, although the data have not been published yet. Preliminary results from a phase 2 study of sarilumab show some positive trends from drug administration in patient groups categorized as ‘critical’ but negative results in patients in the ‘severe’ group (those requiring oxygen supplementation but not intubation). The third phase of that trial is testing only its higher dose of the drug versus placebo in the critical group.
“I do think there may be a subset of patients who have this really exaggerated inflammatory response, that may be benefit from that, but we’ll need to watch these trials closely,” says Cutrell.

Researchers in China and Italy are recruiting for clinical trials to test bevacizumab, a monoclonal antibody that serves as a medication directed against the signaling protein VEGF (vascular endothelial growth factor) in a variety of cancer treatments. The drug suppresses tumors by inhibiting the growth of blood vessels that feed the tumor. By suppressing VEGF, this drug can also potentially reduce vascular permeability and thereby decrease the amount fluid entering the lungs of patients with COVID-19 who are suffering from ARDS.

A surprising source of immunomodulation could be the antidepressant fluvoxamine, which is normally used to treat obsessive-compulsive disorder. Previous studies in animals found that this selective serotonin-reuptake inhibitor binds to the sigma-1 receptor to shut down the inflammatory cascade from the endoplasmic reticulum in cells.
Researchers are hoping to recruit some 150 people from Missouri and Illinois to participate in a randomized placebo-controlled trial. Patients with mild symptoms of COVID-19 will be mailed either the drug or a placebo, and doctors will monitor results remotely.
Caline Mattar, an infectious-disease researcher at the Washington University in St. Louis, says this trial also will be in outpatient setting, another advantage to the use of an oral medication such as fluvoxamine.
“It’s a drug that we have used in many patients and we know that it’s safe,” she says.
All of these drug repurposing studies are under the microscope of public scrutiny
For any of these drugs, researchers need solid clinical trials, but that is even more difficult with public scrutiny over readily available drugs.
Malone is anxious not to repeat the mistakes made with chloroquine and hydroxychloroquine, which became overhyped in a way that stymies clinical trials and supplies of the drug.
“We need to allow good science to be done before drawing conclusions,” says Malone.
He is also worried about finding the money to do those trials, especially when much of the funding is going toward the development of vaccines in what he considers to be an unrealistic timeline.
“One cannot raise capital when senior government officials are touting that a vaccine is going to be available in 12 to 18 months,” he says.
If repurposed drugs play a part in helping the public endure the pandemic, researchers do not have the luxury to try to build perfect compounds.
“Perfect is the enemy of the good, and we kind of have to work with what we have,” says Malone.