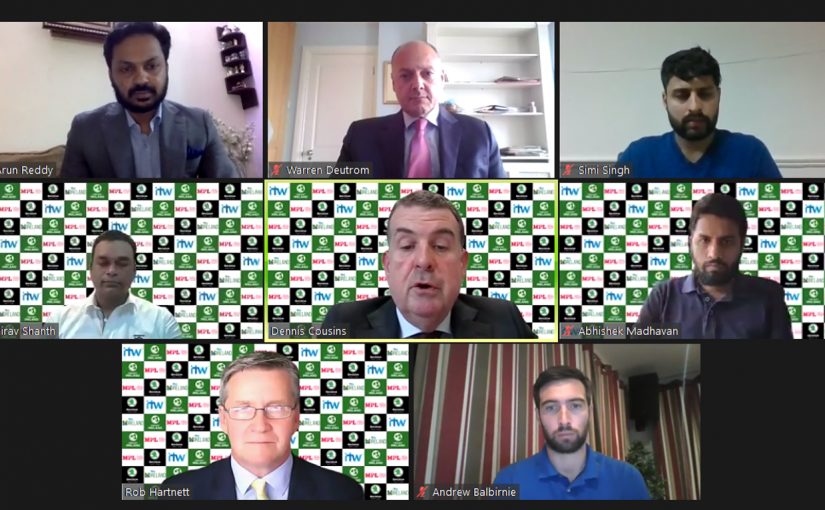 Mobile Premier League (MPL): India’s largest sports and mobile gaming platform has partnered with Cricket Ireland and ITW Consulting to sponsor the Irish Men’s team jerseys for the upcoming One-Day International Series against England beginning July 30, 2020. As an Indian brand supporting the Ireland cricket team, MPL is reinforcing the love for the sport among Indian audiences and the passion with which they follow international tournaments. Founded in 2018, MPL is India’s largest Mobile Gaming and Esports platform, it has grown to over 40 million registered users and currently has over 50 games, including titles like FreeFire and World Cricket Championship.

JUDGES appointed to the Supreme Court and State High Courts have to be fiercely impartial in meting out justice. It has been observed that even judges of the SC are indulging in partisanship in support of the government in power, when the government is definitely wrong and infringing on laws that being flouted by the government. In fact, government is the breaker of the law though it is supposed to uphold it. SC is playing poodle of the government.
Goa has had a fair share of dubious Supreme Court rulings. Prominent amongst them is the Mopa airport granting of environmental clearance, it smacks of partisanship, permitting the slaughter of 54,676 trees – destroying the Mopa plateau and going against its own stance of having upheld the Federation of Rainbow Warriors and another that had pinned the government of Goa, GMR and the MoEF & CC by upholding that argument for nine months. Then much against expectation done a volte face ruling against the Federation of Rainbow Warriors’ water tight argument in the case.
It is a glaring fact that people are not allowed to even cut one tree while the government may fell thousands of trees with impunity in the name of development that is not required. The Supreme Court should not make the same mistake in the case of the Bhagwan Mahaveer Wildlife Sanctuary and National Park in Molem. The Western Ghats is the United Nations conservation zone and thus, protected.
Be just, do not act like the poodle of the Central government and vitiate the fact that SC is the custodian of the law. Stick to the letter and spirit of the law! In the case of the Mopa airport it is a big scam against the poor peasants of Mopa plateau, since the government has cheated them by giving them a pittance. The judgement on Covid-19 is hanging like a Damocles sword. SC should justify the trust reposed in it.
— Elvidio Miranda, Panaji

NON-GOAN LOVE!
IN a very mind-boggling move Industries Minister Vishwajit Rane has appointed a very inexperienced and unqualified young lady as director of the Goa Industrial Development Corporation. The non-Goan lady who has no knowledge of Konkani or Marathi has been also appointed by Vishwajit Rane on the joint task force constituted by the government to promote investment in the State. Couldn’t the government find any Goans for these posts?
A few months ago Vishwajit Rane, also minister for Women & Child Development, appointed the very same lady as chairperson of Goa State Commission for Women. But she soon resigned to be the Health Minister’s Officer on Special Duty (OSD). This lady not long ago was linked with Leading Hotels which was venturing into the controversial golf course at Tiracol.
Ironically, the dashing young lady drives a BMW Sports car bought on June 22 this year and surprisingly stands registered in the name of M/s Ahadh Engineering Constructions, a company struck out from the books of the Registrar of Companies some years ago.
There is more to all this than meets the eye. The Chief Secretary who is also the Chief Vigilance Officer of the State should meticulously examine the issue. Rane should realize that politics is about honesty, humbleness and statesmanship, with no room for arrogance and abuse of power. May better sense prevail with the minister who has undoubtedly drifted himself way overboard.
— Aires Rodrigues, Ribandar

PUBLIC ENEMY NO.1
THE Covid 19 started as public enemy number 1 and Goans kept it at bay because they saw it as such: An enemy. We were rewarded with 0 cases! Soon, from the status of enemy, the unscrupulous recruited the same as their “agent” to fill up their greedy coffers. Hills were cut, fields were filled and private constructions built near water fronts! Private businessmens’ marina projects were being pushed through. Bull dosing of double tracking! Hotels and tourism opened for all and sundry, using the “agent” to cause “fear” of loss of life! Strange, what with 95% gains from a Rs30,000 crore industry going into the pockets of private businessmen!
Let us not forget the “unscrupulous” tourists who come to Goa: They are just that-unscrupulous. There is no doubt as to for whom the virus agent works for. Precious public money is being spent on untested “immunity” boosters much the same way physics and microbiology laws are being re-written! This is a new virus. It is like saying caju feni can ward off colds, so too the virus.
Now wait for the pharma companies and government to to really put its agent to work. Vaccines are being rolled out, not just being fast tracked. What will be the side effects? Will we have time to wait and watch? No, we will be told that social distancing cannot be maintained: Take the vaccine. In Goa, all SOP’s are just on paper: much like letters to the editor! The people are caught between the devil and the deep blue sea: the virus or the fast-tracked vaccine!
— R Fernandes, Margao

REJECT COVID-19 TESTING?
I HAVE been reading David Wolfe’s Telegram Group notices and a warning is going out for people to reject Covid-19 testing. The question being asked is Can the swab test for Covid-19 be a vaccine in disguise? For this is how they vaccinate cattle, through the nose. Is it true that the nasal swab could be contaminated with the contagion itself, we already have evidence of that from March 31, 2020 (https://www.foxnews.com/world/coronavirus-tests-uk-contaminated-covid-19)
Can pharmaceutical companies and governments be trusted. They have proven that repeatedly again and again to us all our lives. For example, look at this track record: https://en.wikipedia.org/wiki/List¬-_oflargest_pharmaceutical¬_settlements
The current state of nasal vaccine technology has been described here: https://www.ncbi.nim.nih.gov/pmc/artickles/PMC6468177
Bill Gates and his cronies want control and depopulation. That is their agenda. By all indications, manufactured contagions and toxic vaccines are how they plan to achieve their goals! I strongly advise everyone to refuse Covid-19 tests – your life likely depends on it.
Please answer! In third world countries like India where only two per cent maybe live first world lifestyles, we have a problem, we ask no questions and generally behave like lambs happy to go to slaughter! Will someone throw some light on all this and in any case there is no harm is checking it out. Some enlightenment and not brainwashing is required here.
— Pankajbala R Patel, Panaji

“Covid-19 has been likened to an X-ray, revealing fractures in the fragile skeleton of the societies we have built.
It is exposing fallacies and falsehoods everywhere: The lie that free markets can deliver healthcare for all; The fiction that unpaid care work is not work; The delusion that we live in a post-racist world;
The myth that we are all in the same boat.
Because while we are all floating on the same sea, it’s clear that some of us are in superyachts while others are clinging to the floating debris.”
—Antonio Guterres, UN secretary general, Mandela Day address, July 18, 2020