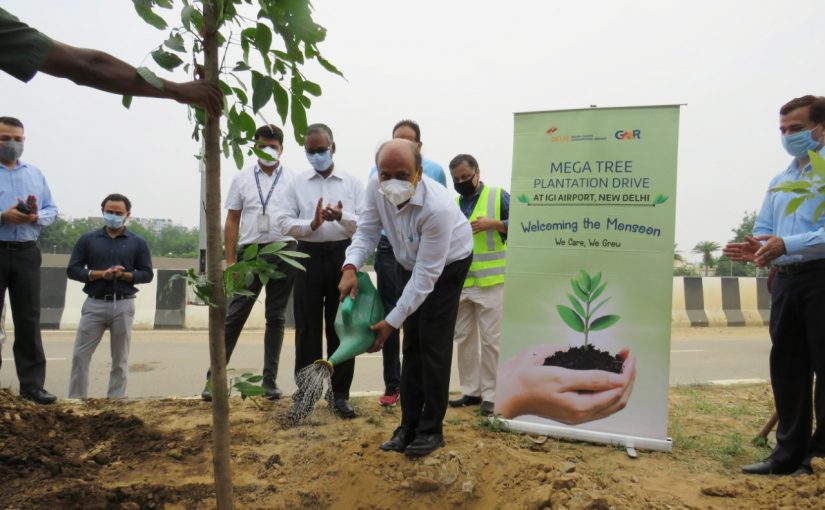 ALL FOR TREES! Delhi International Airport Ltd (DIAL, a GMR led consortium has launched a mega plantation drive around Delhi airport which is slated to be one of the greenest airports of the country. The Whitepaper mega drive will see 6,000 saplings of indigenous trees being planted over a year. One fully grown tree can reportedly absorb 60,999 kg CO2/year! Pic shows CEO- DIAL Videh Kumar Jaipuriar kick starting the tree plantation drive by planting a sapling. Some 200 saplings were planted in a single day near Hanuman Mandir. DIAL maintains about a 100 acres of dedicated landscapes within the upcoming Delhi airport complex.

THE suspect move by the Corporation of the City of Panaji (CCP) to keep on hold renewals of offshore casino trade licences is a stunt that fools nobody. The CCP could have proved how bona fide it is by rejecting the renewal applications, as Panaji MLA Atanasio Babush Monserrate who controls the CCP had last year publicly promised that he would remove casinos from river Mandovi within 100 days of being elected.
But this scam-ridden CCP by keeping applications pending only leaves room for negotiations before sealing casino deals. There is also a possibility that the casino operators may move the High Court and if that happens the CCP will have the excuse of saying that licences were renewed on directions of the High Court!
We all still remember how on May 31 last year MLA Babush Monserrate and Mayor Uday Madkaikar led a farcical CCP team to demolish illegal encroachments by casinos put up at the Panaji Jetty public footpaths – but there was no follow up action. With Monserrate in the ruling party now he should have lived up to his promise to the people of Panaji by getting the government to officially remove the Casinos from the river once and for all.
While as leader of the Opposition late chief minister, Manohar Parrikar, had vociferously branded casinos a “social evil” and “dens of vice.” While spearheading an agitation against casinos, Parrikar vowed to make sure all casinos were thrown out of Goa if BJP came to power. But what a dramatic U-turn in March 2012 after coming to power! The BJP has gone all out to promote, shield and even increase the number of casinos and now Chief Minister Pramod Sawant has publicly stated that casinos are a very integral and vital part of Goa’s tourism trade.
—Aires Rodrigues, Ribandar

EDUCATION POLICY
THE Union Cabinet has approved a new National Education Policy (NEP) on MOI making mother tongue or regional language as the medium of instruction up to Class 5, English as optional till Class 8 and a dead language like Sanskrit as mainstream with strong offerings at school as well as in higher education. Looks like the BJP leaders at the Center have deliberately brought this most senseless policy on MOI in the name of bringing in new reforms in primary education with the sole intention of destroying a common language of today’s India, namely English. It will take us backwards to the dark ages in the long run.
That’s because they still don’t know the real value of an important international language like English as most of them are illiterate and cannot speak English with proper grammar, due to this they now want to see the youth of our country (especially the poor) remain backward in life without any future in the outside global world.
Some say we should wholeheartedly support NEP without complaints by giving the examples of France, Germany, Russia, Israel, Japan, Korea, etc, but how is that just possible? When there are more than thousands of mother tongue and regional languages throughout India and no one common single unifying language like as in the other foreign countries?
Those foreign countries are self-reliant and provide decent jobs for people permanently in a single common language, whereas India doesn’t have the capacity to provide even temporary jobs after studying several regional languages within India and due to which our youngsters are forced hunt for jobs abroad after passing out from all the English medium primary high schools.
I therefore strongly disagree with this new NEP especially on MOI as it will destroy the future of Indian youth in the long run, because no matter how much the government may justify this policy, it is practically near impossible to put every Indian inside a single box — be it with religion, language, culture or food in a multi-cultural diverse country like India.
Yes, this idea of “one language, one religion, one nation” which the BJP leaders are currently forcibly trying to implement under some pretext or the other everywhere will not just boomerang on them but will prove disastrous and even break the country into multiple states and languages instead of unifying the country and Indians in the long run. God alone save India and its unity. Jai Hind!
—R Fernandes, Saligao

ECONOMIC FRAUDSTERS
THE fall from grace of the Anil Ambani group of companies and the fact that it owes even Chinese companies large sums of money, the fleeing from justice of Vijay Mallya of Kingfisher Airlines and Nirav Modi and Mehul Choksi of Gitanjali Gems, the fiasco of Sahara and the inability of the government to bring to book Subrata Roy, besides the IL&FS collapse as well as the huge sum of money that has been unpaid to the Air India…have in totality defrauded banks and the Center’s exchequer of at least one and half lakh crore rupees.
The Enforcement Directorate and Central Bureau of Investigation has conducted witch hunts against Opposition but have not been able to nail the perpetrators of the financial frauds, and therefore failed to recover the bank loans or have the criminals locked up for life. These six companies mentioned have all folded up before the pandemic and cannot point the finger at loss of business. They have to be brought to justice.
But as big-time fraudsters are concerned they do not even materialize. Some have fled the country and others roam in broad daylight, they are not being even probed for financial crimes meriting huge prison terms. One reason for this could be connivance of the authorities and so they go free! Could it be a fact that these companies have contributed to the party of the government in power and are therefore not being brought to justice?
The law is taking too much time and the NPAs of the public sector banks in particular are zooming in the face of big businesses not paying up their loans. Even the finance minister is not following up action for these mega economic crimes. Why so much lethargy on the part of the government?
—Elvidio Miranda, Panaji

LPG SUBSIDY SUSPENDED?
THE Central government has suspended subsidy on liquefied petroleum gas ( LPG) during the lockdown despite the fact that oil prices are at an all time low! In fact, since most citizens are facing a tough economic situation during these Covid-19 pandemic it should have been the duty of the government to assist people by crediting LPG subsidy their bank accounts. The Central government is being particularly hard on people who have lost jobs and do not have resources to fall back on.
The government of Goa is also caught up in an economic quagmire because of the pandemic and a large portion of State’s finances diverted to medical facilities for Covid-19 affected patients, with the epidemic touching higher numbers than the national averages, be it in the infection rate as well as the death rate. Will the Goa government honour payments for social welfare schemes such as the Griha Aadhaar, Dayanand Social Welfare Scheme and Laadli Laxmi?
If the government has the genuine financial status or details of applicants, then it would be prudent for the government to credit those in most need. It would be unfair if it fails to credit payment to all those who have applied and been allotted in the schemes. I hope the government doesn’t suspend social welfare schemes as it would adversely impact vulnerable sections of society, especially since food prices have registered an increase of 30-40% this monsoon.
The government cannot back track on its commitments. I have come across Griha Aadhar beneficiaries whose money has not been credited in account and they are running here and there. The festival season is also round the corner and people should not be left in the lurch. It is unlikely that Covid-19 will beat a hasty retreat.
—Stephen Dias, Dona Paula