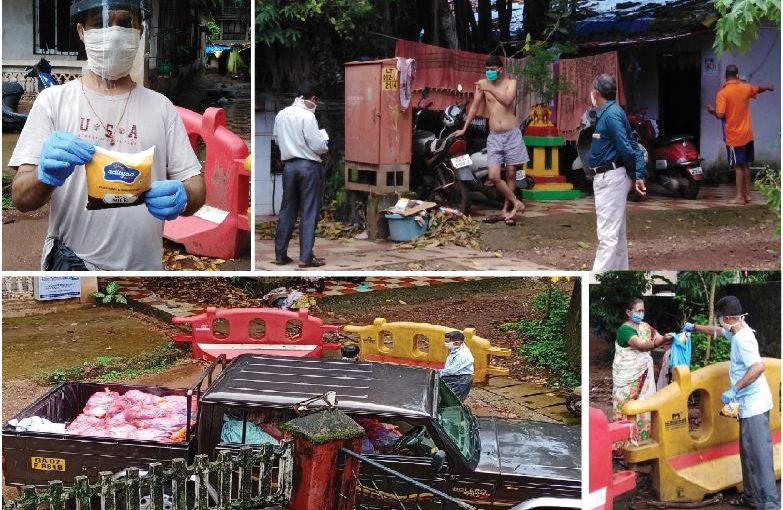 COVID-19 MICRO CONTAINMENT ZONE: At Dempobhat in Tonca in capital Panaji life came to a virtual stop when a Covid-19 case was positive; here is “milk boy” Ramdas Dongrekar bringing in the milk bags for distribution for those isolated at home for 14 days; the Bolero is distributing ration packets; speaking to locals affected are mamlatdar Rahul Desai and official; milk and rations were passed across the barrier put up

A first-person account of what happens when suddenly one wakes up in the midst of a Covid-19 positive case scare… except that it was no scare, it was for real.

WHAT A HALLABALOO ABOUT TESTING?

GOA and capital city Panaji are definitely in panic mode with Covid-19 positive cases emerging here, there and everywhere. The panic means the moment an area is sealed in micro containment just about everybody wants to be tested to see if they have caught the infection! Adding to the confusion is nobody knows about what Covid-testing is all about and how it works. What is all the most common test to do with “throat or nasal swabs” all about and what does it entail? Is this just one test or a dual test?
Before the testing a little information to allay fears is warranted. Reportedly, the fear-mongering going on about the deadly contagion has set in and more and more people are flocking in to do Covid-19 test just for peace of mind! However, it is not so simple. There are two kinds of Covid-19 tests – viral tests and antibody tests and both are complicated enough to give one a headache understanding them.
For instance, a viral test tells you if you are currently infected. An antibody test tells you if you had a past infection but it may not show if you have a current infection – for it can take one to three weeks after the infection for your body to make antibodies. Having antibodies to the virus that causes Covid-19 infection might provide protection from getting infected with the virus again. If it does, we do not know how much protection the antibodies might provide or how long this protection might last.
So it goes. No wonder these panic-stricken Covid-19 times everybody is urging everybody to go and have this corona test done and then begins the long wait to know if one is negative or positive. According to Dr Utkarsh Bethodkar of the Urban Health Center they’re testing 3,000 people daily who’re coming in to be tested. Such is the fear and panic amongst the Goan people. Clearly, the quick turnover of testing is not commensurate to quick efficient results for the system is overburdened and time passes insidiously and torturously. With the most common test called RC-PCR swab testing results are 14 days maximum to come in and symptomatic infected folk are quarantined at home, hospital or quarantine center allotted to them. All depending on how symptomatic they are!
There is news of the introduction of quicker testing, namely the Standard Q Covid-19 Ag antigen kits tests of 30 minute duration, which now the Goa government has mandatory for all visitors travelling into the state. They are being charged Rs2,000 (never mind that this rapid antigen test kit price has been capped at Rs450 by the ICMR).
Then there is much talk of the Innovaccer partnership whereby Goa has become the first state to adopt technology solutions to tackle Covid-19. This is India’s first automated self-evaluation assessment test which revolves around an app to be downloaded and one may test oneself making payment online presumably. The general advice going around is please don’t do this online test on your own for it is more bogus than for real!
Some of course are unable to make up their minds whether to get themselves tested or not, just because one morning they find they’re living in or next door to a sealed containment zone. Overnight someone in the area has tested Covid-19 positive and either they have been taken away to a covidkar’s center or with other residents quarantined for a fortnight at a stretch until the green signal is given…from the sound of the swab viral test entails a swab collecting tissue from throat or nose but the swabs have to be kept in low temperature conditions until tested in designated laboratory – one wonders if there are any dead or live coronaviruses in a sample going under an electron microscope?
A busy Dr Bethodkar (doctor in charge at Panaji Urban Health Centre) in a brief conversation dismissed all talk of swabs going under electron microscope as one imagined. The ignorance is huge even in the media! He said there are now four or five kinds of tests available in Goa for SARS-CoV-2 (official description) but they are using the RT-PCR swab testing at government centers, which should actually take only three to four hours to give result – but there is such a backlog of tests awaiting results due to the rush of people anxious to get themselves tested. The system is overburdened and near collapse. The fear-mongering and panic in the minds of the general public needs to be eased.
Interestingly, some learned patients tell me that the RC-PCR virus test should not be commonly used for testing for Covid-19 – for it is more correctly used for gene sequencing!
Until someone works this out private players in healthcare have been given permission to conduct Covid-19 viral and antigen/antibodies tests. It is anyone’s guess of course how much doing the Covid-19 tests will cost privately but perhaps this will ease the chaotic burden currently being borne at government health centers and other Covid-19 hospitals and facilities.