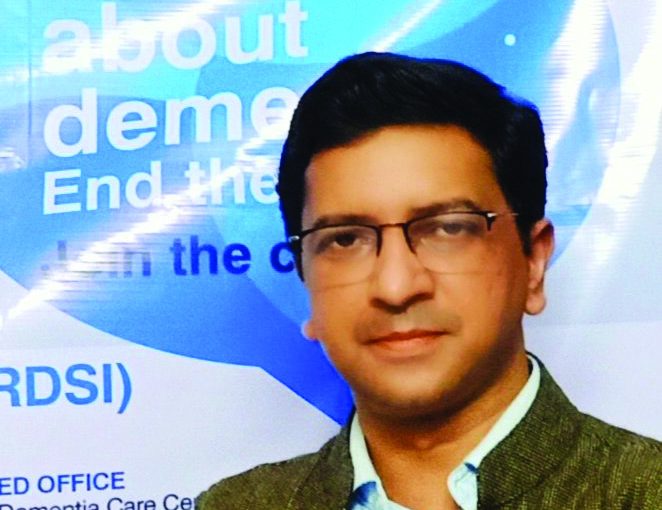 Dr Amit Dias…. concerned about growing dementia in India and how it can be treated in advance

Q. Dementia and Alzheimer’s disease are set to become even more commonplace among the population in the years to come, do you think that globally we are equipped to deal with this healthcare challenge?
We will never be equipped to deal with the rising tide of dementia. However we need to take steps in the direction of building capacity to deal with the global health care challenge.
We are talking about large numbers…. It is estimated that worldwide fifty million people live with dementia, and the number is projected to increase to 152 million by 2050, rising particularly in the low- and middle- income countries where around two thirds of people with dementia live. Dementia affects individuals, their families and the economy, with global costs estimated to about US$1 trillion. The first step in this direction is to recognise that it is a problem and understand that it’s a public health priority.

Q. Despite the lower rate of dementia, India’s vast population still entails a large subsection of the population prone to dementia. Do you think India’s health system is prepared to cope with rising cases of dementia?
Health in India is a state subject and the priority given to health and dementia in particular varies. Kerala for example has the Kerala State Initiative for Dementia. The state of Goa has also made a commitment to help the cause of people with dementia. India has a good health network and primary health care. The way to reach out to all is to enhance the capacity of primary health care to deal with people with dementia in the community.
My research on using lay healthcare workers (in non-specialist healthcare) has proven to be a successful and cost-effective model for providing healthcare to the community and can be replicated through the country to reach those in need. Old age homes in India, for example, do not admit people with dementia and very few long-term care facilities in the country admit people with Alzheimer’s disease or other dementia.

Q. As cases of dementia increase in India, do you think many young people will eventually be forced to leave the workforce to act as full time carers where care facilities are either unavailable or financially out-of-reach?
This has already started happening. We see a number of caregivers who have given up their job or sometimes the prospects of getting married and make a lot of sacrifices to look after their loved one with dementia. On the other extreme, we see a large number of people with dementia who are neglected and even abused as the family cannot cope with the condition.
• What would your suggestions be for government policy regarding the condition?
• Start with making dementia a public health priority in the country
• Inform the states to develop services for people with dementia
• Raise awareness and help fight stigma associated with dementia
• Train caregivers to provide home care
• Focus on building capacity of primary care
• Develop special clinics such as memory clinics for people with dementia to get a diagnosis and also post-diagnostic support
• Work on the concept of developing dementia friendly communities
• Above all focus on prevention of dementia. The recent Lancet report clearly indicates that forty percent of the case of dementia can be prevented or delayed by focusing on the twelve risk factors.
In the low- and middle- income countries, such as India, we have a significantly higher proportion of people living with the risk factors and therefore the potential and impact of prevention strategies will be much higher.
We are unfortunately labeled as the diabetes capital of the world. I was recently associated with the INDIAB study on diabetes and we seem to have a higher prevalence of diabetes than we initially thought. With urbanisation and changing lifestyles, we are getting more and more predisposed to the risk of developing dementia. The good news is that if we promote healthy lifestyle and risk reduction in the country, we will see a significant impact in the reduction of cases in the future. There is a huge difference if one gets dementia at the age of sixty or at a later age of eighty.

Q. Are there any specific alterations to healthcare infrastructure that would be vital to dealing with higher numbers of individuals with dementia?
Do not get tempted to suggest that increasing institutional care will be the way forward for the people with dementia in India. It has a role, but we do not have the capacity to look after the huge numbers in this manner.
We need to understand the potential of primary care in reaching out to the community with strategies for prevention as well as promotion of health and providing post-diagnostic home-based support. We need to have memory clinics on designated days (not necessary every day) to provide diagnosis and post diagnostic support and caregiver counselling. We need to enhance the capacity of existing long term care facilities to look after people with dementia. This can be done with training. We need to enhance and create greater opportunities for cognitive stimulations and social interaction so that people make active aging a part of this life. We need to have specialist and referral services to deal with the behavioural problems in people with dementia. It’s a team effort and dementia care involves a team of doctors, nurses, occupational therapists, psychologists etc.

Q. While social care may be more available in urban locations, how could the inequalities of healthcare infrastructure be best addressed to provide quality healthcare for those with dementia in rural locations?
There are strengths and weaknesses of the availability of care in the urban and rural areas. What we need is to think out of the box and use locally available resources to bridge the treatment gap for people with dementia. You can listen to my TEDx talk on building dementia-friendly communities in India and it will give you an idea that there is hope even in resource-poor settings. There has to be a will and political commitment.