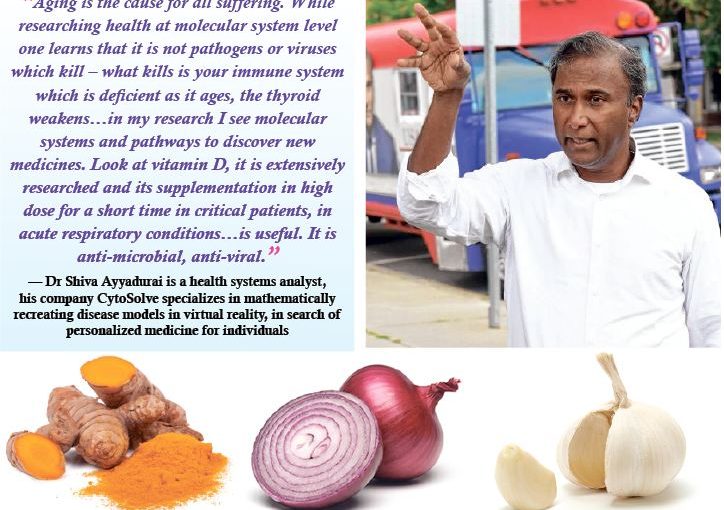 “Aging is the cause for all suffering. While researching health at molecular system level one learns that it is not pathogens or viruses which kill – what kills is your immune system which is deficient as it ages, the thyroid weakens…in my research I see molecular systems and pathways to discover new medicines. Look at vitamin D, it is extensively researched and its supplementation in high dose for a short time in critical patients, in acute respiratory conditions…is useful. It is anti-microbial, anti-viral.”
— Dr Shiva Ayyadurai is a health systems analyst, his company CytoSolve specializes in mathematically recreating disease models in virtual reality, in search of personalized medicine for individuals

I LOVE the way my newly made friend Dr Shiva Ayyadurai confirms that most of us have just got into the habit of eating garbage day in and day out. Every time I listen in to him I kind of shrink at the thought of all the garbage which goes into my own mouth every now and again – hydro fat fried samosa, savory crunchies, easily available refined carbohydrate snacks, even sugary mithai occasionally, biscuits and cookies out of seductive packets, etc, etc, etc. I dare say most of us are engaged in rotten lifestyles whereby dirty food, water and air rules and shapes the quality of our health. Dirty food, dirty water, dirty air! That’s how Ayyadurai puts it repeatedly ad nauseum.
This is to say I’m thoroughly enchanted and have been taking in quite a few of this Ayyadurai’s video series lately on the subject of how badly the infrastructure we live in has deteriorated courtesy ever more corruption ridden quality of governance. Corruption and nepotism is what Shiva Ayyadurai is fighting in the USA too. Life gets so bad for folk lower down the livelihood ladder at ground level. The poorer you are the poorer you eat and the more ill health you suffer, witness the fact that more black people in the USA are succumbing to the current pandemic of Covid-19.
Also I learn that USA has the highest rate of infant mortality with chronic illnesses dogging more than 60 percent of American children! If this is true it is appalling to say the least here. Part of it is to do with the diabolical story of mandated vaccines which starts compromising the immune system from childhood. When one says mandated it means big pharma companies have bought over a government, so children get automatically vaccinated with or without parental consent and it’s not just one or two vaccines we’re talking about here but something like 30 vaccines with more being added on to the roll call of vaccines. The latest bone of contention is the flu vaccine for children.
Mandatory vaccines are a big money spinner for pharma companies and now there is a group for “Shiva for Mothers” where a lot of mothers have come together to exchange notes about their children’s health has been compromised because of spurious and too many vaccines. Autistic and auto-immune-related health problems drag their children down from living a normal life and in fact this huge “Shiva Believes Mothers” movement is being championed and spearheaded by Dr Shiva Ayyadurai to fight for voluntary vaccines instead of mandated or enforced vaccines courtesy retrogressive federal laws based on what he calls “fake science.”
OUR friend Ayyadurai (Indian American inventor of e-mail and systems biologist of repute who’s standing for Senate seat in the forthcoming primary elections in Massachusettes, a most colorful fellow whose campaign I’m following ardently) has the entire mothers’ group supporting his revolution calling for “truth, freedom and health.” His political charter is demanding no more mandatory vaccines – parents have a right to decide how they will bring up their children. Also other things like medical freedom, no more middle men; better infrastructure; so that all may reap the benefits of cleaner air, water and food.

Shiva’s thing is the State should concentrate on improving environment, promoting organic agriculture, cleaning up water bodies and no thrusting vaccines down people’s bodies – amazing, a growing slew of working class Americans are on his side. As I understand it is much like our fight in India between khaas aadmi and aam aadmi out in the USA or so I think; like it or not I’m rooting for this Dr Shiva Ayyadurai’s and hope he wins the forthcoming primary elections for senator’s seat out in Massachusettes in US of A one of these days, and moves on from strength to strength.
HE will surely make changes in the long term interests of American people’s health; it is clear from his videos that he has been introducing some of his home country India’s time tested folk medicine systems like Siddha, which his grandmother used to practice in Tamilnadu. You must read up Ayyadurai and I for one agree with much of what he says, that we’re on our way to being enslaved by the modern State in country after country — including India where we suffer from a herd mentality, too fearful to think independently, stand up to State bullying, brutality and criminal wrongdoing.
It’s time to do a systems check from the bottom-up and to realize that one size does not fit all, especially when it comes to redressing health issues. It’s time mainstream medicine acknowledged our older traditional medicine and health systems which have much that is sound to offer, especially vis-à-vis preventive healthcare which encompasses a whole gamut of herbal remedies, naturopathic therapies, yogasana, meditation and simplification of lifestyle discipline. I’m absolutely on the side of Baba Ramdev when he says do yoga from childhood for it will stand you in good stead later on.
Not preaching extremes here but youth is the time when we do set the foundation of most everything beginning from how we feel, think and act in our own larger interests, which are actually rooted in evergreen collective aspirations and interests. In one of his videos Dr Shiva Ayyadurai reveals how study after study has proved that that who live the longest are not even those who drink clean water, eat clean food and breathe clean air – but those who jell well with their fellow human beings, that is what determines longevity rewards!
The better the quality of our fellowship and humanity the longer we live. People who perennially nurse miserable, solitary, arrogant lifestyles succumb to aging and degeneration more quickly! In this respect all the isolation being enforced on us courtesy this vile so described “Chinese corona virus” pandemic is not conducive to improved health or temperament. So think it over, my friends. Human beings are not born to be enshrined indoors!
We’re animals of the mammal animal kingdom and no matter how civilized we rate ourselves we do better when we spend more time outdoors….wooing vitamin D which plays a vital role in immune health. Do bask 20 to 30 minutes out in the sun daily, not necessarily in blistering hot mid-day sun but glorious morning sunshine which is flooding in these departing monsoon days of August with balmy September setting in.
IN this respect I never tire of reiterating that we need more sanitariums than tertiary hospitals with state-of- the-art air-conditioned ICUs where you will never see a drop of sunshine – hey, remember sunshine is one of the strongest natural disinfectant of bacteria, virus, fungi, depression, thoughts of suicide, etcetera, no? People with TB, poor respiratory illnesses, who are prone to fungal infections – go frolic in the sunshine or better still spend time in sun, sea and fresh air!
Enjoy more of the holidays which folk from sick cities Delhi, Mumbai, Bengaluru, Chennai come to Goa to seek so passionately. It is not for nothing that the first thing I do whenever I return from Mumbai that was Bombay is to take a deep breath of freedom the moment I step out of the airplane or train or bus!
And to stay with some of Dr Shiva Ayyadurai talks on the subject of health, apart from waxing lyrical over black cumin seeds (what we call Shahi jeera out here) he also gets both scientific and lyrical over including garlic and onions, turmeric and black pepper and many other herbs and spices in our eating habits – and may all of them come from organic cultivation sources where soil, water and air is clean. More alkaline than acidic! If what we breathe, drink and eat is more alkaline than acidic than our body beautiful too would be more alkaline than acidic …the more the body’s biological chemistry is on the alkaline side the longer it will stay fighting fit with higher happiness quotients, or so to speak.
Follow Covid-19 protocol as much as you wish but remember that this is not so much about tests, masks and isolation but the quality of our primary immune system; luckily most of us in India do still enjoy better immune system health than folk out in the countries of the West like the USA.
Funny or not funny, once upon a time our poor ate qualitatively better food out in the villages of India, now it is the enlightened rich in our cities who fuss about organic produce and green beverages, Kangan refined water and working out in gyms for fighting! Better to run in gardens of course at the crack of dawn or close of dusk. But when did you last visit a garden in Panaji, my dears? Most of our gardens are sorry affairs, infested with rude plants and sick colonies of dogs languishing in sickness and disease.