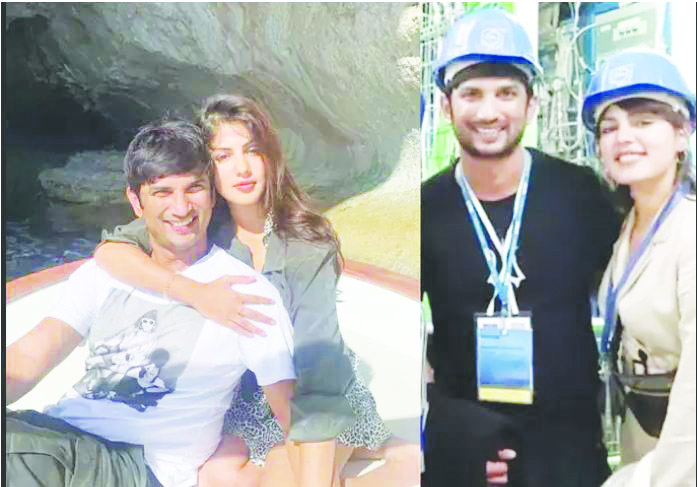 ACCUSED: The main accused in the mysterious death of Sushant Singh Rajput which is now being claimed to be a murder, is his live-in girlfriend Rhea Chakraborty

The Sushant Singh Rajput case has engulfed the whole of Bollywood with established stars accused of blocking the career of newcomers….

The recent debate has been focused on nepotism — the Bollywood “insider” versus the “outsider”. Ironically, the same accusers marginalised and stigmatised Rhea Chakraborty. Someone had to be blamed — she, the easiest target of all. Neither a Bollywood “insider”, nor the successful or famous “outsider”.
Accused by the actor’s family and friends, her victimisation was amplified by a TRP-ridden media in a politically-charged atmosphere, resulting in the registration of an FIR by the Patna police. Isolated by the unsatiated edacious public, she knocked the doors of the last bastion of hope — the Supreme Court.
She filed a petition seeking the transfer of the FIR from the Bihar Police to the Maharashtra Police, under s. 406 of the CrPC. As per procedure, the petition was heard by a single judge. The Court rightly held it did not have the jurisdiction to transfer an “investigation” under s.406. Unfortunately, the Court went on to decide the matter and transfer the case to the CBI. But the Court exercised jurisdiction under Article 142 of the Constitution — a power debatable as to its exercise by a single judge.
Assuming such a power could have been exercised, the Court then erred in holding that the Patna police had jurisdiction on the basis of “part” cause of action arising there. This finding was arrived at on the basis of two reasonings, both alien to criminal law. The first, according to Sushant Singh’s father, “his attempt from Patna to talk to his son on telephone was thwarted by the accused persons” and the loss of his only son who was “expected to light the funeral pyre”. The second reasoning is equally flawed. According to the Court, the Patna police’s jurisdiction was justified in terms of s.181(4) of the CrPC, since there were allegations of criminal breach of trust and misappropriation of money, “which were to be eventually accounted for in Patna (where the complainant resides)”. It remains unclear what the Court meant by “eventually”. There is nothing in the judgment to indicate that the monies were, at the time of the actor’s death, within the jurisdiction of the Patna police. Presumably, this is based on the father being his sole heir and that the monies would “eventually’ fall within the Patna jurisdiction. A perusal of s. 181(4) will reveal that the words “accounted for” can only mean on the date of the offence and not thereafter. Any other interpretation would render its meaning wholly obtuse. Hypothetically, if legal heirs of a deceased person are based in four different states, will each state have jurisdiction?
The errors were further compounded by the application of the power of judicial review, which is again not available to a court sitting singly. According to s.6 of the Delhi Special Police Establishment Act, 1946 the “CBI cannot conduct any investigation without the consent of the concerned state”. The only exception is for constitutional courts in the exercise of their power under Article 32 and 226, to direct the “CBI to take up the investigation within the jurisdiction of the State”. The Court cites the law correctly, but goes on to exercise the power of a constitutional court, which respectfully, it was not.

Despite the technical flaws, there is no quarrel with the object of the Court in handing the matter to the CBI. However, it must be borne in mind that both the Union of India and the CBI were jointly represented in the matter. Further, the CBI as an agency works under the aegis of the Union. In the light of these facts, was it appropriate for the Union to have openly taken sides when the very basis of the judgment was neutrality?
As women lawyers, we are also deeply disturbed by the misogynistic narrative surrounding the young woman in question. What the investigation holds tomorrow no one can say, but to condemn a person without conviction, seeking vigilante justice is reminiscent of “dunking” — you’re damned if you do and damned if you don’t.
Two years ago, Anthony Bourdain, a famous CNN host, tragically took his life, a day after breaking up with Asia Argento. We leave you with the words of their friend, Rose McGowan: “Dear Fellow Humans, […] when a friend dies, it hurts. Many of these people […] are wanting to lash out and blame. […] Do NOT do the sexist thing and burn a woman on the pyre of misplaced blame. Anthony’s internal war was his war, but now she’s been left on the battlefield to take the bullets.”
This article first appeared in the print edition on August 25, 2020 under the title ‘Tragedy As Circus’. Arora is a Senior Advocate and Chawla is a practising advocate and founder of JusContractus