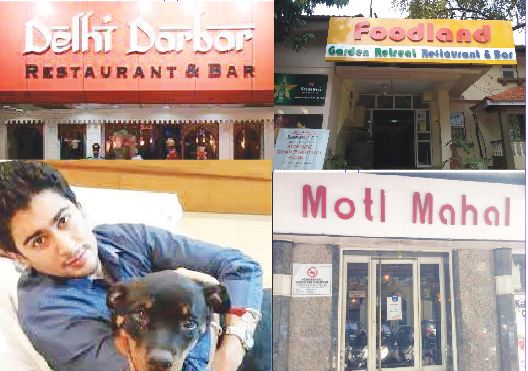 ABUSE: Child abuse cases are very widespread in Goa with even the handicapped being targeted

The son of one of the brothers who owns the Delhi Darbar chain of restaurants in Goa has allegdly been arrested for sexual abuse of a disabled teenager. There is call for a boycott of all the restaurants run by the Nayyars which include Delhi Darbar, Moti Mahal, Foodland and restaurants in Calangute and Candolim….

Child Abuse though a serious offence and a growing menace in Goa; the taboo surrounding this crime is what makes it one of the most difficult and sensitive issue to keep a control over; GoaChronicle.com takes you through a report conducted from 2004 till 2009 by Children’s Right in Goa (CRG) across over 30 schools in Goa involving students of Class 7 aged between ten to fifteen years. It is startling, but more importantly disheartening to see what our children’s views on Child Abuse are;
In 2008, a minor boy was sexually abused by a neighbor. When the matter was referred to court, the offender was granted bail. After a NGO’s appealed to the High Court, the bail application was cancelled and the accused rearrested.
In 2007, a foreigner in Anjuna was arrested by the police for pedophilic activities and case was referred to the crime branch; even though according to the Goa Children Act 2003 any crime against a child is a non-bail able offence, the offender was granted bail by the District Magistrate and is no longer in Goa but is in his foreign domicile.
In the year 2008-2009, CRG had over 102 cases of Child Abuse reported which is significantly higher; when compared to 2007-2008 which had 76 reported cases and double than what was reported in 2006-2007.
For those who continue to believe that Child Abuse is much exaggerated hype by the media. Let us take you through what children between the ages of 10-15 have to say about their experiences and different questions in the survey;

Of all the student questioned, 95 per cent of the lot believe that Child Abuse exists in the society today; either through their own experience, experience they must heard from someone or something they must have read in newspapers or books. But the fact remains that these children believe that the issue of Child Abuse is prevalent in Goa.

When asked about the types of abuse that takes place, not a single child gave a blank response. The children believe physical and sexual abuse rank high in the type of abuses that children experience; at 32 per cent and 31 per cent respectively. While emotional and verbal abuse too are prevalent.

Most children believe that buses and beaches are the areas where children face most abuses. While market, hotel and guest houses; are the other likely places where children are likely to experience untoward incidents. Almost 50 per cent of the children indicated that the abuse occurs in buses, marketplace and school, places that children cannot avoid. And around 40 per cent of the children responded that abuse takes place in tourist spots – beaches, hotels and guest houses.

While the government might continue to turn a blind eye on the growing cases of Child Abuse in the form of Child Prostitution which is a growing menace in the state; children questioned for the survey believe that the most likely offender in child abuse is a tourist, they have accorded 35 per cent to a tourist. The second highest at 14 per cent is a friend; 13 per cent to a neighbor, 11 per cent to a relative and 10 per cent to a religious person indicating that religious institution themselves are privy to some evils committed on children. Half of the children indicated that abuse is committed by people known to them – friends, neighbor, relatives and even religious people, teachers and parents.

Children prefer to take the matter to either FLIP – Friends of Little People (some voluntary units set up by NGOs in schools) and police more than any other. Parents surprisingly don’t feature in the list of reporting the abuse to and teachers are a mere 3 per cent.
The feedback of the children in the CRG Report indicates that child abuse in Goa is widely prevalent and is often committed by persons known to the child, in public places. Tourists too feature in growing number of child abuse cases. But children are afraid to tell their parents and teachers, who are the most significant persons in their lives. Though the children were not asked directly if they have been abused, but about how prevalent abuse is, according to them. The data, therefore does not accurately represent the prevalence of abuse, but gives an idea to the magnitude of abuse, and helps indentify issues that require urgent attention.
In April 2007, CRG had got a report about a case of a 10 year old boy who had stopped going to school and was working in a shack on the beach. He befriended a 65-year old tourist from England who regularly patronized the shack. The tourist often gave clothes and/or money to this child and other boys working in the shack and clicked photographs of the boy on several occasions. He told the boy that he owned a lot of property in England but had no relatives that he could leave it to. The child began to believe that the foreigner truly cared for him and would take him to England – he would live in this wonderful new land. If it was not for the timely interference of a NGO, the fate of the boy would be anybody’s guess. Today, the boy has been counseled and is in school while working to earn a living.
Child abuse might not be out it the open, but it is prevalent and it is important to address this grave issue with the seriousness it deserves. While there does exist Goa Children Act 2003, so far there have not been cases that have seen a conviction on child abuse issues, some continue to remain in courts for years.
The CRG survey was conducted with over 6151 children from 2004-2009 in over 30 schools in Goa. And what they have to say about this menace, definitely deserves a serious thought!